CANCUN, Mexico, December 20, 2016 (Maximpact.com News) – To safeguard the full spectrum of diverse living creatures, the UN Biodiversity Conference opened December 2 with a call to governments and businesses to integrate biodiversity into their practices.

By the time the final gavel struck early Saturday morning, governments from 167 countries had agreed on actions to integrate biodiversity considerations into the forestry, fisheries, agriculture and tourism sectors and to achieve the UN’s 2030 Agenda on Sustainable Development.

Governments followed through on the commitments in the Cancun Declaration made by ministers at the high-level segment of the meeting held December 2 and 3.

Parties agreed to advance mainstreaming biodiversity, the main theme of the meeting proposed by the government of Mexico.

They will work to further capacity development and the mobilization of financial resources as well as actions on specific themes: protected areas, ecosystem restoration, sustainable wildlife management and others. 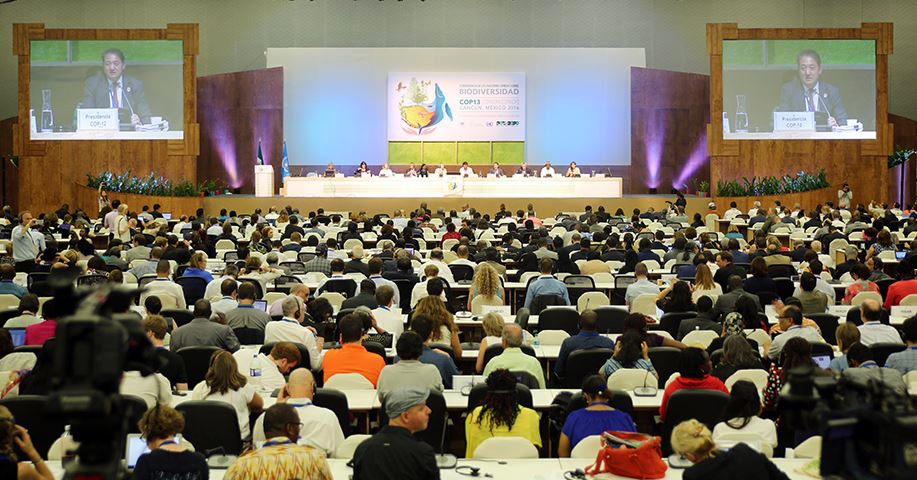 A plenary session during the two-week Conference of the Parties to the Convention on Biological Diversity in Cancun, Mexico, December 2016. (Photo courtesy Earth Negotiations Bulletin) Posted for media use.

Parties agreed to employ an integrated approach that would promote cross-sectoral linkages and links among efforts to implement national biodiversity strategies and action plans and Sustainable Development Goal strategies and plans.

“Governments demonstrated their commitment to achieving the Aichi Biodiversity Targets, and showed that the biodiversity agenda is central and essential to the global sustainable development and climate change agendas,” said Braulio Ferreira de Souza Dias, executive secretary to the Convention on Biological Diversity.

“With the integration of three meetings addressing the Convention and its two Protocols, the world community also realized the importance of the Cartagena Protocol on Biosafety and the Nagoya Protocol on Access to Genetic Resources and Benefit Sharing in effectively contributing to the Targets and sustainable development,” said de Souza.

“We received impressive commitments from governments, including excellent ones from the government of Mexico, in support of many of the Aichi Biodiversity Targets which gives us the momentum we need to achieve our goals by 2020,” de Souza said. 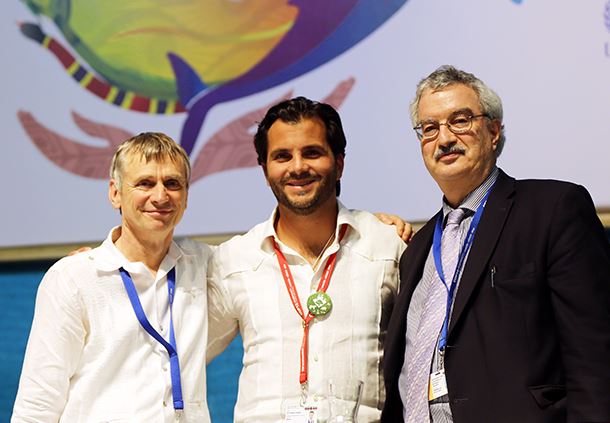 Mexico’s Secretary of Environment and Natural Resources Rafael Pacchiano Alamán said, “The agenda of mainstreaming biodiversity provided Mexico with the momentum to conclude agreements which had eluded us for decades, such as the alignment of agricultural subsidies to preserve forests, or the protection of a vast proportion of our seas.“

In Cancun, the Mexican government announced the creation of a 5.7 million hectare biosphere reserve that will be the country’s largest natural protected area. The Mexican Caribbean Biosphere Reserve will take in virtually the entire coast of the state of Quintana Roo.

“For the next two years, Mexico will work with countries to translate the principles of the Cancun Declaration into legislation, policies and actions to meet the commitments we made,” Pacchiano said.

All stakeholders were encouraged to improve conservation and management of pollinators, such as bees, address drivers of pollinator declines, and work towards sustainable food production systems and agriculture.

COP 13 adopted a short term plan of action on ecosystem restoration, as a contribution to “reversing the loss of biodiversity, recovering connectivity, improving ecosystem resilience, enhancing the provision of ecosystem services, mitigating and adapting to the effects of climate change, combating desertification and land degradation, and improving human well-being while reducing environmental risks and scarcities,” the Secretariat observed.

Parties welcomed a new set of areas described from regional workshops as ecologically or biologically significant marine areas in the Seas of East Asia, the North-West Indian Ocean and the North-East Indian Ocean.

Parties adopted a voluntary specific work plan to maintain and enhance the resilience of ecosystems in cold water areas within the scope of the Convention.

Parties noted the voluntary practical guidance on preventing and mitigating the impacts of marine debris on marine and coastal biodiversity and habitats. The guidance contains actions to enhance understanding of the scale and impacts of marine debris, improve waste management and recycling, reduce the production and consumption of plastics, increase production of environmentally friendlier materials and other actions.

COP 13 adopted a decision that welcomes the Paris Agreement on climate and encourages Parties and other governments, when developing their Intended Nationally Determined Contributions (INSCs) , to fully take into account the importance of ensuring the integrity of all ecosystems. It encourages Parties to take biodiversity into consideration when undertaking climate change mitigation, adaptation and disaster risk reduction measures.

The Parties requested the Executive Secretary to prepare, in collaboration with relevant organizations, voluntary guidelines for the design and effective implementation of ecosystem-based approaches to climate change adaptation and disaster risk reduction.

COP 13 took steps to ensure that traditional knowledge relevant to conservation and sustainable use is protected and its use is encouraged with the consent of indigenous peoples and local communities.

Naoko Ishii, chief executive officer of the Global Environment Facility, the financial mechanism of the Convention on Biological Diversity, was pleased with the progress made in Cancun.

“We applaud and support the global community’s commitment made during this COP to integrate biodiversity considerations into the activities of other critical sectors of our economies: agriculture, fisheries, forestry, and tourism; and value it’s natural capital for sustainable development, as expressed in the Cancun Declaration,” she said.

“We also feel encouraged by the strong support of many donor and recipient countries to maintain consistency with our current biodiversity programming strategy with integrated approaches in response to the Strategic Plan for Biodiversity, while seeking out new innovative and creating financing opportunities,” said Ishii.

Opened for signature at the Earth Summit in Rio de Janeiro in 1992, and entering into force in December 1993, the Convention on Biological Diversity is an international treaty for the conservation of biodiversity, the sustainable use of the components of biodiversity and the equitable sharing of the benefits derived from the use of genetic resources. With 196 Parties so far, the Convention has near universal participation among countries.

The Convention seeks to address all threats to biodiversity and ecosystem services, including threats from climate change, through scientific assessments, the development of tools, incentives and processes, the transfer of technologies and good practices and the full and active involvement of relevant stakeholders including indigenous and local communities, youth, NGOs, women and the business community.

The Cartagena Protocol on Biosafety and the Nagoya Protocol on Access and Benefit Sharing are supplementary agreements to the Convention.

The Cartagena Protocol, which entered into force on September 11, 2003, seeks to protect biological diversity from the potential risks posed by living modified organisms resulting from modern biotechnology. To date, 170 Parties have ratified the Cartagena Protocol.