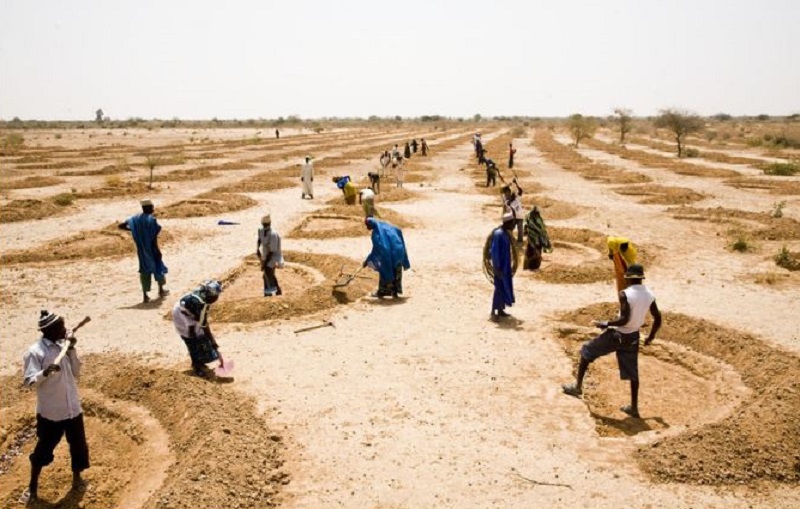 Funding makes possible this cash-for-work and disaster risk reduction project in the West African country of Niger. These half-moon structures in the drought-stricken village of Gobro collect water when it rains, refilling the water table and encouraging the regrowth of vegetation. Oxfam International runs the project in partnership with the local NGO Mooriben and the UN’s World Food Programme. (Photo by Fatoumata Diabate / Oxfam) Creative Commons license via Flickr

NAIROBI, Kenya, May 19, 2016 (Maximpact.com News) – By 2050, the cost of adapting to climate change in developing countries could balloon to $500 billion annually, five times greater than previous estimates, warns a new report from the United Nations Environment Programme (UNEP).

The report calculates the difference between the costs of climate change adaptation in developing countries and the amount of money available to meet these costs – a difference known as the “adaptation finance gap.”

The 2016 Adaptation Finance Gap Report is written by authors from 15 institutions and reviewed by 31 experts. They conclude that failure to cut the greenhouse gas emissions humans are pumping out will send the annual costs of adaptation to climate change skyrocketing into the stratosphere. By 2050 these costs could be up to five times higher than earlier World Bank estimates.

The second in UNEP’s series of Climate Adaptation Gap reports, this assessment finds that total bilateral and multilateral funding for climate change adaptation in developing countries has risen in the five years leading up to 2014, reaching $22.5 billion.

But the report warns that, despite this increase, there will be a major funding gap by 2050 unless new and additional finance for adaptation appears.

“This report serves as a powerful reminder that climate change will continue to have serious economic costs. The adaptation finance gap is large, and likely to grow substantially over the coming decades, unless significant progress is made to secure new, additional and innovative financing for adaptation,” said Thiaw.

Previous estimates place the cost of adapting to climate change at between $70 to $100 billion annually for the period 2010-2050, a figure based on a World Bank study from 2010.

After reviewing national and sector studies, the new report finds that the World Bank’s earlier figures are likely to be “a significant underestimate.”

Adaptation costs are likely to increase sharply over time even if the world succeeds in limiting a global rise in temperatures to below two degrees Celsius by 2100, the report warns.

The United Nations Framework Convention on Climate Change (UNFCCC) has called on developed countries to provide $100 billion annually by 2020 to help developing countries mitigate climate change, and adapt to its impacts, such as drought, rising sea levels and floods.

But the UNEP report warns, “There is no agreement as to the type of funding that shall be mobilised to meet this goal. This hampers efforts to monitor progress toward meeting the goal.”

“The adaptation finance gap is large, and likely to grow substantially over the coming decades, unless significant progress is made to secure new and additional finance for adaptation,” the report concludes.

The Green Climate Fund, an operating entity of the UN Framework Convention on Climate Change’ Financial Mechanism, is mandated to promote a paradigm shift towards low-emission and climate-resilient development pathways in developing countries.

Based in South Korea, the Green Climate Fund has mobilized about US$10 billion and has already made its first investments. It is the largest entity under the financial mechanism of the Paris Climate Agreement, which 195 countries negotiated in December and 170 of them signed April 22 at UN Headquarters in New York.

Green Climate Fund Executive Director Héla Cheikhrouhou said at the signing ceremony, “We need to ensure that the investments GCF makes today and in the years ahead are indeed groundbreaking. We need developing countries and our partner institutions to bring forward project proposals that meet the ambition of Paris, that unlock innovation, and that will truly drive low-emission, climate-resilient development. It is time to convert the words – and signatures – into action!”

To meet finance needs and avoid an adaptation gap, the total finance for adaptation in 2030 would have to be approximately six to 13 times greater than international public finance today, calculates the UNEP report. 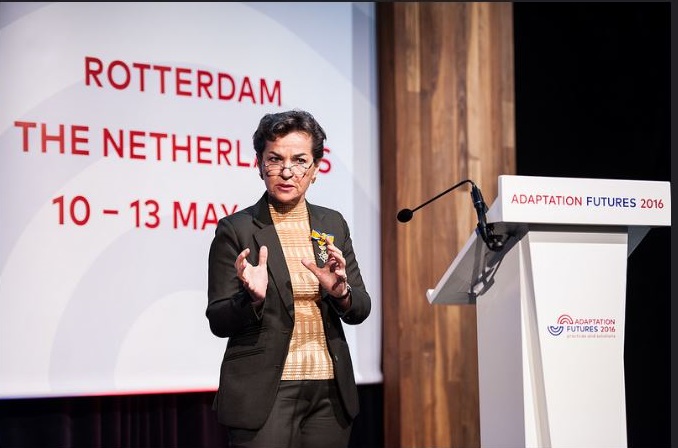 Christiana Figueres of Costa Rica, outgoing executive secretary of the UN Framework Convention on Climate Change, addresses the Adaptation Futures conference in Rotterdam, The Netherlands, May 10, 2016 (Photo by Maartje_Strijbis) Posted for media use.

Adaptation costs are already two to three times higher than current international public funding for adaptation, states the report, which was issued May 10 in Rotterdam at Adaptation Futures 2016, the biennial conference of the Global Programme of Research on Climate Change Vulnerability, Impacts and Adaptation.

Adaptation Futures 2016 attracted over 1,600 participants from more than 100 countries, people from the business community, from governments and nongovernmental organizations, scientists and climate specialists.