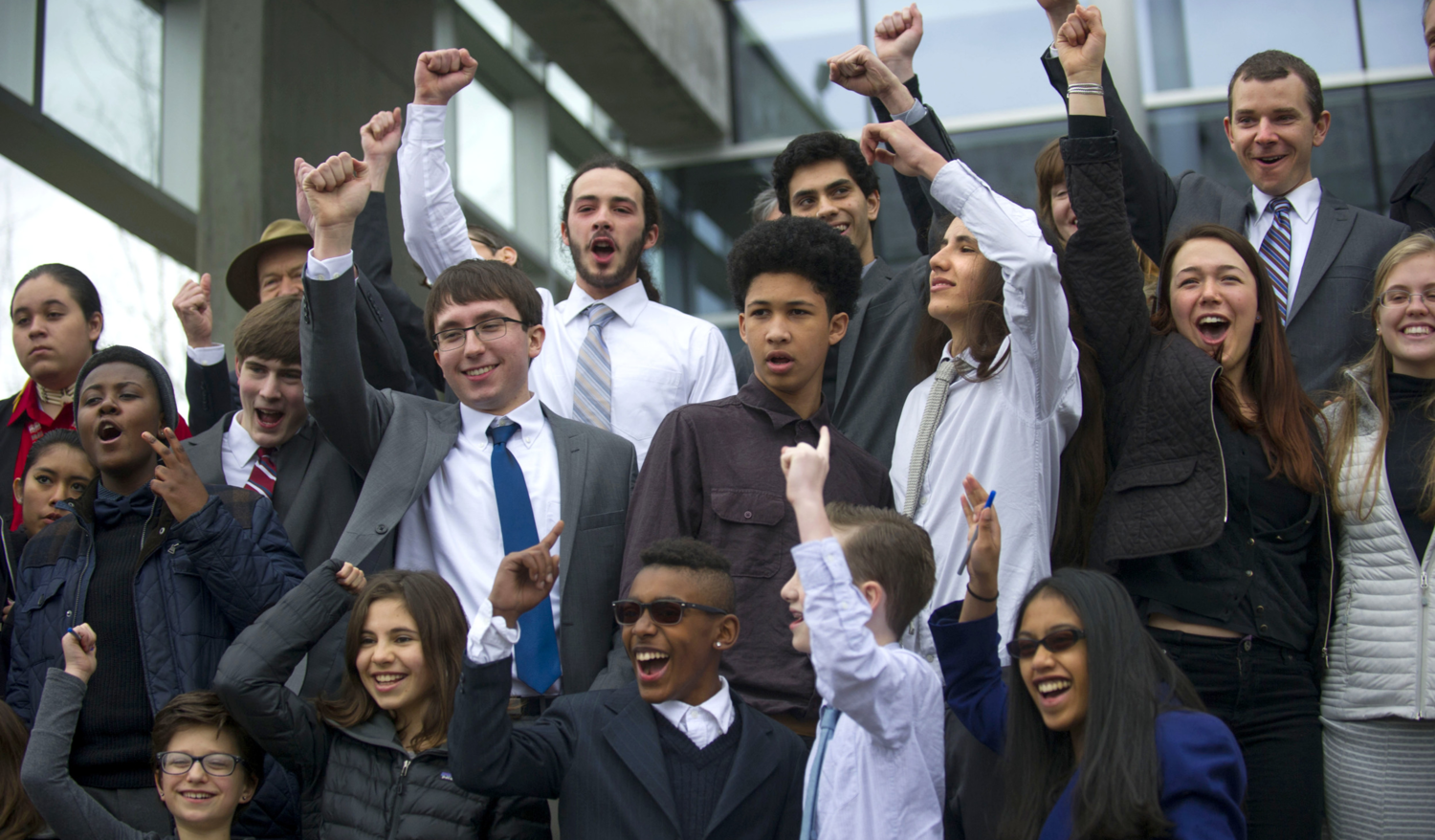 EUGENE, Oregon, August 18, 2016 (Maximpact.com) – A pioneering constitutional climate change lawsuit  is being brought by children, ages 8-19, against the federal government in the U.S. District Court for the District of Oregon in Eugene.

The children argue that in causing climate change, the U.S. government has violated the youngest generation’s constitutional rights to life, liberty and property, and has failed to protect essential public trust resources.

Acting as one of the plaintiffs is world-renowned climate scientist Dr. James E. Hansen, former director of the NASA Goddard Institute for Space Studies (NASA), and currently adjunct professor, Columbia University’s Earth Institute, both in New York City. Dr. Hansen is serving as guardian for future generations and his granddaughter, Sophie, a teenaged plaintiff in this lawsuit.

The plaintiffs are suing the federal government for violating their constitutional rights to life, liberty and property, and their right to essential public trust resources, by permitting, encouraging, and otherwise enabling continued exploitation, production, and combustion of fossil fuels.

The case is one of multiple related legal actions brought by youth in several states and countries, all supported by Our Children’s Trust , seeking science-based action by governments to stabilize the climate system.

Our Children’s Trust is a nonprofit organization, elevating the voice of youth, those with most to lose, to secure the legal right to a healthy atmosphere and stable climate on behalf of present and future generations.

The nonprofit leads a coordinated global human rights and environmental justice campaign to implement enforceable science-based Climate Recovery Plans that will return atmospheric carbon dioxide concentration to below 350 parts per millions by the year 2100.

Julia Olson, lead counsel for the plaintiffs and executive director of Our Children’s Trust, told a magistrate judge in March, “Defendants in essence ask this court to ignore the undisputed scientific evidence, presented in our complaint and in opposing this motion, that the federal government has, and continues to, damage plaintiffs’ personal security and other fundamental rights. But these young plaintiffs have the right to prove the government’s role in harming them has been knowing and deliberate.”

In April, U.S. Magistrate Judge Thomas Coffin of the U.S. District Court in Eugene ruled in favor of the 21 young plaintiffs.

This ruling is now under review by U.S. District Court Judge Ann Aiken, with oral arguments scheduled for September 13, after which the case will either proceed to trial or to appeal.

“I am excited that Judge Aiken is interested in hearing our oral argument this September,” said plaintiff Kiran Oommen, a 19-year-old from Eugene, Oregon. “The U.S. government’s continued support of the fossil fuel industry, despite the obvious high risks, is hurting people all the time and it’s getting worse. … The longer this case lasts, the greater the evidence will be condemning their actions.”

Olson said, “The more these brave young climate advocates appear in court, with the tremendous public support we anticipate for this September 13 hearing, the better. This is another chance to tell the egregious story of this case: that for more than 50 years our government has exploited fossil fuels, hand in hand with industry, knowing it would destroy our climate system and the healthy futures for these young people. We are eager to show the court how these youth’s fundamental constitutional rights are being infringed.”

The intervors argue that the lawsuit is “extraordinary” and “a direct threat to [their] businesses” and that, if the kids win, “massive societal changes” and an “unprecedented restructuring of the economy” could result.

They will try to persuade the judge that the young plaintiffs in this case do not have standing, because climate change is mostly a prediction of harm, and that, even if they are being harmed, climate change is a question for Congress, not the courts, to decide.

Pakistan is feeling the influence of Oregon in its own children’s climate case. It takes the form of legal coaching and counseling from the nongovernmental organization Environmental Law Alliance Worldwide (ELAW), based in Eugene.

ELAW Executive Director Bern Johnson said “ELAW is pleased to collaborate with Our Children’s Trust on this case to raise the voices of youth around the world calling for climate justice. It’s one of many U.S. and international cases in Our Children’s Trust’s global youth-led climate campaign. “We owe it to children and future generations to leave them a healthy climate.”

In an interview with Third Pole Net, Rabab said, “I want the government to give me and my friends a safe environment to grow up in. I want it to help me conserve it for future generations.“

The Court allowed Rabab’s climate case to proceed on behalf of present and future generations.

Our Children’s Trust attorneys worked with Ali to prepare the petition as part of the coordinated youth-led legal climate campaign, with the support of ELAW staff. In particular, ELAW Staff Scientist Mark Chernaik submitted an affidavit to the court in support of Rabab’s case.

Ali has said, “I am invoking the ancient Public Trust Doctrine passed from the Romans into English common law. It’s very simple and states that things like water, air and the seas, which belong to every citizen, have to be protected. The government, as the custodian of our natural resources, cannot exploit it.“