WASHINGTON, DC, November 10, 2016 (Maximpact.com News) – The surprising election of Donald Trump, a Republican and climate denier, to the White House on Tuesday changes the global balance of power on climate change.

The defeat of Democrat Hillary Clinton, a former Secretary of State under President Barack Obama, comes just as delegates to COP22, this year’s annual Conference of the Parties to the UN Framework Convention on Climate Change (UNFCCC) in Morocco, work to implement the Paris Agreement on Climate, which entered into force November 4.

While Clinton supported the Obama administration in making the climate a priority, Trump has called global warming a Chinese hoax.

Trump has said he wants to pull the United States out of the Paris climate accord. Under the agreement, the United States cannot withdraw for four years, but it is possible that the Trump administration could ignore that rule.

Trump has said he wants to repeal all federal spending on clean energy, including research and development for electric vehicles as well as for nuclear, solar and wind power.

With the Republicans in control of both Houses of Congress, this is doable.

These policies would mean the U.S. will burn more coal, oil and gas, resulting in more air pollution and greenhouse gas emissions.

Meanwhile, the world is moving in the opposite direction. At the Morocco climate conference on Tuesday Japan ratified the Paris Agreement, pledging to cut its greenhouse gas emissions by 26 percent from 2013 levels by 2030.

Many country leaders, ministers and top level CEOs are expected to make announcements at the conference’s High Level Event on November 17, including King Mohammed VI of Morocco.

On Wednesday, European Council President Donald Tusk and European Commission President Jean-Claude Juncker sent a joint letter of congratulation to Trump that reminded him of the importance of limiting climate change.

“Today, it is more important than ever to strengthen transatlantic relations,” the presidents wrote. “Only by cooperating closely can the EU and the US continue to make a difference when dealing with unprecedented challenges such as Da’esh, the threats to Ukraine’s sovereignty and territorial integrity, climate change and migration. Fortunately, the EU – US strategic partnership is broad and deep…“ 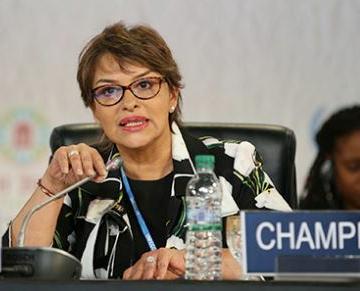 At the launch the new NAZCA portal to track progress on climate action was unveiled. NAZCA captures the commitments to climate action by companies, cities, subnational entities, regions, investors, and civil society organizations.

Corporations are getting on board the climate action train. More than a third of the 2,000 largest companies with aggregate revenues total $32.5 trillion are taking action, according to the Secretariat of the UN Framework Convention on Climate Change, UNFCCC.

More than a third of the 2,000 largest companies with aggregate revenues total $32.5 trillion are taking action.

The Royal Bank of Canada, for instance, has pledged to reduce operational CO2e emissions intensity of properties located in Canada, the United States, and the British Isles by 20 percent per square meter from 2012 to 2018 through increased energy efficiency and renewable energy purchases.

Apple, Bank of America, General Motors and Wells Fargo have all joined the global RE100 initiative of influential businesses committed to obtaining 100 percent of the electricity they need for their operations from renewable sources like wind and solar.

Still, civil society groups are very worried about what will happen to the climate when Trump moves into the White House.

Many nongovernmental organizations believe that a climate denier in the White House is a “death sentence” for grassroots movements and the Global South.

World Resources Institute’s President and CEO Andrew Steer said, “As the new Trump administration comes into office, America must press forward with critical issues that are at the heart of people’s well-being and future prosperity. This includes holding off climate change, investing in clean energy, and revitalizing America with sustainable and resilient infrastructure.“

Wilfred D’Costa from the Asian Peoples’ Movement on Debt and Development (APMDD) said, “For communities in the global south, the U.S. citizens’ choice to elect Donald Trump seems like a death sentence. Already we are suffering the effects of climate change after years of inaction by rich countries like the U.S., and with an unhinged climate change denier now in the White House, the relatively small progress made is under threat.”

“The international community must not allow itself to be dragged into a race to the bottom. Other developed countries like Europe, Canada, Australia, and Japan must increase their pledges for pollution cuts and increase their financial support for our communities,” D’Costa urged.

Friends of the Earth International believes, “The election of Trump is a disaster for climate and especially for the African continent. This is a moment where the rest of the world must not waver and must redouble commitments to tackle dangerous climate change.“

“Africa is already burning,” said Geoffrey Kamese from Friends of the Earth Africa . “The election of Trump is a disaster for our continent. The United States, if it follows through on its new president’s rash words about withdrawing from the international climate regime, will become a pariah state in global efforts for climate action.“

Jean Su with California-based Center for Biological Diversity said, “The Paris Agreement was signed and ratified not by a president, but by the United States itself. One man alone, especially in the 21st century, should not strip the globe of the climate progress that it has made and should continue to make.“

Said Su, “As a matter of international law, and as a matter of human survival, the nations of the world can, must, and will hold the United States to its climate commitments.“

Ceres President Mindy Lubber held out some hope for climate action even under a President Trump.

“The stunning U.S. election results are in, but we should refrain from thinking they will completely thwart climate action and the clean energy economy in the U.S. and around the world,” said Lubber.

“Today’s reality is that the transition to the low-carbon economy is irreversible, inevitable and fully underway. There’s no turning back. More investors and businesses than at any time in history are working to seize the opportunities embedded in this emerging economy,” she said.

Ceres is a non-profit organization that seeks to inspire a powerful network of investors, companies and public interest groups to accelerate and expand the adoption of sustainable business practices and solutions to build a healthy global economy.

“The facts are on our side. Tackling climate change is one of the greatest economic opportunities of the 21st century,” said Lubber. “The business case for climate action and sustainability is stronger than ever, and the climate science is incontrovertible.“

“Short-term political and economic changes will not slow our momentum,” Lubber declared. “We are committed to work with the new administration and our bipartisan allies in Washington. We want to make sure they fully understand what is at stake and to protect the gains that we have achieved in the face of climate change and other sustainability threats. Investors and businesses are now, more than ever, the best messengers to deliver our message.“