This outcome document, together with 1,328 voluntary commitments to action, represents a breakthrough in the global approach to the management and conservation of the ocean.

The commitments address Sustainable Development Goal #14, Life Below Water: Conserve and sustainably use the oceans, seas and marine resources for sustainable development.

“The Ocean Conference has changed our relationship with the ocean,” said President of the UN General Assembly Peter Thomson of Fiji, which co-organized the conference with Sweden.

“Henceforth,” said Thomson, “none can say they were not aware of the harm humanity has done to the ocean’s health. We are now working around the world to restore a relationship of balance and respect towards the ocean.”

Recognizing that the wellbeing of present and future generations is linked to the health and productivity of the ocean, all countries agreed, “to act decisively and urgently, convinced that our collective action will make a meaningful difference to our people, to our planet and to our prosperity.”

The Call to Action recognizes the importance of the Paris Agreement on Climate; countries agreed to develop and implement measures to address the effects of climate warming on the oceans, such as acidification, sea-level rise and increase in ocean temperatures that harm corals and other marine life.

“We are particularly alarmed by the adverse impacts of climate change on the ocean, including the rise in ocean temperatures, ocean and coastal acidification, deoxygenation, sea-level rise, the decrease in polar ice coverage, coastal erosion and extreme weather events,” the UN Member States declared in their Call to Action.

“We acknowledge the need to address the adverse impacts that impair the crucial ability of the ocean to act as climate regulator, source of marine biodiversity, and as key provider of food and nutrition, tourism and ecosystem services, and as an engine for sustainable economic development and growth,” they stated.

The Call to Action includes measures to protect coastal and blue carbon ecosystems, such as mangroves, tidal marshes, seagrass and coral reefs, and wider interconnected ecosystems, as well as enhancing sustainable fisheries management, including to restore fish stocks in the shortest time feasible at least to levels that can produce maximum sustainable yield.

Wu Hongbo, UN under-secretary-general for economic and social affairs and secretary-general of the Ocean Conference, said the conference moved the world closer to the implementation of the Sustainable Development Goals agreed unanimously by UN Member States in 2015. 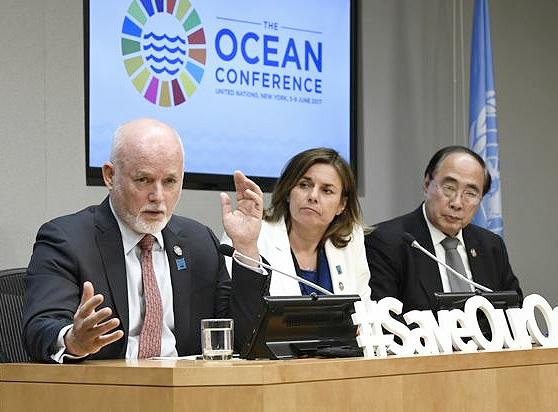 “Participants from member States, NGOs, civil society, the private sector, the scientific community and academia engaged in wide-ranging discussion and shared state-of-the-art knowledge and latest information on marine science and challenges,” Wu said. “They showcased and put forward many innovative solutions, which can help us achieve Sustainable Development Goal 14, and through its interlinkages the other SDGs and targets.”

Among its many voluntary commitments as co-organizer of the Ocean Conference, the Government of Fiji launched the Fiji Whale and Dolphin Action Plan to protect whales and dolphins in Fijian waters. This commitment is a follow-up to Fiji’s declaration of its Exclusive Economic Zone as a whale sanctuary in 2003.

There are 10 confirmed species of whales and dolphins in Fijian waters. Humpback whales breed and calve there, and as many as 15 other cetacean species pass through on their migrations or reside there is small numbers.

But population levels of humpback whales and other whale species are at critically low levels, and the Oceania humpback whale sub-population has been declared endangered.

Sweden, the other Ocean Conference co-organizer, also has made many voluntary commitments to ocean restoration, including a contribution of 50 million SEK (US$5.5 million) to The Blue Action Fund, which makes funding available for the activities of national and international nongovernmental organizations in their efforts to help conserve marine and coastal ecosystems.

The German Federal Ministry for Economic Cooperation and Development (BMZ) in cooperation with KfW Development Bank founded the Blue Action Fund as a response to the funding gap for the conservation of marine biodiversity, networks of marine protected areas and transboundary conservation measures. The Fund will work in Africa, Latin America, Asia and the Pacific region.

“Do what you can, do it wisely, and most importantly do it now. A healthy ocean is not a luxury item. It is a necessity for survival,” Crown Princess Victoria of Sweden told the Stockholm Resilience Centre event on engaging the private sector in SDG 14 held on June 9 at UN headquarters.

“All alarm bells are ringing: We are coming dangerously close to fatal tipping points,” the princess said, emphasizing the critical role of the ocean in sustaining life on Earth. “Taking care of the ocean means taking care of ourselves,” she said.

The Crown Princess spoke at the side event featuring the efforts of nine of the world’s largest seafood companies, members of the science-based sustainability initiative Seafood Business for Ocean Stewardship (SeaBOS).

The princess praised the SeaBOS commitment to sustainable seafood by connecting the global seafood business to science; wild capture fisheries to aquaculture; and European and North American companies to Asian companies.

Conference organizers say commitments made at the conference indicate that the world is on track to designate more than 10 percent of the oceans as Marine Protected Areas by 2020.

Many countries announced steps to reduce or eliminate single use plastics and microplastics that end up in the oceans, where they harm sea birds and animals.

Numerous countries announced that they are stepping up their efforts to reduce the amount of sewage and pollution entering the ocean from land-based activities.

Many commitments focused on expanding scientific knowledge about the ocean and developing and sharing innovative technologies to address ocean challenges.

There were new commitments to protect and manage fisheries. Some countries announced “no-take zones” for certain fisheries.

Commitments were made to establish systems that allow consumers to more easily source sustainable fish.

New commitments were made to combat illegal, unreported and unregulated fishing, and to curtail fishing subsidies that result in depleted fish populations.

In the Call to Action, the UN Member States agreed to develop an “international legally binding instrument” under the UN Convention on the Law of the Sea to govern the conservation and sustainable use of marine biological diversity of areas beyond national jurisdiction, the so-called high seas.

They want the UN General Assembly to decide on the convening and on the starting date of an intergovernmental conference to negotiate this legally binding agreement on high seas governance before the end of its 72nd session on September 25.