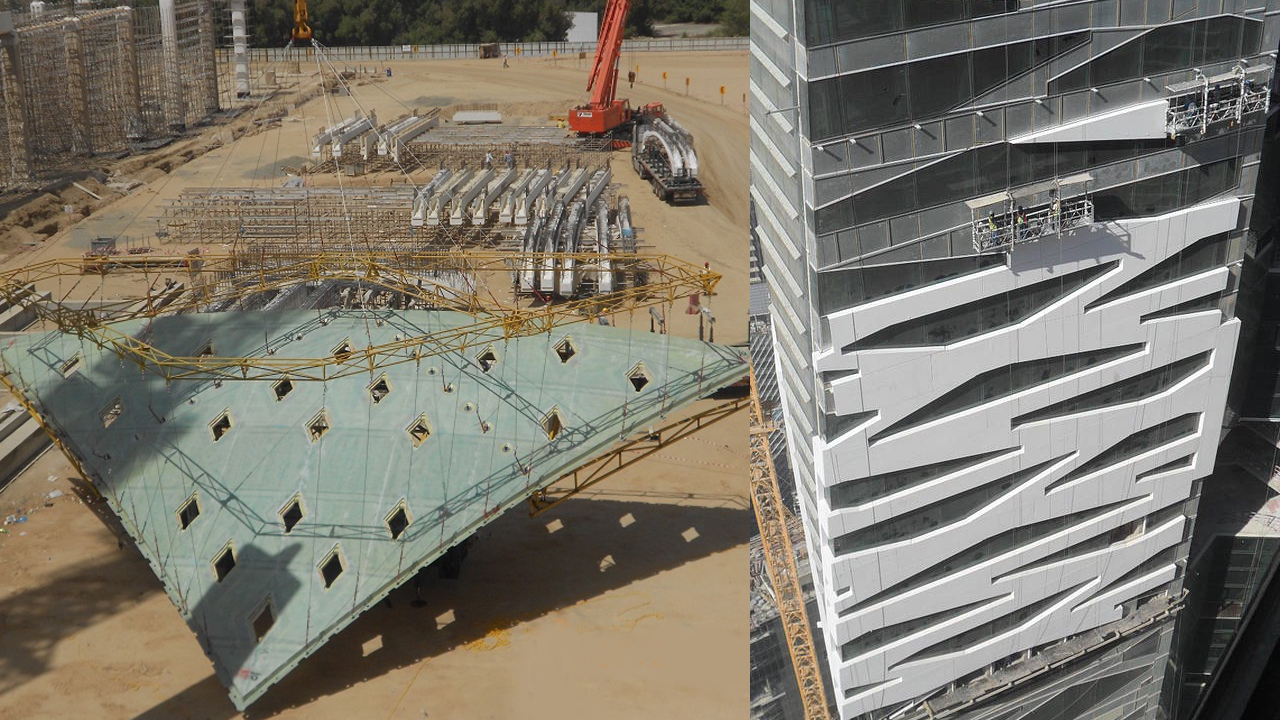 Armacell foam component of the KAFD World Trade Center in the King Abdullah Financial District, Riyadh, Saudi Arabia, is lifted into place. The façade cladding is built out of advanced composite materials and covers a surface area of more than 40.000 m². (Photos courtesy Armacell)

LONDON, UK, May 12, 2017 (Maximpact.com News) – Companies looking for innovative ways to give the circular economy a spin can check out insulation foams producer Armacell, which is giving PET plastic bottles a second life in wind turbine rotor blades.

Polyethylene terephthalate, or PET, is the most common thermoplastic polymer resin of the polyester family. It is made into containers for liquids and foods and used in combination with glass fiber for engineering resins.

Headquartered in Luxembourg, Armacell has started up an extrusion line at its Brampton facility in Ontario, Canada to convert recycled PET resin into PET foam for use in the production of wind turbine rotor blades.

Around 75 percent of Armacell’s PET foam makes up the core for the blades, with some 50,000 PET bottles converted to form the core of a single wind turbine.

The first of its kind in Canada, the new extrusion line joins similar Armacell PET foam extrusion lines in Belgium and the United States. Armacell plans to install a PET foam line in China and launch production by the end of 2018.

The company estimates that its ArmaForm PET is already used in more than 30,000 wind turbine blades globally. Among their many uses, Armacell foams made from PET bottles can also be used for insulation in buildings and ships.

The circular economy is becoming a driving force, particularly in the plastics sector, now that the business community is getting involved.

The report sets forth an action plan to increase recycling or reuse of all plastics packaging globally to 70 percent, up from today’s recycling rate of 14 percent.

Led by the Ellen MacArthur Foundation , headquartered on the Isle of Wight in the UK, the initiative is bringing together companies, governments, NGOs, scientists, students and citizens to build a global plastics system that works.

The foundation defines a circular economy as one that is “restorative and regenerative by design, and aims to keep products, components, and materials at their highest utility and value at all times.”

Unilever in January committed to ensuring that all of its plastic packaging is fully reusable, recyclable or compostable by 2025. Unilever called on the entire fast-moving consumer goods industry to accelerate progress towards the circular economy.

Paul Polman, Unilever CEO, said, “Our plastic packaging plays a critical role in making our products appealing, safe and enjoyable for our consumers. Yet it is clear that if we want to continue to reap the benefits of this versatile material, we need to do much more as an industry to help ensure it is managed responsibly and efficiently post consumer-use.”

Swiss group Nestlé and its French rival Danone are partnering to create a greener plastic bottle. The food and drinks companies are funding Origin Materials, a Californian biotech company to develop plastic made from waste such as sawdust or old cardboard instead of petroleum.

The Coca-Cola Company may have tried to identify itself with the circular economy, but Greenpeace says the company is not doing enough to protect the Earth from its plastics.

On April 10, Greenpeace activists blocked the entrance to Coca-Cola’s UK headquarters in London with a giant sculpture featuring a seagull regurgitating plastic, and demanded that the company do more to help prevent plastic pollution.

The campaign group said the sculpture, which depicts an idyllic family beach scene interrupted by birds choking on plastic, was intended to highlight what it claims are failings by the company.

In a report “Choke – The case against Coca-Cola“released April 10, Greenpeace claimed that Coca-Cola, the world’s largest soft drinks company, sells more than 100 billion plastic bottles every year. Single-use plastic bottles make up nearly 60 percent of the packaging produced by the company globally, the report says.

“Coca-Cola is always keen to emphasize the importance of recycling to its customers, but is failing to substantially increase the amount of recycled material it uses to make its own bottles globally,” Greenpeace said in its report.

Coca-Cola says a drop in oil prices reduced the cost of virgin plastic, which made recycled PET uptake a challenge.

The Circular Economy Package consists of a program of action, with measures covering the whole cycle: from production and consumption to waste management and the market for secondary raw materials, complete with a timeline through 2030.

The proposed actions will contribute to “closing the loop” of product lifecycles through greater recycling and re-use, and bring benefits for both the environment and the economy, the Commission says.

The revised legislative proposals on waste set clear targets for reduction of waste and establish an ambitious and credible long-term path for waste management and recycling.

Key elements of the revised waste proposal include:

Finally, a key element of the proposal is economic incentives for producers to put greener products on the market and support recovery and recycling schemes for packaging, batteries, electric and electronic equipment and vehicles.