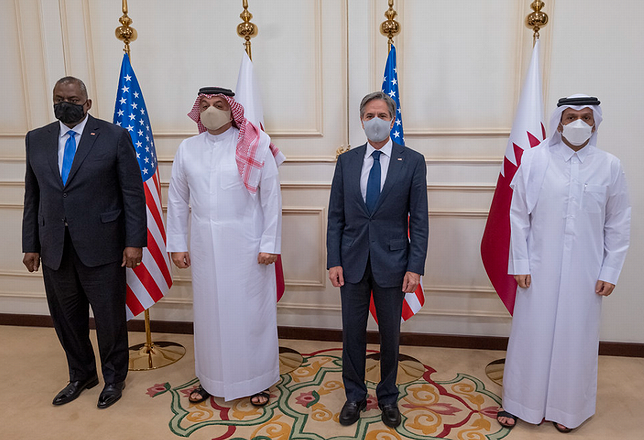 LONDON, UK, September 7, 2021 (Maximpact.com Sustainability News) – A cross-government effort is under way, dubbed Operation Warm Welcome, to ensure Afghans arriving in the United Kingdom receive the vital support they need to rebuild their lives, find work, pursue education and integrate into local communities. The United States is welcoming too, but differently.

Prime Minister Boris Johnson said, “We owe an immense debt to those who worked with the armed forces in Afghanistan and I am determined that we give them and their families the support they need to rebuild their lives here in the UK.”

“I know this will be an incredibly daunting time, but I hope they will take heart from the wave of support and generosity already expressed by the British public,” Johnson said.

As part of the New Plan for Immigration, the government announced that those coming to the UK through resettlement routes would receive immediate indefinite leave to remain, and on September 1, Home Secretary Priti Patel announced that this will apply to Afghans who worked closely with the British military and UK government in Afghanistan, and risked their lives in doing so. They can now stay in the UK without any time restrictions.

“We owe a great deal to the brave Afghans who worked alongside us and we want to make sure they have certainty and stability to be able to thrive in the UK. As part of the New Plan for Immigration, I committed to providing refugees who make their home here the ability to rebuild their lives in the UK with essential support to integrate into the community, learn English, and become self-sufficient,” Patel said.

“By providing immediate indefinite leave to remain we are ensuring that those who have fled their homes have every opportunity to look to the future with stability and security and make a success of their new life in the UK,” he said.

People already relocated to the UK under the Afghanistan Relocations and Assistance Policy (ARAP) will be able to apply free of charge to convert their temporary leave into indefinite leave. This will give Afghans the certainty and stability to rebuild their lives with unrestricted rights to work and the option to apply for British citizenship in the future.

To give children and young adults the best start in life the government is making at least £12 million available to prioritise additional school places so children can be enrolled as soon as possible, and to provide school transport, specialist teachers and English language support to assist with learning.

Further funding will be provided for up to 300 undergraduate and postgraduate scholarships for Afghans at UK universities and adults will also be able to access English language courses free of charge. While many will speak English through their work with the UK government and British forces, and as translators, language classes will ensure all their family members can fully integrate into their local communities.

Afghan Resettlement Minister Victoria Atkins said, “Operation Warm Welcome is a huge effort across government to make sure that those fleeing Afghanistan are able to make a success of a new life in the UK. The stability of indefinite leave, the security of access to healthcare and the opportunity of education are the foundation upon which those resettled to the UK can build.”

Families who need support navigating the system will also have access to liaison officers who can work with local authorities to help them get set up with a GP, National Insurance number, school place, accommodation and more tailored support, as required.

The support for Afghan arrivals follows the largest and most complex evacuation in living memory. It includes:

Health and Social Care Secretary Sajid Javid said, “This support package will help Afghan evacuees start a new life in the UK and I’m proud we are providing £3 million to ensure they receive the healthcare they need. This includes access to prescriptions, wound care and dressings, maternity care, mental health support, and screening for infectious diseases. We will also offer the protection of a COVID-19 vaccination as they settle and rebuild.”

The United States Is Welcoming Too, But Differently

Mohammad Khalid Wardak, a former high-profile Afghan national police officer, spent years working alongside the U.S. military. After the fall of Kabul on August 15, he was hunted by the Taliban. The U.S. and its allies had only minutes to get Khalid, his wife and their four boys to an escape helicopter, according to the “Stars and Stripes,” a U.S. military publication. 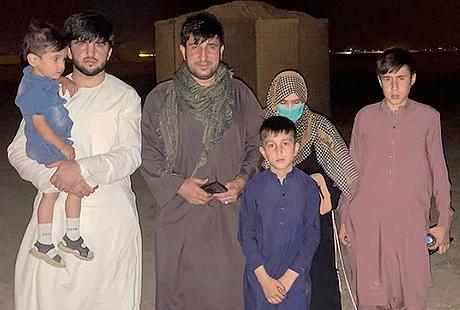 Former Afghan national police officer Mohammad Khalid Wardak and his family wait in an undisclosed location for a flight out of Kabul, Afghanistan. August 18, 2021 (Photo credit unknown, provided to the Voice of America)

The family was flown to an undisclosed location in Kabul and then to Kuwait. Less than three weeks later, the warrior who once directed resistance against the Taliban from a hospital bed had settled with his family in the United States.

Khalid spent his first days in Washington walking around the city and spending time with his family at a park. The children of a government official baked cookies for his family. They went on a shopping trip to Walmart for clothes.

Khalid hopes to meet this week with Senator Chris Coons who helped lead the effort to rescue him and with immigration attorneys to begin the process of becoming an American citizen.

Khalid said he wants to learn English, pursue a degree in computer engineering and spend more time with his family, something he couldn’t do in Afghanistan. “I spent a lot of time at war,” he said. “This is the first time that I’m home safe with my family.”

U.S. Secretary of State Antony Blinken thanked everyone involved in settling Afghan evacuees on August 31, 2021, the day the United States flew its last military flight out of Afghanistan, ending a 20 year military effort.

“I want to thank our allies and partners. This operation was a global endeavor in every way,” said Secretary Blinken on September 6. Many countries stepped up with robust contributions to the airlift, including working by our side at the airport. Some are now serving as transit countries, allowing evacuees to be registered and processed on the way to their final destinations. Others have agreed to resettle Afghan refugees permanently, and we hope more will do so in the days and weeks ahead. We are truly grateful for their support.”

The United States mobilized an unprecedented, global effort through our diplomatic channels to evacuate U.S. citizens, personnel from partner nations, and at-risk Afghans from Kabul. In total, the United States and its partners relocated more than 124,000 people to safety, including 6,000 U.S. citizens.

With support from partners and allies, Blinken says the United States put together a global network – consisting of more than two dozen countries spanning four continents – with total temporary transit capacity of 65,000 people on a rolling basis, including up to 2,000 spaces to accommodate persons that need longer-term processing.

U.S. temporary transit locations in the Gulf have the capacity to process some 37,000 people on a rolling basis, and more than 65,000 people have already been processed through the Gulf, bound for the United States or further processing at European sites.

The temporary transit locations the United States has established at U.S. or joint bases in Europe have capacity to process at least 28,000 people on a rolling basis, Blinken said.

The U.S. Embassy in Kabul suspended all operations on August 31, 2021. While the U.S. government has withdrawn its personnel from Kabul, the United States will continue to assist U.S. citizens and their family members in Afghanistan from Doha, Qatar.

Secretary Blinken said the United States will also continue its efforts to help Lawful Permanent Residents, as well as the many Afghans who have stood with the U.S. over the years, who are seeking to leave Afghanistan.

“Our commitment to the people of Afghanistan is enduring. We will continue to press for an orderly transition of power to an inclusive government with broad support, especially women and minorities. We will use every diplomatic, economic, political, and assistance tool at our disposal to uphold the basic rights of all Afghans; support continued humanitarian access to the country; and ensure the Taliban honors its commitments,” Blinken said.

The Embassy will continue to provide information via the Smart Traveler Enrollment Program (STEP), the Embassy web page, State.Gov, and Facebook and Twitter. Consular services remain available outside Afghanistan. To locate the nearest U.S. Embassy or Consulate click here.

In an email to the Voice of America news outlet, a State Department spokesperson said on background that individuals and their families granted special immigrant status by the Department of Homeland Security will receive some resettlement benefits.

Those paroled into the country will be provided initial relocation assistance through local agencies participating in the Afghan Placement and Assistance Program.

“Through this program, individuals will be placed in communities across the country to begin to rebuild their lives,” the State Department official wrote. “The agencies will provide assistance with critical needs such as housing, enrolling children in school, and basic necessities such as food, clothing, and furnishings during the first 30-90 days in their new communities.”

The official also said a one-time $2,275 stipend is provided to the local resettlement agencies, where $1,225 is available for agencies to use for housing and other needs.

Specifically, housing, food, clothing, legal assistance, medical services, as well as interpretation services in the Dari and Pashto languages, are most critically needed at this time in resettlement locations, the U.S. Department of Homeland Security says.

Business, philanthropies, and NGOs seeking to address urgent needs may contact DHSImpact@hq.dhs.gov to let them know how your organization can help.

Organizations interested in assisting with longer-term needs, such as economic integration of those who have arrived from Afghanistan may contact AfghanPartnerships@state.gov.