NAIROBI, Kenya, February 19, 2021 (Maximpact.com News) – Kenya’s national government and the country’s 47 lower level county governments are jointly establishing a plastic waste management program – one that could be scaled and replicated across the East African community and beyond. It’s just the latest step in Kenya’s evolving journey from a plastic-strewn country to one of the cleanest in Africa.

Like many countries, Kenya has long struggled with plastic waste, which fouls its once pristine Indian Ocean coast and often finds its way into its lakes. In Mombasa, the country’s second-largest city with some two million residents, 3.7 kilos (eight pounds) of plastic per person are estimated to have entered local bodies of water every year.

It appears that Kenya is now gaining the upper hand in this struggle. Kenya was among the first countries in East Africa to limit single-use plastics and sign the Clean Seas initiative to rid waterways of plastic waste.

Plastic bags take hundreds of years to degrade. Discarded by the billion each year, they are a problem worldwide, blamed for turning the oceans into garbage gyres and killing marine life.

In 2017, Kenya put in place a rule that punishes anyone making, selling or importing plastic bags with a maximum four years in jail or a $19,000 fine. 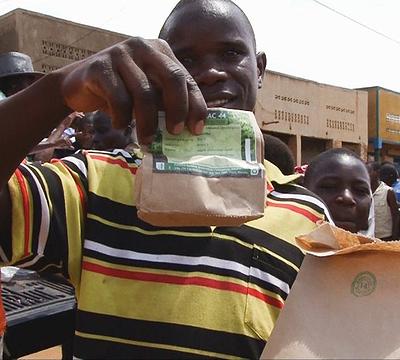 In Rwanda markets, purchases are packed in paper bags. 2013 (Photo by Harvest Plus) Crative Commons license via Flickr

Now, the rejection of single use plastics is growing popular around the world. Rwanda was first in Africa. Since 2008, it has been illegal to import, produce, use or sell plastic bags and plastic packaging in Rwanda except within specific industries like hospitals and pharmaceuticals.

More than 40 countries now have banned, restricted or taxed the use of plastic bags, including China, France and Italy.

Though at least 15 African countries have enacted some sort of ban, many still have plastic bags littering roads, stuck in drains or in trees.

She called the country’s efforts to stem the flow of plastic into its waterways an important step in reducing marine litter. “Kenya has invested heavily in both policies and law enforcement to win the fight against plastic pollution. The result of this investment is today boosting Kenya’s environmental stewardship in Africa and the world,” said Biao.

Her comments came during the virtual convening of the fifth session of the UN Environment Assembly, the planet’s top environmental decision-making body.

Every two years, the assembly unites the UN’s 193 Member States, policy-makers, civil society, scientists and the private sector to take action on urgent environmental issues. Plans call for the virtual session in February 2021 to be followed by an in-person meeting in Nairobi in 2022.

It’s not just its fight against plastic that makes Kenya a green pioneer. The country was also an early adopter of the Green University Initiative. For over a decade, universities around the country have focused on greening their campuses, while enhancing student engagement and learning. Higher education offerings in environmental science, management and policy are also available at both public and private institutions.

By expanding its efforts to green its economy, Kenya could use sustainability to power economic growth, create jobs and lift people out of poverty.

“Since the commencement of our engagement with polythene bags and PET bottles, Kenya has witnessed increased investment in plastic recycling and several new players have come onboard,” Chris Kiptoo, principal secretary, Ministry of Environment and Forestry, Kenya, told the UN Environment Assembly.

“We have upscaled environmental awareness on plastic pollution together with our partners and are proud of initiatives such as the FlipFlopi, which has demonstrated successful recycling of plastics,” Secretary Kiptoo said.

The FlipFlopi is a circular economy movement based in East Africa whose vision is a world without single-use plastic. Founded by Ben Morison, the group showcases alternate uses of waste plastic and the viability of a circular economy in Africa through education programs, innovation hubs, advocacy and governance programs.

Their best-known showcase is a plastic dhow, a boat that celebrates the centuries-old craft of dhow building central to the Swahili culture of Kenya’s coastal region.

Ten tonnes of plastic flip flops, all collected from the Kenyan coast, were melted, shaped and carved by the team just as they might do with wood. Clad in 30,000 flip flops, the most common item found during beach clean ups, the dhow, aptly named “The Flipflopi,” is over nine meters (29 feet) long and weighs seven tonnes. It is a world first.

Over a four week period in March 2021, FlipFlopi anticipates doing at least 10 major events in the three countries – Kenya, Tanzania and Uganda – that border Lake Victoria, Africa’s largest lake and the chief reservoir of the Nile River. They will meet with business leaders, community leaders, conservationists, policy-makers and school children to highlight the impact of plastic pollution on Lake Victoria and what we can all do about it.

Through events, community engagement and mainstream media that reaches over 200 million people, the FlipFlopi team intends to:

* – Highlight the upstream impacts of such pollutants on the lake environment and human health.

* – Engage with communities at large around the lake in order to promote circular economy principals relating to both plastic and non-plastic pollutants through promoting traditional values and principles already inherent in the cultural framework.

* – Showcase and promote the spirit of innovation and human ingenuity through the Flipflopi Boat and promoting other local innovations within the surrounding communities.

People love the colorful plastic dhow, and they’re working out solutions at the county level to keep single-use plastics in check. And that is how positive social change can be made.