Athletes to Revive Biodiversity With Sports for Nature Framework 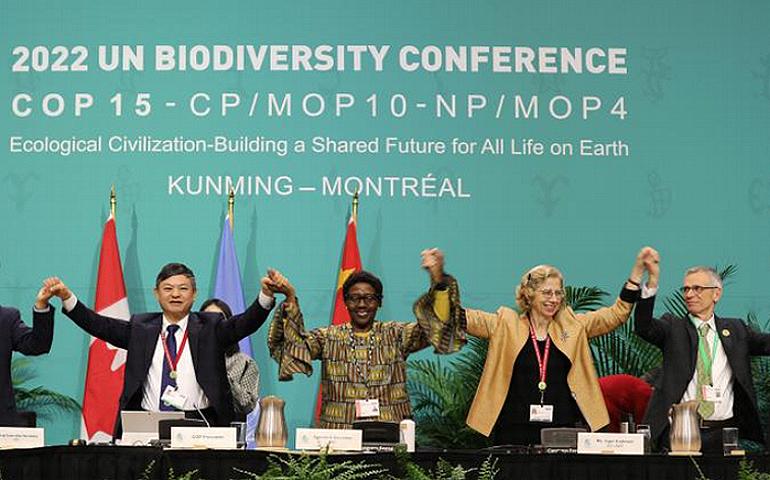 MONTREAL, Quebec, Canada, December 22, 2022 (Maximpact.com Sustainable News) – The International Olympic Committee, IOC, and 22 other global sports organisations have signed the first-ever Sports for Nature Framework as a separate initiative linked to the Convention on Biological Diversity’s new agreement adopted in Montreal on Monday to protect 30 percent of Earth’s land, water and oceans by 2030.

The Sports for Nature Framework aims to deliver transformative action for nature across sports by 2030 and beyond. Signatories pledge to adhere to four key principles that will safeguard nature and contribute to the new global goals for biodiversity.

Executive Secretary of the Convention on Biological Diversity Elizabeth Mrema said, “There is an urgent need to halt biodiversity loss by 2030 and everyone, including sports and recreation, must play a role. The Sports for Nature Framework is a step in the right direction. It is encouraging to see this level of commitment from sports federations, leagues, clubs, and events, and I challenge all sports organisations to follow suit by taking urgent action for biodiversity.”

This initial Sports for Nature Framework was co-created by the International Olympic Committee, the International Union for Conservation of Nature, IUCN, and the United Nations Environment Programme, UNEP, in collaboration with the Secretariat of the Convention on Biological Diversity.

Ecosystems Director for UNEP Susan Gardner says time is running out to take action. “Already this season, eight major winter sports events have had to be canceled as the playing fields for sport that we used to take for granted are literally melting away. We hope that this new framework can secure support from the whole of the sporting family to take action for nature. We have no time to lose.”

More than 100 representatives from international sports federations, national Olympic Committees, regional and national associations, local teams and athletes, along with experts from academia, non-government organizations, science advisors and sports sustainability consultants, provided input on the Sports for Nature Framework. Their input was gathered during six formal consultations in November, through an online form and individual consultations.

The Sports for Nature Framework is inspired by and informed by the UN-led Sports for Climate Action Framework, co-launched by UN Climate Change and the IOC in 2018.

Biological diversity, or biodiversity, is the variety of life on Earth, in all its forms, from tiny organisms such as genes and bacteria to entire ecosystems such as forests or coral reefs. The biodiversity we see today is the result of 4.5 billion years of evolution, increasingly influenced by humans, according to the United Nations.

Biodiversity forms the web of life that humans depend on for so many things: food, water, medicine, a stable climate, and economic growth, among others. Over half of global GDP is dependent on nature. More than a billion of the planet’s eight billion inhabitants rely on forests for their livelihoods. Land and the ocean absorb more than half of all planet-heating carbon emissions.

But nature is in crisis. Up to one million species are threatened with extinction, many within decades, according to an authoritative 2019 report by the Intergovernmental Science-Policy Platform on Biodiversity and Ecosystem Services (IPBES).

Irreplaceable ecosystems like parts of the Amazon rainforest are turning from carbon sinks into carbon sources due to deforestation. And 85 percent of Earth’s wetlands, such as salt marshes and mangrove swamps which absorb large amounts of carbon, have disappeared.

As a workshop report from IPBES stated last year, “Limiting global warming to ensure a habitable climate and protecting diversity are mutually supporting goals, and their achievement is essential for sustainably and equitably providing benefits to people.”

So, both climate change and biodiversity loss negatively affect each other. Increased temperatures as a result of greenhouse gas emissions leads to oxygen depletion and acidification of marine environments, which has a huge negative effect on underwater biodiversity. Conversely, the loss of healthy ecosystems, such as rainforests, which help cool the planet, only speeds up the pace of climate change.

The main driver of biodiversity loss remains humans’ use of land – primarily for food production. Human activity has already altered over 70 per cent of all ice-free land. When land is converted for agriculture, some animal and plant species may lose their habitat and face extinction.

On land, higher temperatures have forced animals and plants to move to higher elevations or higher latitudes, many moving towards the Earth’s poles, with far-reaching consequences for ecosystems. The risk of species extinction increases with every degree of warming.

And climate change is playing an increasingly important role in the decline of biodiversity. Climate change has altered marine, terrestrial, and freshwater ecosystems around the world. It has caused the loss of local species, increased diseases, and driven mass mortality of plants and animals, resulting in the first climate-driven extinctions.

Inger Andersen is executive director of the UN Environment Programme, UNEP and immediate past director of the International Union for the Conservation of Nature, IUCN. She told the 15th Conference of the Parties to the Convention on Biological Diversity, COP15, opening session in Montreal on December 7, “Nature provides the very essence of life. Technology cannot replace the trees, the soil, the water, and the species that teem in them. We have no other world to flee to. When the web of life falls, we fall with it.”

The more than 12,000 delegates in Montreal, representing 196 world governments, responded by adopting the first global agreement to protect at least 30 percent of global lands and waters by 2030.

The sports community is a special case, because many of the organisations in the new Sports for Nature Framework play games or participate in activities that directly depend on the health of the natural world.

There’s a swell of enthusiasm for safeguarding the environment among the parties to the Sports for Nature Framework.

World Sailing CEO David Graham said, “Sailing operates close to the natural world and the people who take part in our sport are often passionate guardians of their environment. This relationship means that we at World Sailing are proud to be a part of Sports for Nature, and we are committed to working with others to protect the places where our sailing communities live, work and play.”

Through its own Sustainability Agenda 2030, World Sailing has set 56 different targets in six main operational areas ranging from water quality and single-use plastics to reducing its carbon footprint and contributing to the health of marine biodiversity, as well as participation and gender equality.

The world’s first all-electric raceboat championship, the E1 Series, is a Sports for Nature Framework founder. Just as Formula E and Extreme E have acted as catalysts for change in the automotive industry, E1 aims to make electric boats more accessible and more affordable, which in turn will reduce water pollution and help restore marine habitats.

We Play Green, with its inspiring story, is an independent, nonprofit global football movement established by Norwegian professional footballer Morten Thorsby, who currently plays with the German club Union Berlin and for the Norwegian National team.

The organisation’s stated purpose is “to mobilize the global football family to support the Green Shift,” That’s the transition to a sustainable world whose economy, infrastructure, and societal actions align with the United Nations’ Sustainability Development Goals (SDGs).

We Play Green has teamed up with the World Wildlife Fund (WWF) in their #TeamEarth campaign, which calls on world leaders to commit to a comprehensive global nature protection plan and reversing nature loss by 2030. “If we can get a quarter of the football family onboard the Green Shift, we are close to being saved,” We Play Green says on its website. “If we get the majority onboarded, the future will be bright again.”

UNEP’s Sports for Nature report released in November found that around 70 percent of the sports organizations surveyed said they are interested in taking action for nature as some are already doing on climate.

Dona Bertarelli, a sportswoman, philanthropist, IUCN Patron of Nature and founder of Sails of Change, said, “Sports organizers, administrators, clubs, participants, sponsors and fans are increasingly looking for sport to become a net contributor to the protection and restoration of nature. The new Sports for Nature Framework will help sports not just to mitigate their negative impacts on biodiversity, but to become nature-positive.”

Held at Montreal’s Palais des Congrès from December 7-19, representatives of 188 governments on site – 95 percent of the 196 Parties to the Convention on Biological Diversity, as well as two non-parties – the United States and The Vatican – finalized and approved the Kunming-Montreal Global Biodiversity Framework to halt the ongoing loss of terrestrial and marine biodiversity and move humanity towards a sustainable relationship with nature, with clear indicators to measure progress. 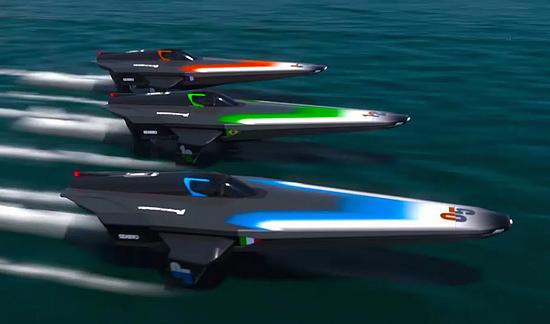 Electric racing boats on an inaugural run. Speeds reach 50 knots (93 km/h, 58 mph) That is far from the 250-km/h (155-mph) top speeds of the gasoline-powered F1H20 class, and there are many speedboats and cigarette boats capable of going much faster. However, electric boating is challenging, and this is a start, says E1 Series. July 7, 2021 (Photo courtesy E1 Series). Posted for media use.

Among the global targets for 2030 included in the Kunming-Montreal Global Biodiversity Framework, which is separate and more comprehensive than the Sports for Nature Framework are these important pledges:

Warns the Global Biodiversity Framework document, “Without such action, there will be a further acceleration in the global rate of species extinction, which is already at least tens to hundreds of times higher than it has averaged over the past 10 million years.”

In Montreal, UNEP Executive Director Andersen stressed that implementation is now key, saying, “Success will be measured by our rapid and consistent progress in implementing what we have agreed to. The entire UN system is geared to support its implementation so we can truly make peace with nature.”