Automated Cars Are Coming, Ready or Not 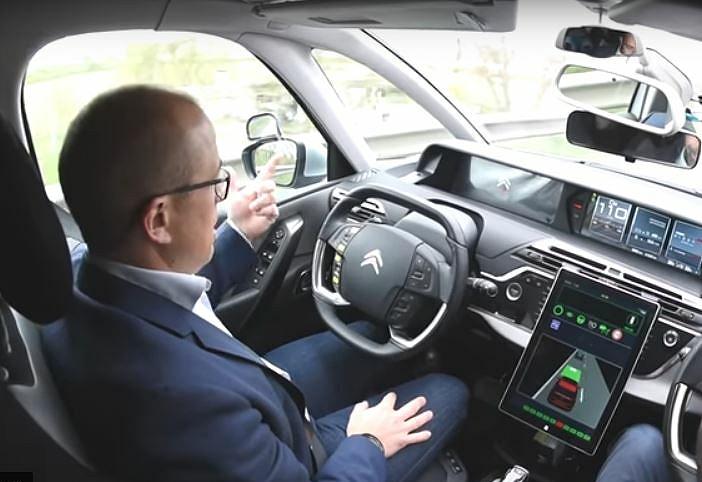 Non-expert driver takes the wheel of a PSA self-driving car for the first time in Europe at Velizy, France, the PSA Group’s Technical Center. March 28, 2017 (Screengrab from video courtesy PSA) posted for media use

AMSTERDAM, The Netherlands, August 15, 2017 (Maximpact.com News) – Deep learning, an advanced form of artificial intelligence and a dynamic way of computerized decision-making, are driving change for autonomous cars and for the entire automotive and transportation industry, finds a report published by the international professional services company KMPG earlier this year.

The KPMG report projects that by 2030 a new mobility services segment, including products and services related to autonomy, mobility, and connectivity, will be worth over US$1 trillion globally.

Deep learning is a critical enabler of building a self-driving vehicle that can operate without human intervention. Autonomous vehicles must see, think, drive, and learn, much as humans do.

The report titled, “I see. I think. I drive. (I Learn),” forecasts that the direct impacts of deep learning will revolutionize the nature of doing business for automakers.

“Deep learning is accelerating autonomy faster than anyone could’ve imagined, and it has far-reaching implications for the industry and societal mobility as a whole,” said Gary Silberg, KPMG’s national automotive leader. “If a car can’t learn, then it’s still reliant on millions and millions of lines of code, with such complexity and ambiguity, that full autonomy wouldn’t be achievable for many years to come.”

But cars are learning quickly, much more quickly than the people who will eventually use them for transportation.

“Advances in artificial intelligence, machine learning and ultra-low latency cellular are accelerating the development of fully autonomous vehicles,” says the International Telecommunication Union, an agency of the United Nations that coordinates telecommunication operations and services throughout the world.

That concern could be eased by the outcomes of an ITU Workshop on Security Aspects of Intelligent Transport Systems in Geneva on August 28. There, experts will analyze the security demands of the communications technologies underlying connected, automated driving. Participation in the workshop is free of charge and open to all.

ITU standardization work is supporting the increasing integration of ICTs in vehicles with road safety and data security as its top priorities. Security and data protection will factor considerably into the reliability and safety of intelligent transport systems and their success in gaining users’ trust.

Yes, but what do vehicle users and owners actually think about autonomous vehicles?

New research from analysts at London-based IHS Markit on consumer preferences for full autonomy in new vehicles finds the technology is not yet popular among a broad audience.

Yet, the same audience ranked it among the features they would be willing to pay the most for in their next new vehicle purchase.

Responses from more than 5,000 vehicle owners intending to purchase a new vehicle within the next 36 months were reviewed in the survey, representing five key automotive markets – the United States, Canada, China, Germany and the United Kingdom.

Just 44 percent of all respondents indicated that full autonomy would be a desirable feature on their next car, the lowest rank of all of the technologies included in this subsection of the survey.

Yet full autonomy also showed up as the technology that consumers would be most willing to pay for.

Price points varied by country, but German respondents indicated they would be willing to pay $1,016 for full autonomy, nearly 20 percent more than the U.S. respondents, who averaged $780.

Car buyers in China are most likely to choose full autonomy in their next vehicle, with 72 percent of respondents reporting the desire for full autonomy as a feature in their next new vehicle. Many also were interested in related technologies, such as blind spot detection, automatic emergency braking, lane departure warning, highway autopilot and autonomous co-pilot.

“In terms of ADAS safety features like automatic emergency braking and blind spot detection, consumers wanted to see these features standard across the board,” said Colin Bird, senior automotive technology analyst for IHS Markit and co-author of the report.

“There is a large subset of consumers who are willing to pay for full autonomy features demonstrating that consumers see this more as a value-add rather than a necessary safety component, at least for now,” said Bird.

Younger survey respondents were more comfortable with full autonomy than older drivers. Around 61 percent of Millennials and Generation Z respondents across all regions said it was a feature of interest in their next new vehicle.

Older generations are less comfortable with the idea, despite the fact that fully autonomous vehicles could revolutionize mobility for elderly people who can no longer qualify for a driver’s license.

So, while the technology is advancing, much more needs to be done to educate the market and achieve closer integration with other markets such as insurance.

If vehicle insurance rates were based on how often consumers used self-driving features, consumers felt differently about it.

In China, 70 percent of respondents indicated they would be more open to self-driving features. Respondents in Germany were least likely, with just 32 percent reporting it would have an impact for them.

“Among new car intenders, ride-hailing services aren’t used as often as a daily commuting option. Instead, the research found that ride-hailing is used more often for weekend trips, errands, and vacations,” Bird said. “Interestingly, new car intenders are more likely to be drivers for hailing service companies like Uber and DiDi than they are to be passengers. This is particularly the case in the UK, Germany and Canada, which suggests there could be a lucrative sales model in these markets for automakers.”

Based on a study by Navigant Research a list of the top companies working on autonomous cars includes: