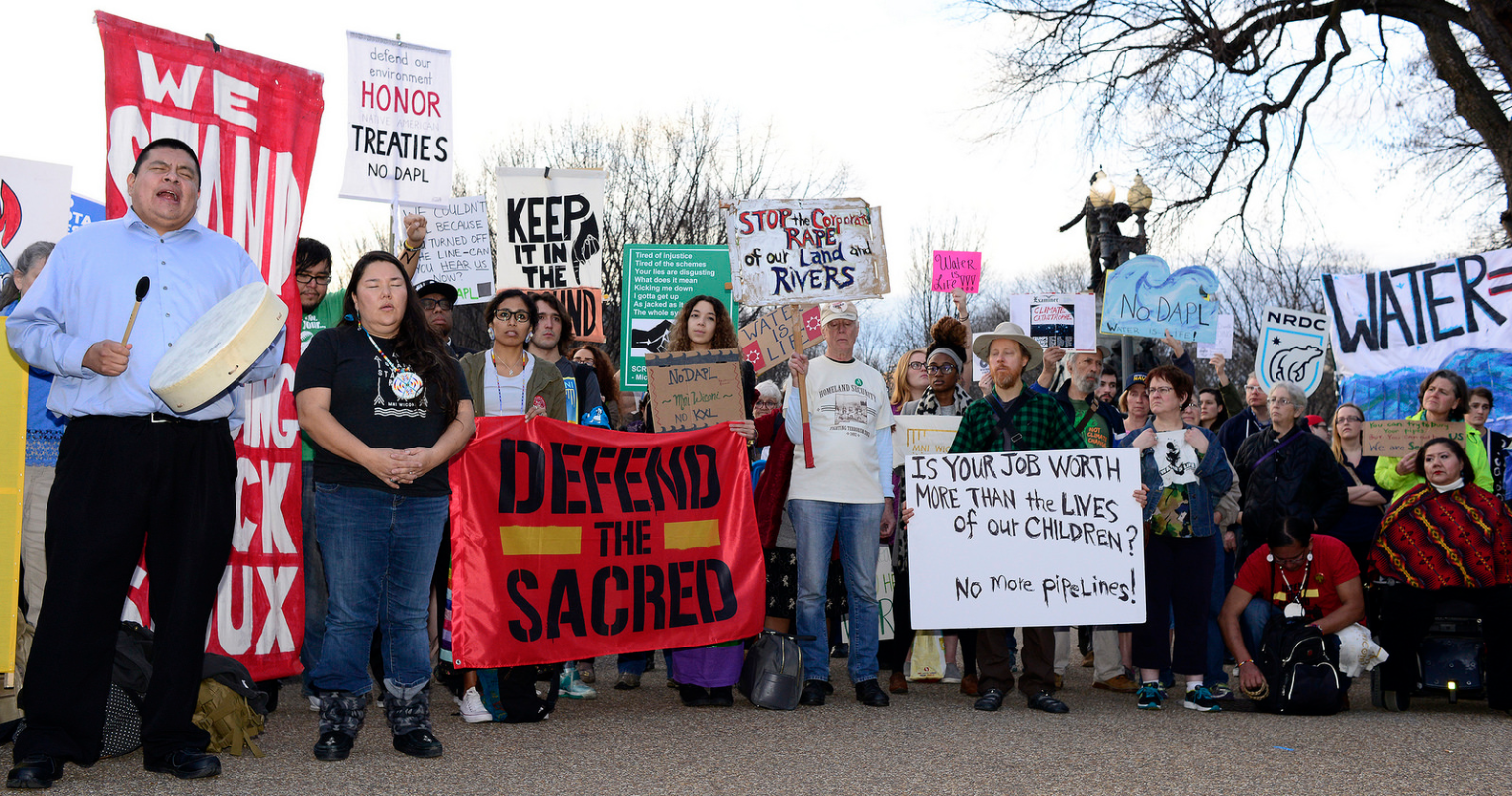 Some 300 environmental justice activists gathered in front of the White House to protest the Army Corps Of Engineers approval of an easement allowing construction of the last leg of the Dakota Access pipeline, February 8, 2017 (Photo by Stephen Melkisethian) Creative Commons license via Flickr

Passage of the measure starts a bidding process aimed at finding a new bank to hold the city’s operating budget, ending an 18 year relationship with Wells Fargo, where total deposits added up to more than $1 trillion last year.

Acknowledging the move is “a drop in a very big bucket,” Seattle Council member Debra Juarez said, “The City must trust the practices and integrity of the institutions that handle our public funds. Council wants to strengthen the City of Seattle’s policies for conducting City business with partners that are committed to fair business practices.“

The Dakota Access Pipeline (DAPL), which is nearly complete except for an easement to cross the Missouri River, would carry up to 570,000 barrels a day of oil fracked from shale 1,170 miles from western North Dakota to pipelines in Illinois.

On Wednesday, the U.S. Army Corps of Engineers granted the easement needed to complete the US$3.8 billion pipeline, terminating the Environmental Impact Statement process ordered by former President Barack Obama.

More court challenges and demonstrations against the project are expected.

Now that the easement has been issued, construction can start at once, but pipeline builder Energy Transfer Partners has not made its schedule public.

During his first week in office, President Donald Trump ordered the Army Corps to move the pipeline forward over months of objections from thousands of protesters from the Standing Rock Sioux tribe, many other tribes and their supporters across the country, including thousands of military veterans.

Camps were established, demonstrations were held and many hundreds of protesters have been arrested, some violently.

Calling themselves water protectors, the protesters fear that the pipeline, to be routed under Lake Oahe half a mile north of sovereign tribal territory, could spring a leak, polluting their drinking water and that of millions of people downstream.

The pipeline was originally routed under the Missouri River north of Bismark, the capital of North Dakota, but the route was changed after the city objected to the risk of an oil spill into the river, source of drinking water for the 67,000 Bismark residents.

Seattle Mayor Ed Murray said Tuesday, “Today’s reversal on the environmental impact statement by the Army Corps is clearly a political decision made with complete disregard for the impacts of the Dakota Access Pipeline on tribal lands and the environment. Setting such a dismissive and careless precedent continues a historic pattern of violating tribal treaty rights.”

“Complete disregard for tribal rights and interests sets a dangerous course not only for the Standing Rock Sioux Tribe, but also has the potential to reverberate throughout Indian Country. This action also shows no respect for the right to clean drinking water for all. We, as allies, must add our voices and put a stop to this injustice.“

“The tribe continues to fight this battle in court and the City of Seattle continues to stand behind them,” said Mayor Murray. “We will not stand by as tribal citizens are treated as second class communities.“

Within the United States, tribes are sovereign nations. The essence of tribal sovereignty is the ability to govern and to protect and enhance the health, safety, and welfare of tribal citizens within tribal territory, explains the National Congress of American Indians (NCAI).

Seattle is not the only U.S. city ready to move its accounts from Wells Fargo because the bank has loaned close to $500 million for the pipeline’s construction.

After the January 11 Santa Fe, New Mexico City Council meeting, Mayor Javier Gonzales signaled with a tweet that his city might abandon its four-year long banking relationship with Wells Fargo because of its part in financing construction of the Dakota Access Pipeline.

Mayor Gonzales tweeted, “Great to hear tonight from so many citizens passionate about #NoDAPL and asking city to find a new bank. I share concerns, will push for broader bidding process this yr, incl. local options. We can/should find better ways to manage funds.“

Now, a San Francisco tech startup devoted to socially responsible investing is making it easier for individuals to divest from companies backing DAPL.

OpenInvest’s chief strategy officer Joshua Levin told CBS San Francisco that his five-month-old company has designed a feature that automatically pulls from an investor’s portfolio companies funding the pipeline, as well as the energy companies that will benefit from it. The portfolio is then automatically rebalanced with new investments.

Wells Fargo is by no means the only bank providing funding to the controversial pipeline.

The 17 banks involved in directly financing the construction of the Dakota Access Pipeline, and the many others providing credits to the companies behind the project, continue to be targeted by campaigners demanding an end to their support for the project.

Activists this week showed up at bank headquarters in New York, Montreal, Munich, Madrid, Amsterdam, San Francisco and elsewhere, demanding the withdrawal of the 17 banks involved in the construction loan to Energy Transfer Partners.

More actions are planned for next week in Washington, DC, and Palo Alto, California. A full list of ongoing #NoDAPL 2017 actions click here

Over 700,000 people have signed one of six petitions demanding that the banks financing the Dakota Access Pipeline withdraw their support of the project. This number includes individuals who collectively report having over US$2.3 billion invested in these banks through checking, mortgage, and credit card accounts, which they are ready to divest if the banks continue financing DAPL. Thousands have already closed their accounts at those banks, removing over US$55 million.

In December, the Standing Rock Sioux Tribe and other Indigenous leaders requested that each of these banks meet with tribal representatives to hear their concerns.

The deadline for banks to respond to the Tribe’s meeting request was January 10. To date, four banks have declined: BayernLB, BNP Paribas, Mizuho Bank, and Suntrust.

Seven banks have met or agreed to meet with the Tribe and its allies: Citi, Crédit Agricole, DNB, ING, Société Générale, TD, and Wells Fargo.

In fact, in November, the largest bank in Norway, DNB, announced that it has sold its assets in the Dakota Access pipeline.

The news follows the delivery of 120,000 signatures gathered by Greenpeace Norway and SumOfUs.org regarding DNB’s investment in the pipeline urging the bank and other financial institutions to pull financing for the project.

DNB recently indicated that it is reconsidering the loan it provided, which amounts to 10 percent of the pipeline’s total funding.

Energy Transfer Partners said Wednesday, “With the receipt of the easement, ETP expects to complete approximately $2.6 billion of committed debt financing and equity transactions within the next several days, including access to the remaining $1.4 billion of the previously announced $2.5 billion project financing for Dakota Access and $1.2 billion from the closing of the previously announced sale by ETP of a minority interest in the Bakken Pipeline to MarEn Bakken Company LLC.“

But the indigenous water protectors and their allies are not prepared to accept this outcome and have pledged to continue their resistance to the pipeline.

Standing Rock Sioux Tribal Chairman Dave Archambault II said, “By attempting to fast track DAPL, President Trump has made it clear that his priorities lie with his wealthy contributors rather than the public interest. Banks now have an opportunity to take a stand against this reckless assault on our treaty rights and water, or be complicit and continue to lose millions.”

Dallas Goldtooth, Keep It In the Ground Campaigner, Indigenous Environmental Network, had this to say. “President Trump wishes to fast-track the construction of the Dakota Access pipeline, against federal law and tribal treaty rights. Indigenous nations and communities will not be the sacrifice zones for President Trump’s fossil fuel regime.“

“We must remind the investors of this pipeline,” said Goldtooth, “that they, via their financing, are threatening the lives of water protectors and it’s time to be held accountable for that.“

From the water protectors’ Sacred Stone Camp Ladonna Bravebull Allard said, “I want the banks to know that the power of their investment comes from the people, and the people are saying we have the right to water, and we will stand for the water. Stop investing in destruction of the Earth.”