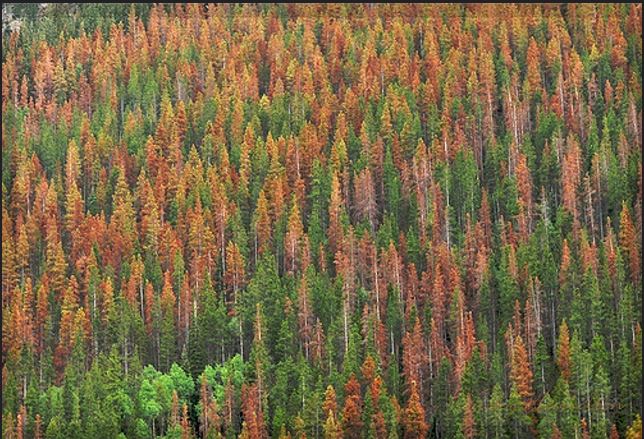 DENVER, Colorado, April 27, 2017 (Maximpact.com News) – As another wildfire season unfolds across the Northern Hemisphere, billions of beetles of many species are burrowing into trees, laying their eggs, killing forests and leaving dead stands vulnerable to fire. And again the debate arises – should they be left alone or managed?

Japan’s world-famous cherry blossoms, which attract millions of tourists every spring, are under attack from a foreign species of beetle that experts fear could kill cherry trees across the nation.

The culprits, red-necked longhorn beetles, Aromia bungii, were imported into Japan in shipments of lumber from China, Vietnam and other parts of southeast Asia, the “Yomiuri Shimbun” newspaper reported in February.

“They have tremendously high fertility,” said scientist Etsuko Kagaya, chief of the planning division in the forest entomology department at the Forestry and Forest Products Research Institute based in Tsukuba, Ibaraki Prefecture. “Unless something is done to prevent their fertility now, there will be irrevocable consequences.”

As a first step, the Environment Ministry of Japan has decided to have the red-necked longhorn beetle designated as an invasive alien species and ban its import or domestic breeding. But hundreds of Japan’s precious cherry trees are already lost.

The European spruce bark beetle, Ips typographus, found from Europe to Asia Minor and some parts of Africa, has destroyed vast areas of Germany’s Bavarian Forest Biosphere Reserve. This destruction in the early aughts, and officials’ decision not to intervene in the natural forest processes, generated local and international alarm.

By 2004, the bark beetles had destroyed close to 4,000 hectares, or nearly one-sixth of the Bavarian Forest Biosphere Reserve. But then the beetle attacks began to recede and destruction slowed.

The biosphere reserve is part of the Bohemian Forest situated on a long mountain ridge running along the Czech-Bavarian and Czech-Austrian borders in central Europe. This densely wooded landscape with mountain streams, marshlands, mires and bog woodlands is a refuge for many endangered species of plants and animals.

Less than six millimeters long, the spruce bark beetle only attacks spruce trees, burrowing through the bark and feeding on the next layer of tissues that transport nutrients and water. There the beetle digs tunnels to lay its eggs.

Just 50 beetles are enough to kill a fully-grown tree in eight weeks. The larvae laid in the tunnels hatch to produce tens of thousands of new beetles to attack neighboring trees.

The only effective way to stop destruction is to fell the tree and remove it from the park. But Bavarian park officials followed a policy of allowing nature to take its course, only felling beetle-damaged trees in the buffer zone between wilderness areas and commercial forests, and to keep the beetles from spreading across the border to the Sumova National Park.

But in 2011 the bark beetles did spread to Sumava. There the same controversy erupted, but this time environmentalists said leave natural processes to take their course, while Sumava Park officials wanted to fell damaged and dead trees.

The majority of Czechs sided with park and government officials, who see the action as a necessary to prevent a wider infestation, a poll by the Center for Analysis and Empirical Studies shows. Some 4,000 trees were marked for cutting.

Bark beetles can spread quickly over large areas. Some scientists say beetles originating on the Iberian Peninsula may have invaded the spruce forests of northern Norway.

In the Norwegian spruce forests beetles are transmitting fungal pathogens such as blue stain fungus, which kills healthy trees by blocking the upward flow of water. It stains the wood with blue streaks, destroying its commercial value, causing trouble for the lumber industry.

North America is also plagued by invasive beetles, both native and from other parts of the world.

In California, a pine tree planted in 2004 in honor of Beatles member George Harrison has died after being attacked by pine bark beetles.

During the five-year drought that parched California until heavy rains this year, pine bark beetles turned the state’s forests into a highly flammable expanse of dead wood.

The most recent data from 2015 estimates bark beetles have killed over 29 million trees, and Cal Fire Education Officer Amy Head said that number is now higher, increasing the fire risk even more.

“Bark beetles are always there,” Head told “SF Gate” last May. “They’re part of the environment in California, but because of the consecutive years of drought, the infestation has reached epidemic levels. We’re going into a fifth year of drought and we didn’t quite get enough rain fall this winter. The bark beetles are multiplying. They’re thriving on these stressed and dying trees.”

In June 2016, the U.S. Forest Service reported that 66 million trees had died since 2010 in California’s prolonged drought.

And beetles are killing vast swaths of forests from Canada to Mexico. They can be found at elevations from sea level to 11,000 feet.

In Colorado, on both the Front Range and Western Slope of the Rocky Mountains, the mountain pine beetle epidemic lingers, warns the U.S. Forest Service.

The spruce beetle infestations exist in the southern forests of the region including the Rio Grande, San Jaun, Grand Mesa, Umcompahgre, and Gunnison National Forests.

Currently, land management agencies are removing hazard trees and fuels to protect forest visitors and surrounding communities from forest fires. The Arapaho and Roosevelt National Forests use both tree removal and spraying to respond to the issue in high value recreation areas such as campgrounds and trailheads and along roads and powerlines.

The core area of the epidemic remains in the Arapaho & Roosevelt, White River, and Medicine Bow-Routt National Forests and adjacent forest lands. Bark beetles affect all of the eight national forests in the Rocky Mountain Region.

Damaged power lines could cause wildfires and/or blackouts because electricity generated in western Colorado must be transmitted across beetle-killed areas to serve Front Range demands. The Forest Service also warns that essential water supplies are at risk because the heart of the epidemic in Colorado and Wyoming contains the headwaters for rivers that supply water to 13 western states.

But as in Europe, not everyone agrees that beetle damaged trees should be managed. Some even contest that they are susceptible to fire.

Scientist Sarah Hart and her colleagues from the University of Colorado who studied the states of the Mountain West said that contrary to the expectation that a mountain pine beetle outbreak increases fire risk, spatial analysis showed no effect of outbreaks on area burned during years of extreme burning across the West.

They concluded, “These results refute the assumption that increased bark beetle activity has increased area burned; therefore, policy discussions should focus on societal adaptation to the effects of the underlying drivers: warmer temperatures and increased drought.”

Scientists under the leadership of Garrett Meigs from College of Forestry at Oregon State University found this year that insects generally reduce the severity of subsequent wildfires because insects decrease the abundance of live vegetation susceptible to wildfire at multiple time lags.

“In such situation, native insects buffer rather than exacerbate fire regime changes expected due to land use and climate change,” they concluded.

Douglas Bevington, forest program director for Environment Now and the author of the 2009 book “The Rebirth of Environmentalism: Grassroots Activism from the Spotted Owl to the Polar Bear,” is of the school of thought that would leave natural processes, including beetle infestations, to take their course.

“Rather than allowing logging proponents to exploit fear and misinformation about fire, we have a collective opportunity to learn from the current pulse of tree mortality and develop a greater understanding of the full diversity of California’s forests,” he wrote in “EcoWatch” last August.

“Dead trees, including large patches of snags, are a vital part of the forest. We should appreciate them, along with the natural processes that create them, such as beetles and wildfires,” wrote Bevington. “While forest protection efforts have historically focused on green trees, forests come in a variety of colors that also deserve protection, including trees with brown needles and trees with blackened bark. Their diversity provides the basis for a diversity of forest life.”