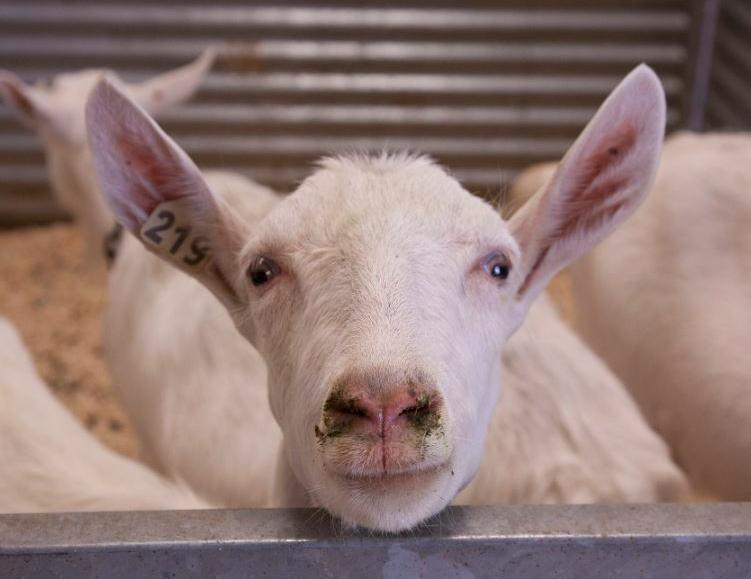 Caption: BioSteel™ Goats have been genetically modified to produce the protein from Golden Orb Weaver Spider (Nephila clavipes) silk in their milk. This means that the gene that codes for protein that spiders use for their silk was transferred through laboratory techniques into the goats’ genome, creating a transgenic organism. (Photo by Center for Post-Natural History)

WASHINGTON, DC, March 23, 2017 (Maximpact.com News) – Human organs-on-chips, implantable biosensors, cowless meat made by culturing animal cells, plastics grown by plants for industrial use, organisms that recycle metals – these are just a few of the genetically engineered products now under development in labs across the United States.

Scientists are creating so many biotechnology products that are expected to come to market over the next five to 10 years, that their number and diversity could “overwhelm the U.S. regulatory system,” warns a new report from the National Academies of Sciences, Engineering, and Medicine.

Engineered animals, plants, insects and microbes designed to live in the environment with little or no human management are likely to be more common, advised the 12-member committee of scientists and attorneys who conducted the study and wrote the report, “Preparing for Future Products of Biotechnology.“

“The rate at which biotechnology products are introduced – and the types of products – are expected to significantly increase in the next five to 10 years, and federal agencies need to prepare for this growth,” said committee chair Richard Murray, a bioengineering professor at the California Institute of Technology.

< Watch a video of Dr. Richard Murray explaining the three main messages of this report here.

During a March 9 webinar announcing the report, Murray said an explosion in new biotech products over the next decade could overwhelm federal regulators.

These federal agencies are headed by the U.S. Environmental Protection Agency (EPA), the Food and Drug Administration and the Department of Agriculture (FDA), the three agencies that sponsored the report.

The U.S. biotechnology economy is growing rapidly, with the scale, scope, and complexity of products increasing. More types of organisms will likely be engineered, the report says, and the kinds of traits introduced with biotechnology will increase.

Animals revived from extinction, landmine-detecting mice, bioluminescent trees to be used as streetlights, ever-blooming plants, and microbes designed for bioremediation are on the horizon, as well as synthetic organisms such as DNA barcodes to track products – the report lists these bioengineered products of the future, and many more, as designed for open release into the environment.

Biotechnology products on the horizon could generate substantial public debate, the report observes. Many members of society have concerns over the safety and ethics of various biotechnologies, while others see prospects for biotechnology addressing social or environmental problems.

The U.S. regulatory system will need to achieve a balance among competing interests, risks, and benefits when considering how to manage development and use of new biotech products, the panel advises.

In addition, more research may be needed to develop methods for governance systems that integrate ethical, cultural, and social implications into risk assessments in ways that are meaningful.

This may not be feasible or even justified for all new biotechnology products – such as products the public is already familiar with or products that will not be released into the environment.

For example, genetically engineered organisms used in the research lab to develop new chemical synthesis methods are not likely to require the same level of public dialogue as products that have more uncertainty associated with them, such as organisms with gene drives, which enhance organisms’ ability to pass certain genetic traits on to their offspring.

Many bioengineered products designed for containment, not open release into the environment, are already on the market. Existing products include:

Wyss Institute researchers at Harvard University, and their collaborators, report that they have engineered microchips that “recapitulate the microarchitecture and functions of living human organs, including the lung, intestine, kidney, skin, bone marrow and blood-brain barrier.“

Each individual organ-on-chip is composed of a clear flexible polymer about the size of a computer memory stick that contains hollow microfluidic channels.

These channels are lined by living human cells interfaced with a human endothelial cell-lined artificial vasculature, the researchers explain.

Mechanical forces can be applied to mimic the physical microenvironment of living organs, including breathing motions in lung and peristalsis-like deformations in the intestine.

Because the microdevices are translucent, they provide a window into the inner workings of human organs, the researchers explain.

Overall, the federal government should develop a strategy that scans the horizon for new biotechnology products, identifying and prioritizing those products that are less familiar or that present a need for more complex risk analysis, the Murray panel recommends in its report.

The federal government should work to establish appropriate federal funding levels for sustained, multiyear research to develop the necessary advances in regulatory science.

“While we are still reviewing today’s budget blueprint, we have initial concerns with the proposed reductions in the budgets for biomedical research, public health, and for agencies that play an important role in promoting innovations in agricultural, environmental, and human health,” said Lisaius.

The day following the election of Trump as President, a survey of leaders in biotechnology in the United States, conducted by “Genetic Engineering and Biotechnology News” showed they thought Trump’s presidency would negatively impact National Institutes of Health research funding and science-technology-engineering-mathematics education.

Over 1,600 professionals, from industry and academia, responded to the survey.

A 46.78 percent plurality said a Trump presidency would spark a “brain drain” as foreign-born researchers educated in American universities would be more likely to leave.

“The biotechnology industry faces the possibility of a brain drain, and this is most alarming,” said Mary Ann Liebert, founder and CEO of the 35 year old publication.

The National Academy of Sciences report says that current staffing levels, expertise, and resources available at the Environmental Protection Agency, the Food and Drug Administration and the Department of Agriculture and other regulatory agencies may not be sufficient to address the expected scope and scale of future biotechnology products.

It is “critical,” the panel said, that the agencies involved in regulation develop and maintain scientific capabilities, tools, and expertise in key evolving areas.

These areas include understanding relationships between intended genetic changes and an organism’s observable traits, the unintended effects of genetic changes on target and non-target organisms, predicting and monitoring ecosystem responses, and quantifying the economic and social costs and benefits of biotechnologies.

In addition to adequate funding for the regulatory agencies, there is the issue of their legal authority to regulate biotech products.

Even when existing laws do allow agencies to regulate these products, the current statutes may not equip them with the tools to do so effectively, the panel warned.

The statutes may not empower regulators to require product sponsors to share in the burden of generating information about product safety. The laws may place the burden of proof on regulators to demonstrate that a product is unsafe before they can take action to protect the public.

The report states, “This implies that adequate federal support for research will be crucial to protect consumer and occupational safety and the environment.“

Featured image: This juvenile Hawaiian Bobtail squid demonstrates the symbiosis between Hawaiian bobtail squid, <i> Euprymna scolopes</i>, and the bioluminescent bacterium, <i>Vibrio fischeri</i>. The squid has complex external and internal organs that separate Vibrio fischeri from ocean water and position the bacterium throughout its body. Hawaiian Bobtails are nocturnal, and the bioluminescent bacterium disguise the squids from predators by mimicking the soft glow of starlight. (Photo by Macroscopic Solutions) Creative Commons license via Flickr