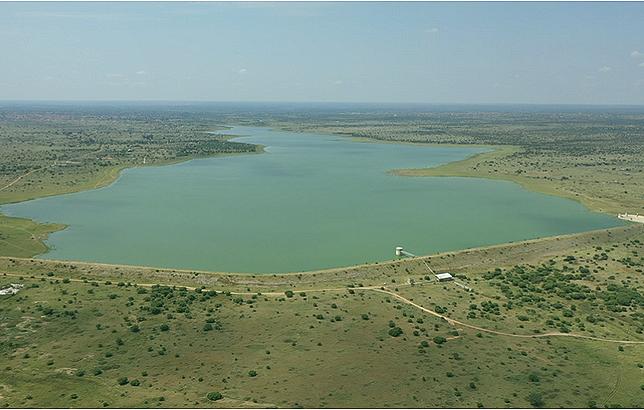 MAHIKENG, South Africa, October 27, 2021 (Maximpact.com News) – A new technology that removes harmful algal blooms from water bodies without damage to other life has succeeded in cleaning up the toxic blue-green algae that for decades has infected the reservoir behind Setumo Dam on South Africa’s Molopo River.

After successful remediation of blue-green algae in waterbodies in Israel the United States and China the new technology has been shown to be safe and effective for waterbodies anywhere.

Though often called algae, these organisms are not true algae at all, but types of bacteria called cyanobacteria. Cyanobacteria are compared to algae because they transform light energy into chemical energy, as algae do. They are among the oldest organisms on Earth with fossil records dating back 3.5 billion years.

The products used to clear the Setumo Reservoir are designed to eliminate cyanobacterial toxic blooms by triggering the cyanobacteria to commit suicide, leaving no trace in the water.

Setumo Dam is a 62-foot-high earth-fill type dam located on the Molopo River near Mmabatho, in South Africa’s North West Province. Established in 1997, the dam serves mainly for water storage and regulation.

But harmful algal blooms have appeared repeatedly over the decades in the Setumo Reservoir as untreated sewage was dumped directly into the water. The heavy cyanobacterial load at the dam prompted officials to class the waterbody as untreatable.

Then in March, the Israel-based company BlueGreen Water Technologies Ltd. introduced its proprietary integrated suite of technologies to Setumo Dam in collaboration with the Department of Water and Sanitation, Sedibeng Water and Rand Water Analytical Services. 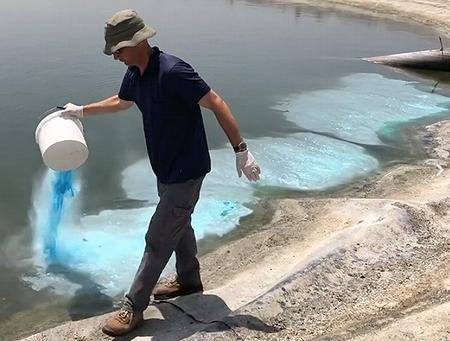 A special treatment protocol was tailored for the unique, extreme conditions in Setumo Dam to reduce the massive toxic algae in the water while eliminating the disturbing taste and odor compounds from the drinking water.

Blue-green algae presents a risk to humans or animals who are directly exposed to it or ingest it. People may have numb lips, tingling fingers and toes, or they may feel dizzy. Symptoms can include skin irritation, flu-like symptoms, and stomach upset. Severe cases could experience seizures, liver failure, respiratory arrest, or even, in rare cases, death.

In dogs, the neurotoxins can cause weakness, staggering, difficulty breathing, convulsions, and death.

Cyanobacteria Can Be Made to Commit Suicide

BlueGreen Water Technologies’ patented formulations, Lake Guard™️ Blue and the Lake Guard™️ Oxy, float on the surface of an infected water body to trigger a “suicide response” within the toxic algal species.

The products trigger the cyanobacteria’s natural suicide response described in scientific detail in a March 2021 study by an international scientific team published in the journal “Frontiers in Microbiology.” https://www.frontiersin.org/articles/10.3389/fmicb.2021.631654/full>

When these products are applied to the infected waterbody, the harmful algal bloom dissipates in hours, without harming the aquatic ecosystem’s plants or animals. More beneficial species can then begin to grow in the ecological vacuum created by the blue green algae suicides.

Both the BlueGreen products are approved by the U.S. Environmental Protection Agency and meet the National Sanitation Foundation NSF/ANSI/CAN 60 standard for drinking water, the American National Standard for evaluation of water treatment chemicals required in most U.S. states and Canadian provinces.

Eyal Harel, CEO and co-founder of BlueGreen Water Technologies, says his company is committed to making drinking water safe. “We undertook this project pro-bono, due to its huge impact on the local community,” he said.

“Setumo Dam is the beating heart of the province,” declared Harel. “Having eliminated the toxic algae in the water facilitated both safe drinking water for the community as well as created the opportunity for Mahikeng to unleash the Dam’s full potential for recreational and religious purposes.”

Now that it is free of the harmful cyanobacteria, local authorities are planning to utilize the dam’s potential as a recreational attraction.

“Setumo Dam’s water quality was far below the levels deemed safe and approved by the World Health Organization and the South African Bureau of Standards (SANS 241),” said Jurgens van Loggerenberg, director of Africa for BlueGreen Water Technologies Ltd. “This project has positively impacted more than half a million lives as a direct result of BlueGreen’s intervention.”

There are over 6,000 known species of cyanobacteria; some species of this bacterial family are found in almost every environment on the planet.

Some Tips for Staying Safe:

“Burning fossil fuels, deforestation, and land development are increasing the amount of carbon dioxide in the atmosphere. This fuels harmful algal blooms because cyanobacteria can feed on the carbon dioxide not only present at the surface of a water body but also dissolved in the water. And when algae die and sink to the bottom of a freshwater body, they decompose and release carbon that was once sequestered, providing more fuel for cyanobacteria growth,” Melissa Denchak and Melanie Sturm of NRDC wrote in August 2019.

Now, for the first time, there is a workable solution to cyanobacterial contamination. BlueGreen Water Technologies is now developing new monitoring capabilities designed to support local communities in identifying and treating early stages of algal blooms so they can avoid the complications of full-blown blooms.

BlueGreen Water Technologies has brought several awards home to Jerusalem this year – Best Global WaterTech Company 2021 from Corporate Vision, and the Breakthrough Technology Company of the Year 2021 by the publisher Global Water Intelligence.