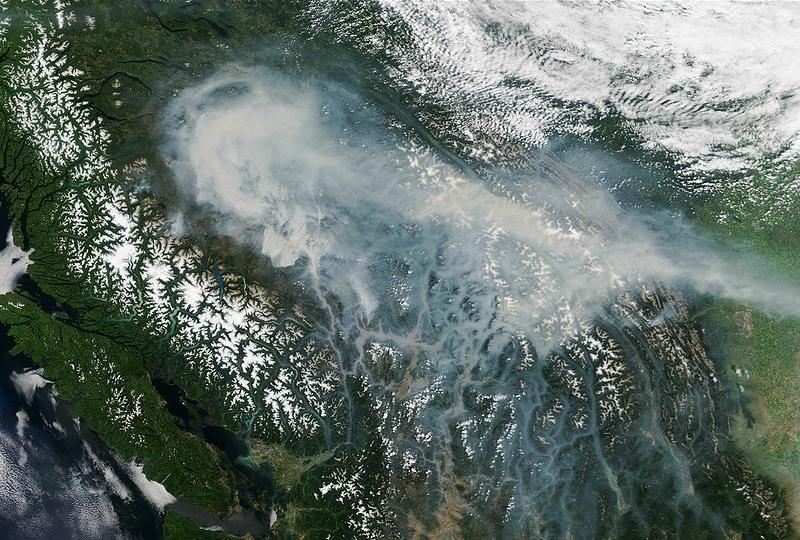 Commissioner for Humanitarian Aid and Crisis Management Christos Stylianides said, “The EU stands in full solidarity with France. In an immediate response, the European Commission has helped mobilize a Canadair aircraft from Italy through our Civil Protection Mechanism.”

“Earlier this month, France helped Italy fighting forest fires and now Italy is showing its support to France. This is EU solidarity at its best,” said Stylianides. “Our thoughts are with all those affected and the brave first responders working in difficult conditions.”

Conditions are difficult around the world, with fires, floods and drought coming in waves of trouble.

June 2017 extended the spell of “exceptional global warmth” that has lasted since mid-2015. Average surface air temperatures were the second hottest on record, after June 2016, finds the latest analysis from the European Union’s Copernicus Climate Change Service.

In addition to high temperatures, extreme weather affected many parts of the world in June and July.

Rescue services and troops in New Zealand’s South Island worked around the clock over the weekend to help those affected by a severe storm that released floods and forced the evacuation of hundreds of homes.

A state of emergency was declared in the South Island cities of Christchurch, Otago, Timaru and Dunedin after some areas were hit with more than 200 millimetres of rain in 24 hours.

The New Zealand Meteorological Service says all of July has been marked by severe weather events, caused by low pressure systems from the Tasman Sea.

Australia had the second driest June on record, with rainfall 62 percent below average for Australia as a whole, according to the Bureau of Meteorology. June was the driest on record for large areas of southern Australia because of persistent high pressure and a lack of cold fronts.

Chinese weather authorities report that the annual monsoon season was accompanied by torrential rainfall in many parts of China for extended periods in June and early July, causing considerable economic losses and transport disruption.

For instance, more than 600 flights were cancelled at Beijing airport alone on July 6 as a result of rainfall.

The rainfall was one of the contributing factors to a deadly landslide with many casualties on June 24 in  Maoxian County, Sichuan. In north and northeast China, the National Meteorological Center said that from June 21 to June 24, the maximum hourly rainfall was between 20-40 mm.

Authorities issued warnings about water levels along key tributaries of the Yangtzee River basin. There was a red alert on July 2 along the whole course of the Xiangjiang River that was near or above record levels. The water level in the section of the river in Changsha, capital of Hunan, reached a record 39.21 meters on July 2.

Since June 22, floodwaters have inundated parts of several cities in Hunan, forcing more than 311,000 people to evacuate, damaging crops and destroying more than 6,300 houses, according to the China Meteorological Administration.

In Japan, tropical storm Nanmadol brought torrential rainfall to the southern part of the country. The city of Hamada in Shimane, which faces the Sea of Japan, saw hourly precipitation of over 80 mm on July 6, according to the Japan Meteorological Agency. Local governments issued evacuation orders to nearly 60,000 residents in affected areas.

In Myanmar, heavy monsoon rains have prevailed across the southeast Asian country since early July. Today, riverbank erosion washed away a Buddhist pagoda. Rising floodwaters across large parts of the country have claimed two lives, washed away entire villages and displaced tens of thousands of residents.

In Indonesia, drought is drying the crops as they stand in the fields.

Much of South America and Africa were warmer than average during this two month period, according to the Copernicus Climate Change Service.

The World Meteorological Organization (WMO) reports the Middle East is broiling. The Iranian city of Ahwaz recorded a temperature of 53.7°Celsius (128.66° Fahrenheit) on June 29 as part of a heatwave with temperatures in excess of 50°C across the region, including Iraq and Kuwait.

An even higher temperature of about 54°C (129.2°F) scorched the city of Turbat, southwestern Pakistan, in late May.

But this week in Turkey, it’s too much water, not too much heat. Istanbul traffic came to a standstill as severe storms inundated the city, flooding the streets.

Temperatures were much above average, and high in absolute terms, over Morocco and northern Algeria in June and July. Forest fires are burning across northern Algeria. An estimated 1,000 hectares have been consumed.

Southern and central Europe was very much warmer than the 1981-2010 average in June, especially over the Iberian Peninsula, where Portugal experienced devastating wildfires.

The heatwave shifted from the Iberian Peninsula to southeastern Europe, the Balkans and the Mediterranean towards the end of June, with temperatures well over 40°C ((104°F) in many countries. The high temperatures were sometimes accompanied by damaging summer storms, hailstorms, torrential rainfall and flash floods.

Fires this month in Croatia and Montenegro sparked requests for help in fighting the flames. Still, on July 18, the Adriatic coast was engulfed in wildfires.

The Deutscher Wetterdienst said July 7, “A period with significantly above-normal temperatures and heat waves, at least for the next week, is expected for most parts of the eastern Mediterranean – from Italy, Balkans to Caucasus and Middle East.”

Conversely, says the WMO, temperatures have been well below average over the northeast of Europe. The contrast between southwest and northeast continues a pattern that was present in April and May.

In Russia, June 2017 was widely called Junabre, meaning June plus November, because of the cold weather in the European parts of the country. June was the coldest month in the past 14 years for Moscow. 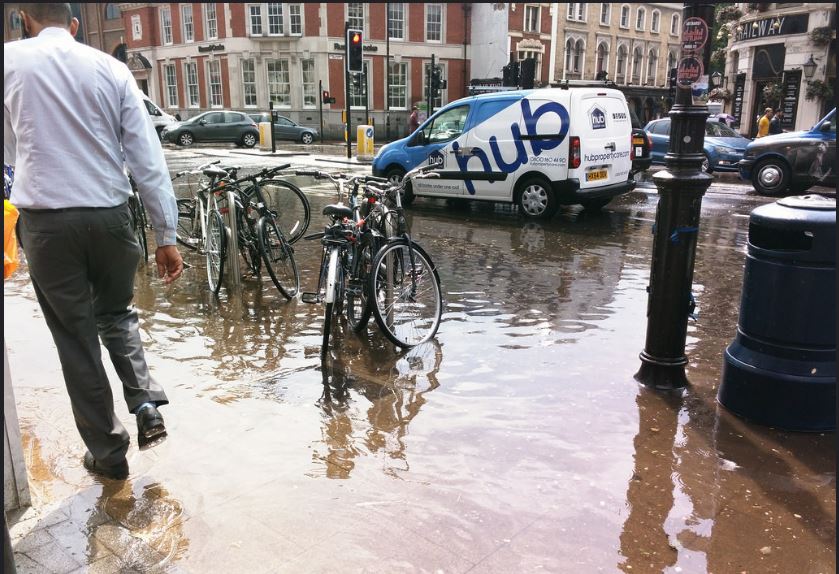 The UK should be bracing for record rainfall, says Bob Ward, policy and communications director at the Grantham Research Institute on Climate Change and the Environment at the London School of Economics and Political Science.

The UK’s two wettest winters on record occurred in 2013-14 and 2015-16, leading to flooding in many parts of the country. As a result, the National Flood Resilience Review was begun, but it needs expansion to include surface water flooding, says Ward.

Commenting on the publication Monday of the paper, High risk of unprecedented UK rainfall in the current climate in the journal “Nature Communications,” Ward said, “I hope that the Environment Secretary, Michael Gove, will carefully read this important Met Office analysis because it highlights the risk of extreme rainfall that could cause flooding.”

“We know that the risk of record rainfall is increasing due to climate change. From 2000 onwards, the UK has experienced 6 of the 7 wettest years since records began in 1910, and its 8 warmest years. The period between January and June 2017 was the third warmest such period on record. As the atmosphere warms, it can hold more water, increasing the risk of heavy rainfall.”

The U.S. National Oceanic and Atmospheric Administration said that starting around June 18 and continuing for over a week, scorching temperatures hit the western United States of America from Arizona to the Pacific Northwest.

Forest fires have been devouring forests across the U.S. West.

For instance, the Detwiler Fire in California began on July 15. It covers 79,400 acres and is 65 percent contained.

The Snowstorm Fire in Nevada began on July 13. It has burned 60,000 acres and is just 13 percent contained.

In Arizona, from June 17-27, Phoenix International Airport has had 11 straight days with temperatures of at least 110°F (43°C), with one day hitting 48.3°C (119°F). The heat caused multiple canceled flights. The hotter the air, the less dense it is, which means less lift for airplanes as they take off. In order to take off, the planes would have needed a longer runway, which is not available in Phoenix.

In July, the forests of south-central British Columbia were primed to burn. Abnormally hot, dry weather had dried out vegetation and soil, and many forests were full of dead trees left by mountain pine beetles. When lightning storms passed over the region on July 7, more than 100 fires were sparked. Some of these fires are still raging.

As of July 19, 2017, the British Columbia Wildfire Service reported 50 wildfires burning in the Cariboo region and another 21 in the Kamloops region. The fires have charred roughly 300,000 hectares (1,000 square miles) and have forced nearly 50,000 people to flee their homes.

So, investors can no longer count on business as usual. The climate is changing – tending toward extremes of heat, cold, drought and rainfall, and the physical impacts of climate change will affect assets and investments.

Climate change and extreme weather events will affect agriculture and food supply, infrastructure, precipitation and the water supply in ways that are only partly understood.

Yet, decisions made by private sector investors and financial institutions will have a major influence on how society responds to climate change.

There will be significant demand for capital, with governments looking to the private sector to provide much of it.