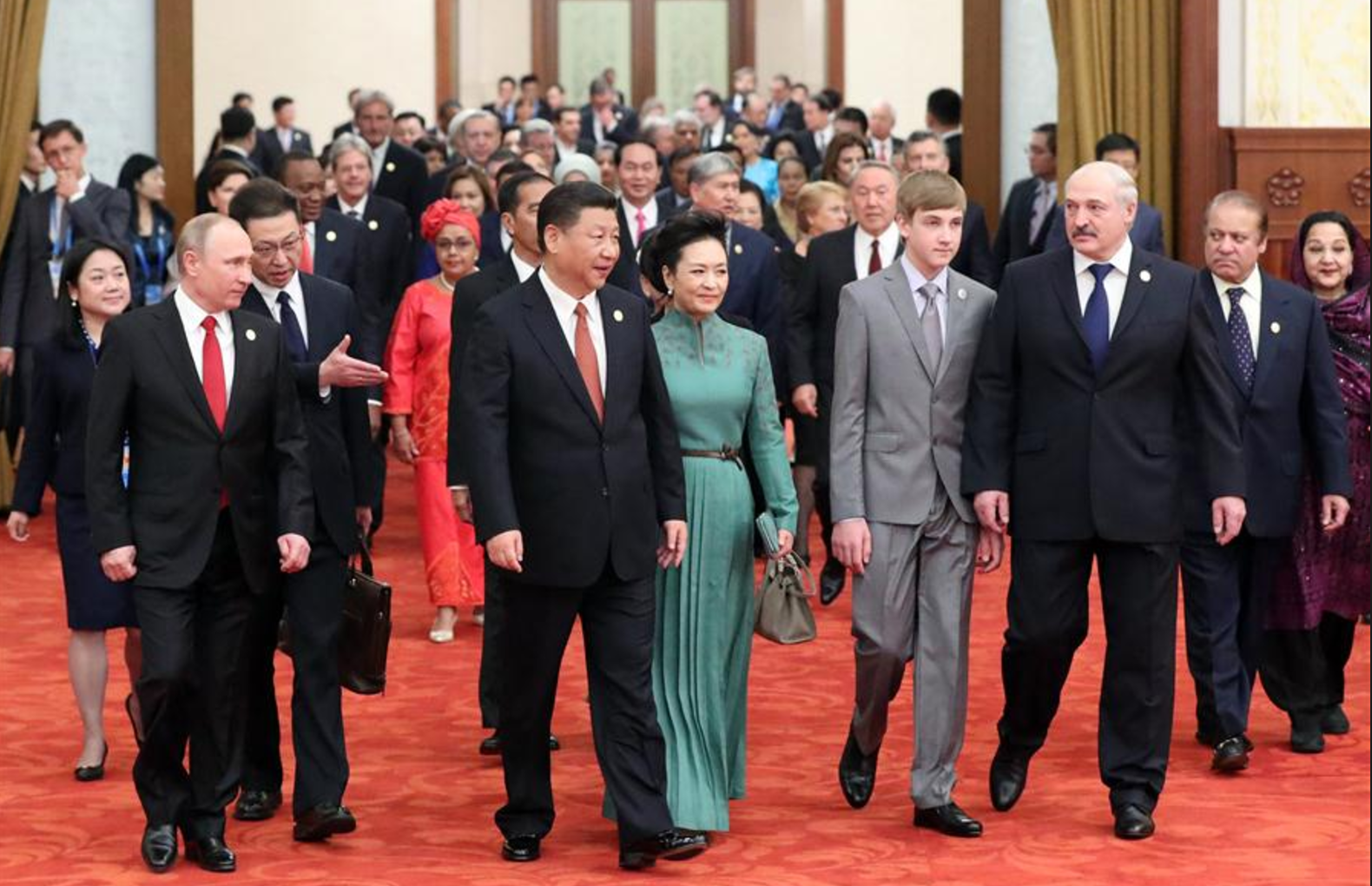 “About 2,000 years ago, our ancestors cherished the hope of friendly communications. They built the ancient Silk Road and started a period of grand exchanges in the history of mankind,” Xi said, toasting the Belt and Road Forum for International Cooperation.

Linking China with 64 countries that collectively account for 62 percent of the world’s population and 30 percent of global GDP, the One Belt, One Road project is long on ambition, and on funding.

Chinese state media calculate that roughly US$1 trillion has already been invested in the initiative, with another several trillion due to be invested over the next decade.

During his keynote speech, Xi pledged at least $113 billion in further funding for the initiative he first announced in 2013. The Chinese leader urged countries across the globe to join hands with him in pursuit of globalization.

“We have no intention to form a small group detrimental to stability,” Xi said. “What we hope to create is a big family of harmonious co-existence.”

Nearly 70 countries and international organizations have signed up to participate, said Xi at the close of the two-day summit on Monday.

Addressing the delegates, UN Secretary-General António Guterres of Portugal drew comparisons between China’s One Belt, One Road initiative and the UN’s Sustainable Development Goals, saying both are rooted in a shared vision for global development.

“Both strive to create opportunities, global public goods and win-win cooperation. And both aim to deepen ‘connectivity’ across countries and regions: connectivity in infrastructure, trade, finance, policies and, perhaps most important of all, among peoples,” said the secretary-general.

The One Belt, One Road initiative includes nearly $1 trillion worth of infrastructure investments in Africa, Asia and Europe, including bridges, nuclear plants and railways.

Guterres stressed the need to work together to uphold international environmental and social standards, ensuring that rural areas, not just cities, benefit.

“With the initiative expected to generate vast investments in infrastructure, let us seize the moment to help countries make the transition to clean-energy, low-carbon pathways – instead of locking in unsustainable practices for decades to come,” Guterres said, praising Chinese leadership on climate change.

The Joint Communiqué issued by world leaders at the conclusion of the forum Monday supports environmental values.

It states, “We are determined to prevent the degradation of the planet, including immediate action on climate change issues, to encourage the full implementation of agreements by all the parties to the Paris Agreement; to manage natural resources in an equitable and sustainable manner, to protect and sustainably use the oceans, freshwater, forests, mountains and drylands; the conservation of biodiversity, ecosystems and wildlife, combating desertification and land degradation, and achieving economic, social and environmental integration, balanced and sustainable development.”

But there are worries that the Belt and Road is really a vehicle for China’s view of itself as the central hub of the Eurasian continent.

This concern kept India from sending an official representative to the forum. The United States announced at the last minute that it would send a government delegation.

In his keynote speech Xi tried to calm these fears, saying, “We are ready to share practices of development with other countries, but we have no intention to interfere in other countries’ internal affairs, export our own social system and model of development, or impose our own will on others. In pursuing the Belt and Road Initiative, we will not resort to outdated geopolitical maneuvering. What we hope to achieve is a new model of win-win cooperation.”

To a volley of international criticism, China included North Korea in the forum, just as Pyongyang fired off its latest missile test.

UN Secretary-General Guterres called on governments to settle peacefully any tensions related to the One Belt, One Road initiative, saying, “Just as the initiative opens new corridors for goods, let us also keep open the channels for dialogue.”

He praised the initiative for its “immense potential” to promote access to markets, and as “far-reaching in geography and ambition.”

Chile’s President Michelle Bachelet was supportive of the One Belt, One Road concept, telling the forum, “Chile welcomes the great effort made by China in the search for new mechanisms for rapprochement, connectivity, innovation and sustainable development.”

“Our presence here today signals our support for this initiative, reaffirming our ties of friendship and cooperation,” said Bachelet. “We are betting on the future, joining in an effort that will lead in the medium and long term to new options for joint work that favors development for all. Chile is a strong promoter of integration. We have defended the idea of convergence in diversity, seeking common interests rather than differences, particularly in the economic arena for mutual benefits.”

World Bank Group President Jim Yong Kim, a Korea-born American citizen, told the forum he was “inspired” by One Belt, One Road.

“The World Bank Group very proudly supports the Government of China’s ambitious, unprecedented effort to light up that night sky. The Belt and Road will improve trade, infrastructure, investment, and people-to-people connectivity – not just across borders, but on a trans-continental scale,” said Kim.

He explained that projects would require innovative financing mechanisms, “a mix of public and concessional finance and commercial capital.”

The World Bank Group has ongoing commitments of US$86.8 billion in numerous infrastructure, trade, power, and connectivity projects in countries along the Belt and Road route, Kim said.

In transportation alone, the Bank has commitments of US$24 billion, Kim said. “We’re financing projects like Afghanistan’s Trans-Hindukush Road Connectivity, Kazakhstan’s East-West Roads, Pakistan’s Karachi Ports, and Uzbekistan’s Pap-Angren Railway that are already reinforcing connections along the Belt and Road.”

Kim said that at the invitation of China’s Ministry of Finance, the World Bank and other multilateral banks have signed an agreement to support the Belt and Road, declaring, “We’re ready to help make the promise of the Belt and Road Initiative a reality.”

China plans the next One Belt, One Road summit in 2019.