Clean Air, Stable Climate: ‘The Battle of Our Lives’

A student cycles to school wearing a mask to protect him from the smoke from burning peat that blankets the city of Palangka Raya, Central Kalimantan, Indonesia. October 16, 2015 (Photo by Aulia Erlangga / CIFOR) Creative Commons license via Flickr

“Many air pollutants also cause global warming. Black carbon is one such example. Produced by diesel engines, burning trash and dirty cookstoves, it is extremely harmful when inhaled,” said Guterres. “Reducing emissions of such pollutants will not only improve public health, it could alleviate global warming by up to 0.5 degrees Celsius over the next few decades.”

“It is time to act decisively. My message to governments is clear: tax pollution; end fossil fuel subsidies; and stop building new coal plants. We need a green economy not a grey economy,” Secretary-General Guterres declared.

Observed every year on June 5, World Environment Day is the United Nations’ biggest annual event for positive environmental action to encourage worldwide awareness of the need to protect our planet. The event has become a global platform for positive public outreach on the environment in over 100 countries.

This year, China hosted World Environment Day, with official events taking place in the eastern city of Hangzhou; in addition, there were many events and celebrations in more than 100 countries.

Chosen by this year’s host, China, the theme of beating air pollution, invites us all to consider how we can change our everyday lives to reduce the amount of air pollution we produce, curb its contribution to global warming and limit its effects on our own health.

Every five seconds, somebody around the world dies prematurely as a result of breathing polluted air, according to a 2018 report by the World Health Organization (WHO) . Air pollution is responsible for the early deaths of some seven million people every year, around 600,000 of them children, the report shows. WHO estimates that 90 percent of all people on earth breathe polluted air.

“Polluted air is poisoning millions of children and ruining their lives,” says WHO Director-General Tedros Adhanom Ghebreyesus. “Every child should be able to breathe clean air so they can grow and fulfil their full potential.”

As well as claiming seven million lives prematurely every year, Secretary-General Guterres pointed out that many air pollutants cause global warming, which he described as “an existential threat.” 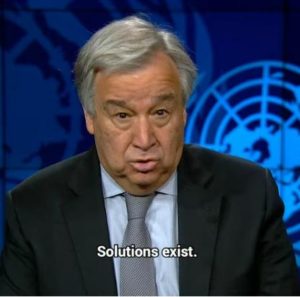 In his video address, Guterres recalled his visit last month to the South Pacific island states, which are suffering from the worst effects of climate change although they have contributed little to what he called “the global climate emergency.”

“The risks are all too real,” said Guterres on May 18 in Port Vila, Vanuatu. “Entire villages are being relocated, livelihoods are being destroyed, people are getting sick from climate-related diseases, and in Tuvalu, I saw an entire country fighting to preserve its very existence.”

“What is remarkable about these countries is that while facing this enormous challenge, they have decided that they are not giving up. They are determined to find solutions and have developed ways to increase their resilience and adaptation,” said Guterres. “Not only that, but they are leading the way in reducing emissions and are an example that the rest of the world should follow.”

“We must understand that the battle against climate change requires the political will for transformational policies in energy, mobility, industry and agriculture,” said thte UN chief. “This is why in the Pacific I have consistently conveyed three urgent messages to world leaders.”

“First, we must shift taxes from salaries to carbon. We need to tax pollution, not people. Second, we must stop subsidizing fossil fuels. Taxpayer money should not be used to boost hurricanes, spread drought and heatwaves, melt glaciers and bleach corals. Third, we must stop building new coal plants by 2020.”

With the environment facing “unprecedented perils,” caused by human activity, the secretary-general declared that action to fight climate change is “the battle of our lives.”

Guterres bases his call to action against air pollution and climate change on a February report by the World Meteorological Organization (WMO) confirming that 2015, 2016, 2017 and 2018 were the four warmest years recorded to date. Monitoring performed by five international organizations, also shows that the global average surface temperature in 2018 was approximately 1° Celsius above the pre-industrial (1850-1900) baseline.

The UN chief called on governments, industry, communities and individuals to explore renewable energy and green technologies and improve the air quality in cities and regions across the world.

An independent UN expert said on Monday that the failure of governments across the world to ensure clear air, constitutes a “violation of the rights to life, health and well-being, as well as the right to live in a healthy environment.” 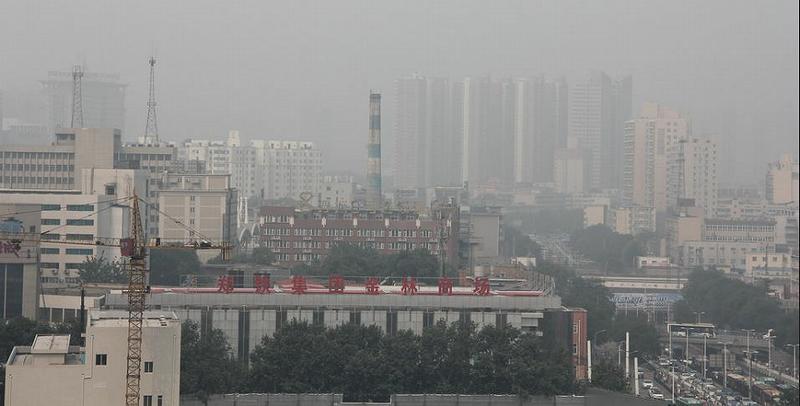 Air pollution in Zhengzhou, the capital of China’s Henan province, a regular on the top ten list of cities in China with the worst air quality. The air in Zhengzhou is filthy with small particulate matter generated from burning coal plus a toxic mix of inorganic gases and volatile organic compounds. Every year in China, hundreds of thousands die prematurely due to breathing polluted air. June 17, 2015 (Photo by V.T. Polywoda) Creative Commons license via Flickr

David Boyd of Canada, the UN’s Special Rapporteur on human rights and the environment and an associate professor of law, policy, and sustainability at the University of British Columbia, called on governments to take urgent action to improve air quality in order to fulfill their human rights obligations.

“The right to a healthy environment is fundamental to human well-being and is legally recognized by over 150 States at the national and regional levels,” said Boyd. “It should be globally reaffirmed to ensure the enjoyment of this right by everyone, everywhere while upholding the human rights principles of universality and non-discrimination.”

“Every hour, 800 people are dying, many after years of suffering, from cancer, respiratory illnesses or heart disease directly caused by breathing polluted air,” Boyd has said, emphasizing that these deaths were preventable.

Boyd described the efforts of China, host of this year’s World Environment Day, to tackle air pollution, as a “success story.” 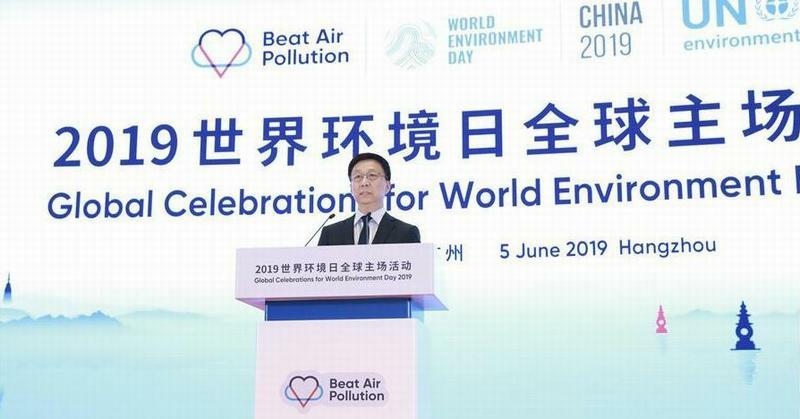 In the Chinese capital, Beijing, a city of 21 million residents plagued with severe air pollution, the airborne concentration of fine particulates – responsible for so many deaths and illnesses – has fallen by a third over the past two decades, beating the target set by the State Council, China’s governing body.

Speaking to UN News ahead of World Environment Day, Tiy Chung, communications officer for the Climate & Clean Air Coalition at the UN Environment Programme (UNEP), said Beijing is “showing the way,” by taking the issue seriously and implementing strong policies. The city, he said, has taken a systematic approach based on good science, and coordinated successfully with surrounding cities and regions.

In a typical early-morning scene this year in Beijing, a soft hum instead of the usual diesel engine roar fills the air as commuters file onto a blue-logo bus, one of the 6,584 electric buses that are now part of Beijing’s public bus network.

Beijing is one of several Chinese cities that has embraced electric mobility. In the past eight years, Shenzhen has become the first city in the world to electrify all of its 16,359 public buses, with Shanghai and Hangzhou taking a similar path.

China has become a leader in electric transit, owning 99 percent of the world’s 385,000 electric buses, a figure that’s expected to swell to 600,000 by 2025. The country is not only leading the global market in electric mobility, but making hefty gains in reducing air pollution and greenhouse gas emissions nationally.

Looking at other cities and countries, Chung said he hopes the world is moving in the right direction. “We are getting at a mix of good policies and technologies. Innovative low-emission technology is at the forefront of a new revolution driven by policies pushing for lower air pollution and de-carbonization of economy.”

In New York, a distinguished panel at the New York Times building invited the audience to consider links between air pollution, environment, health and climate change and to offer practical and actionable solutions to advance New York City’s strategy for a cleaner, healthier future.

Young people at the School for Environmental Studies and Community Wellness in Brooklyn, New York took part in an event called “Love Letters to the Air” during which 100 third grade students creatively expressed their desire to breathe clean air and to address climate action. Their voices are being heard by World Leaders at the Secretary-General’s Climate Summit in September and their views support the movement by school children around the world who are striking for the climate.

In Bangkok, Vienna, Sarajevo and many other cities there were musical performances, activities and panel discussions on air pollution to mark World Environment Day.

Cycling events were popular across the world, particularly in Brazil, Bahrain, and Brussels, Belgium, Runners took to the roads to raise public awareness of the need for clean air in Almaty, Kazakhstan and Geneva, Switzerland. An eco-conscious fashion show

Han read a congratulatory letter from President Xi Jinping and told the crowd that this year’s theme “Beat Air Pollution” manifests people’s aspiration and resolution to improve air quality, according to the state news agency Xinhua.