STANFORD, California, June 29, 2017 (Maxipact.com News) – At this moment, there are more than 20,000 pieces of debris larger than a softball orbiting the Earth, traveling at speeds of 17,500 mph, fast enough to damage a spacecraft. Scientists have now designed a way to grab them based on the way geckos climb walls. 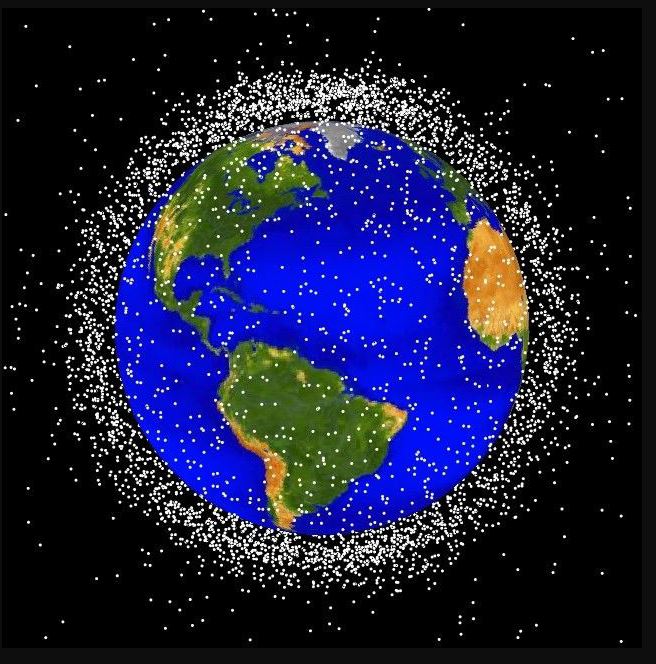 Space junk is a real threat to satellites and even the International Space Station. There are 500,000 pieces of debris the size of a marble or larger and many millions of pieces of debris so small they can’t even be tracked.

NASA has a set of long-standing guidelines used to assess the threat of a close approach of orbital debris to a spacecraft. The question they must answer is: does it warrant evasive action or precautions to ensure the safety of the crew? Several evasive actions have been taken over the past 10 years.

It would be best to clean up the debris, but in space this has presented a major challenge. Suction cups don’t work in a vacuum. Traditional sticky substances cannot withstand the extreme temperature swings. Magnets work only on objects that are magnetic. Other proposed solutions could cause forceful interaction with the debris, and that could push the objects in unintended, unpredictable directions.

But now, researchers from Stanford University and NASA’s Jet Propulsion Laboratory have designed a new kind of robotic gripper to grab and dispose of the debris based on the way small lizards called geckos cling to walls and ceilings.

“What we’ve developed is a gripper that uses gecko-inspired adhesives,” says Mark Cutkosky, professor of mechanical engineering and senior author of the paper published in the June 27 issue of the journal “Science Robotics.”.

“It’s an outgrowth of work we started about 10 years ago on climbing robots that used adhesives inspired by how geckos stick to walls,” he said.

Geckos can climb walls because their feet have microscopic flaps that, when in full contact with a surface, create a Van der Waals force between the feet and the surface.

These are weak intermolecular forces that result from subtle differences in the positions of electrons on the outsides of molecules.

The scientists’ gripper is not as intricate as a gecko’s foot – the flaps of the adhesive are about 40 micrometers across while a gecko’s are much smaller, about 200 nanometers, but the gecko-inspired adhesive works in much the same way as the real gecko functions.

Like a gecko’s foot, the adhesive is only sticky if the flaps are pushed in a specific direction, but making it stick only requires a light push in the right direction.

“If I came in and tried to push a pressure-sensitive adhesive onto a floating object, it would drift away,” said Elliot Hawkes, a visiting assistant professor from the University of California, Santa Barbara and co-author of the paper.

“Instead,” Hawkes said, “I can touch the adhesive pads very gently to a floating object, squeeze the pads toward each other so that they’re locked, and then I’m able to move the object around.”

The pads unlock with the same gentle movement, creating very little force against the object.

The group tested their gripper, in larger and smaller versions, in their lab and in multiple zero gravity experimental spaces, including the International Space Station.

Promising results from those early tests have led the researchers to wonder how their grippers would work outside the station, a likely next step.

The gripper the researchers created has a grid of adhesive squares on the front and arms with thin adhesive strips that can fold out and move toward the middle of the robot from either side, as though it’s offering a hug.

One of the biggest challenges of the work was to make sure the load on the adhesives was evenly distributed, which the researchers achieved by connecting the small squares through a pulley system that also serves to lock and unlock the pads.

Without this system, uneven stress could cause the squares to unstick one by one, until the entire gripper let go.

This load-sharing system also allows the gripper to work on surfaces with defects that prevent some of the squares from sticking.

The group also designed the gripper to switch between a relaxed state and rigid state.

“Imagining that you are trying to grasp a floating object, you want to conform to that object while being as flexible as possible, so that you don’t push that object away,” explained Hao Jiang, a graduate student in the Cutkosky lab and lead author of the paper.

“After grasping, you want your manipulation to be very stiff, very precise, so that you don’t feel delays or slack between your arm and your object,” said Hao.

The group first tested the gripper in the Cutkosky lab. They closely measured how much load the gripper could handle, what happened when different forces and torques were applied and how many times it could be stuck and unstuck.

Through their partnership with JPL, the researchers also tested the gripper in zero gravity environments.

In JPL’s Robodome, they attached small rectangular arms to a large robot with the adhesive, then placed that modified robot on a frictionless floor to simulate maneuvers in a 2D zero gravity environment.

“We had one robot chase the other, catch it and then pull it back toward where we wanted it to go,” said Hawkes. “I think that was definitely an eye-opener, to see how a relatively small patch of our adhesive could pull around a 300 kilogram robot.”

Next, two of the scientists went on a parabolic airplane flight to test the gripper in zero gravity. Over two days, they flew a series of 80 ascents and dives, which created an alternating experience of about 20 seconds of 2G and 20 seconds of zero-G conditions in the cabin.

The gripper successfully grasped and let go of a cube and a large beach ball with a gentle enough touch that the objects barely moved when released.

Then, Parness’s lab developed a small gripper that went up in the International Space Station, where the astronauts tested how well the gripper worked inside the station.

Next steps for the gripper involve getting it ready for testing outside the space station, including creating a version made of longer lasting materials able to hold up to thte high levels of radiation and extreme temperatures of space.

The current prototype is made of laser-cut plywood and includes rubber bands, which would become brittle in space. The researchers will have to make something sturdier for testing outside the Space Station, likely designed to attach to the end of a robot arm.

“There are many missions that would benefit from this, like rendezvous and docking and orbital debris mitigation,” said Aaron Parness, group leader of the Extreme Environment Robotics Group at the Jet Propulsion Laboratory.

“We could also eventually develop a climbing robot assistant that could crawl around on the spacecraft, doing repairs, filming and checking for defects,” said Parness.

The adhesives developed by the Cutkosky lab have already been used in climbing robots and in a system that has enabled humans to climb up walls.

Cutkosky hopes his group can manufacture larger quantities of the adhesive at a lower cost. He imagines that someday gecko-inspired adhesive could be as common as Velcro.

Featured Image: The bottom of a gecko’s foot was the inspiration for a new gripper that could clear space of floating debris. (Photo by Bjørn Christian Tørrissen) Creative Commons license via Flickr