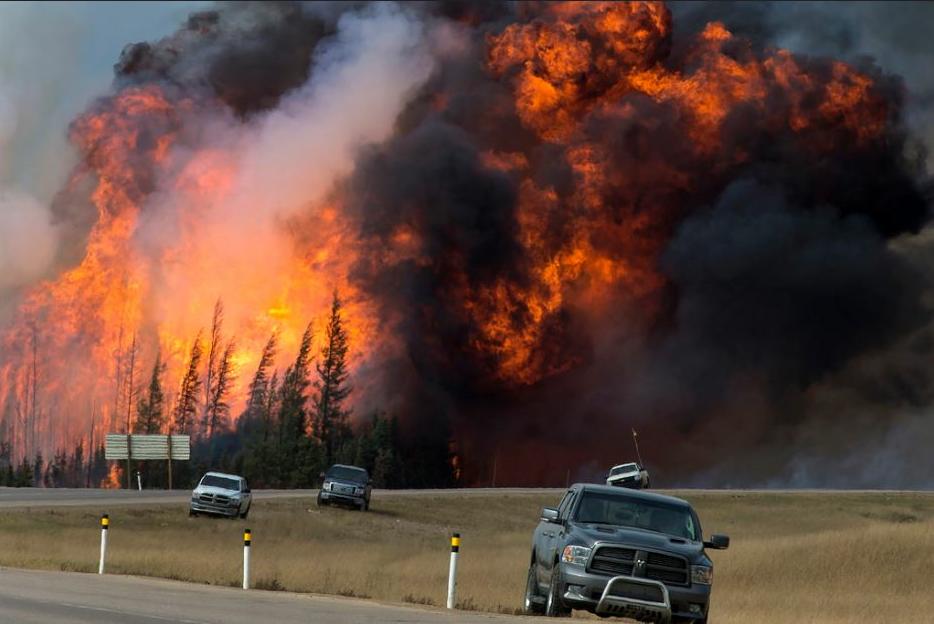 A wildfire devours the forest next to Highway 63, 24 kilometers south of Fort McMurray on Saturday, May 7. The “Beast”, as it was called by Wood Buffalo fire chief Darby Allen, caused the mass evacuation of nearly 90,000 people from the northern Alberta city. (Photo by Chris Schwarz / Government of Alberta) Public domain

MUNICH, Germany, September 21, 2016 (Maximpact.com News) – Monetary losses caused by natural disasters in the first half of 2016 were “significantly higher” than the corresponding figures for the previous year, although fewer people died in these events, according to a report by the German insurance and re-insurance firm Munich Re.

The main loss drivers were powerful earthquakes in Japan and Ecuador, storms in Europe and the United States, and forest fires in Canada.

A raging wildfire consumed the parched forest south of the oil sands city of Fort McMurray, Alberta on May 7. The 1,500 square kilometer inferno caused the evacuation of nearly 90,000 people.

“Scientific studies have shown that heavy rainfall has become more frequent in certain regions of Europe over the last few decades. For example, in the period 1951–2010 severe spring rainfall events that used to have a mathematical occurrence probability of once every 20 years have already increased by a factor of 1.7. Climate change is likely to have been partly responsible for this,” said Höppe.

Natural catastrophe figures for the first half of 2016:

The greatest number of fatalities was caused by an Mw 7.8 earthquake which hit the Pacific coast of Ecuador at almost the same time as the quakes hit Japan. Many buildings were destroyed and shopping mall roofs collapsed. Nearly 700 people were killed. As is so often the case in emerging countries, a relatively small share of the overall loss of US$2.5bn was insured: US$400m.

The highest losses were caused by two earthquakes on the Japanese island of Kyushu in April (US$25bn, just US$6bn was insured).

Munich Re Board member Torsten Jeworrek said, “These events clearly show the importance of loss prevention, such as protection against flash floods or the construction of earthquake-resistant buildings in high-risk areas. The good news is that improved building codes and a more intelligent approach by emergency services and authorities offer people much better protection than used to be the case.”

Catastrophe activity in the United States led to $3.8 billion in insured losses in 29 states during the 2016 first quarter, with much of the damage hitting Texas. Those events were the worst in a decade in terms of frequency and severity, according to a new industry report.

“The first quarter is usually mild … since the major perils are hail and winter storm,” the Property Claims Services unit of Verisk Insurance Solutions explained in its first-quarter 2016 catastrophe review, which encompassed 13 catastrophe events.

But this year, said PCS, some of the first-quarter U.S. storms “packed a serious wallop.” One storm alone caused $1.1 billion in insured losses when it hit Texas in March.

The Global Federation of Insurance Associations (GFIA) , a Brussels-based industry group, warned as far back as 2013 that “loss trends and climate scientists indicate that, in the future, more and more insurance will be needed to help economies recover from a growing frequency of weather related losses: tornados, hailstorms, hurricanes/typhoons.“

Natural disasters triggered by climate change are tragic and costly, but these are not the only losses people are experiencing due to the warming climate.

The rising price – in money and in health – of extreme weather events amid rapid urbanization, and the value of applying science and technology to reduce these risks, is explored in six research papers released at a United Nations forum in Malaysia on July 19.

Assembled by UN University’s Malaysia-based International Institute for Global Health (UNU-IIGH), the research is published in a special issue of the “Asia Pacific Journal of Public Health.”

The jobs most susceptible include the lowest paid – heavy labor and low-skill agricultural and manufacturing.

In Southeast Asia alone as much as 15 to 20 percent of annual work hours may already be lost in low-paid, heat-exposed occupations, a figure that may double by 2030.

Author Tord Kjellstrom of the Health and Environment International Trust, New Zealand, said, “Current climate conditions in tropical and subtropical parts of the world are already so hot during the hot seasons that occupational health effects occur and work capacity for many people is affected.“

The situation in Malaysia is typical of the Southeast Asian countries. As work slows or stops to avoid dangerous heat stress, the country’s Gross Domestic Product is projected to decline by an estimated 5.9 percent (value: US $95 billion) by 2030, more than double the estimated 2.8 percent GDP lost to heat stress in 2010.

In 2030, in both India and China, the GDP losses could total $450 billion, although mitigation may be made possible by a major shift in working hours, among other measures employers will need to take to reduce losses.

This situation already is straining electricity infrastructure, Dr. Kiellstrom observes. The additional energy needed for a single city the size of Bangkok for each 1°C increase of average ambient temperature can be as much as 2000 MW, roughly the output of a major power plant.

“It is very important to develop and apply adaptation measures now to protect people from the disasters that current climate and slowing changing climate brings,” said Kjellstrom. “However, adaptation is only half an answer; we must also take decisive action now to mitigate emissions of greenhouse gases.“

“Failure will cause the frequency and intensity of disasters to worsen dramatically beyond 2050, and the situation at the end of this century will be especially alarming for the world’s poorest people,” he warned.

Climate change will bring increasingly difficult situations, according to the papers:

The authors underline that fast-rising numbers of people are being exposed to the impacts of climate change, with much of the increase occurring in cities in flood-prone coastal areas or on hills susceptible to mudslides or landslides. Especially vulnerable are people living in poverty, including about one billion in slums.

Urban planners, the authors say, can help by designing cities “in ways that enhance health, sustainability, and resilience all at once,” incorporating better building design, facilitating a shift to renewable energy, and fostering the protection and expansion of tree cover, wetlands and other carbon sinks, for example.

The six papers, published by the “Asia Pacific Journal of Public Health,” are: