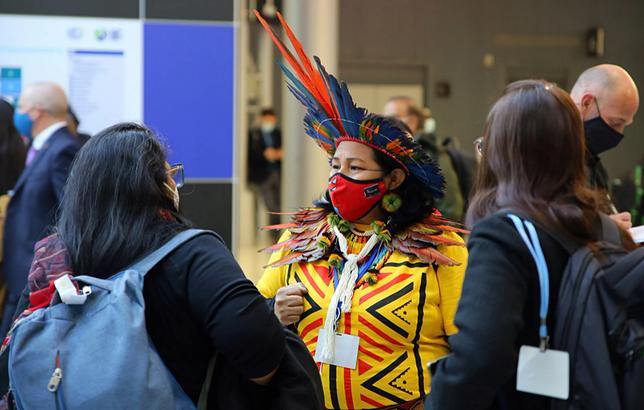 In the corridors and meeting rooms at the UN climate summit COP26, people from across the world network with people they would never have met otherwise, such as this indigenous woman, one of a group from Brazil. November 4, 2021 Glasgow, Scotland (Photo courtesy Earth Negotiations Bulletin) Posted for media use
https://enb.iisd.org/Glasgow-Climate-Change-Conference-COP26-04Nov2021

GLASGOW, Scotland, November 5, 2021 (Maximpact.com News) – The blazing wildfires, parching droughts, fierce storms, and floods of the past decade appear to have convinced the financial universe that climate change is here and must be addressed. Billions upon billions of dollars in climate finance commitments were made in the first three days of the United Nations climate summit COP26 in Glasgow, a big change from past withholding patterns.

COP26 stands for the 26th Conference of the Parties to the United Nations Framework Convention on Climate Change, UNFCCC. The pivotal meeting is being held on the five-year anniversary of the Paris Climate Accord and is considered a test of the agreement. It’s also being held on a planet getting undeniably hotter.

UN Secretary-General António Guterres told the COP26 delegates, “The provisional WMO State of the Global Climate 2021 report draws from the latest scientific evidence to show how our planet is changing before our eyes. From the ocean depths to mountain tops, from melting glaciers to relentless extreme weather events, ecosystems and communities around the globe are being devastated. COP26 must be a turning point for people and planet.”

Wednesday, November 3 began with an announcement by the Glasgow Financial Alliance for Net Zero, GFANZ, that companies representing US$130 trillion in assets have now committed to net-zero carbon emissions by 2050 at the latest.

Mark Carney, a Canadian economist and banker and the UN Special Envoy for Climate Action and Finance, assembled GFANZ, a group of bankers, insurers and investors who have committed to make limiting climate change central to their work.

By phrasing his announcement that way, Carney was responding to Swedish climate activist Greta Thunberg, 18, who criticized the climate talks at the Youth4Climate: Driving Ambition Summit October 8 in Milan, Italy. There, she slammed world leaders. “There is no Planet B, there is no planet Blah, blah blah blah,” Thunberg said.

In Glasgow, at a rally for her own Fridays for Future group outside the COP26 conference venue Monday, Thunberg used even more colorful language, telling the crowd, “We say no more blah blah blah, no more exploitation of people and nature and the planet.”

Carney was undeterred. A former Governor of the Bank of England, he underscored that he sees net zero as the “critical infrastructure of the new financial system.”

As a GFANZ action at COP26, nearly 500 global financial services firms agreed to align US$130 trillion – some 40 percent of the world’s financial assets – with the climate goals set out in the Paris Agreement, particularly limiting global warming to 1.5 degrees Celsius.

These 500 firms have committed to delivering “their fair share of 50 percent emission reductions this decade, and reviewing their targets towards this every five years.” All firms will report their progress and financed emissions annually.

The UK, Norway, Germany, the United States, and the Netherlands, in partnership with 17 funders, opened COP26 with a pledge to invest US$1.7 billion over five years to help Indigenous and local communities protect the biodiverse tropical forests that are vital to protecting the planet from climate change, biodiversity loss, and pandemic risk.

Prince Charles told COP26 delegates that nations had to “honor” the rights of indigenous people as they were “experienced custodians” of their habitats.

Speaking to members of the Global Alliance of Territorial Communities, representing 24 countries with tropical rainforests, Prince Charles said, “We’ve got to work harder to save your forests, for all our sakes.”

An indigenous Shuar from Ecuador, Tuntiak Katan, representing the Coordination of Indigenous Communities of the Amazon Basin, welcomed the deal, saying that funds should be invested in supporting indigenous communities who are able to manage and protect forests.

In the face of threats and violence, Katan said, “For years we have protected our way of life and that has protected ecosystems and forests. Without us, no money or policy can stop climate change.”

Among the 17 donors are the Ford Foundation, the Rockefeller Foundation, Bloomberg Philanthropies, the Rainforest Trust and the Wyss Foundation.

“This pledge signals our commitment to protecting the world’s tropical forests and those who live in them,” said Lord Goldsmith, UK Minister of State for Pacific and the Environment. “The evidence is overwhelming that Indigenous Peoples and local communities are forests’ most effective guardians, often in the face of acute danger, and so they should be at the heart of nature-based solutions to the climate emergency.”

“By investing in tropical forest communities and expanding their communal rights, we will also tackle poverty, pollution, and pandemics,” Lord Goldsmith said.

A new organization, the Global Energy Alliance for People and Planet, GEAPP, was launched Tuesday at COP26 to accelerate investment in green energy transitions and renewable power in developing and emerging economies across the world.

Over the next decade, the Alliance aims to unlock US$100 billion in public and private capital and tackle three profound human problems simultaneously – reaching one billion people with reliable, renewable energy; avoiding and averting four billion tons of carbon emissions; and creating, enabling, or improving 150 million jobs.

In June, IKEA Foundation and The Rockefeller Foundation jointly committed US$1 billion to fight climate change and energy poverty. The Global Energy Alliance now has an additional $500 million from the Bezos Earth Fund along with $9 billion from international development banks such as the African Development Bank and the International Finance Corporation.

The catalytic grant capital provided by these anchor partners is expected to unlock billions of dollars in investment capital from multilateral and development finance institutions.

Indonesia’s President Joko Widodo commented, “Indonesia is proud to endorse the Global Energy Alliance for People and Planet, which is holding the G20 Presidency in 2022.  The initiative brings together the critical stakeholders that must align and co-create a sustainable path for our nations and for our grandchildren. It is our task to restore the triple happiness envisaged by the Balinese Tri Hita Karana three balances – people with people, people with nature, and people with spiritual harmony.”

As part of the stream of financial pledges and commitments in Glasgow on Tuesday, Amazon founder Jeff Bezos, the world’s second richest person, announced a $2 billion pledge from his Bezos Earth Fund towards restoring nature.

This pledge adds to the $1 billion conservation pledge Bezos announced in September. 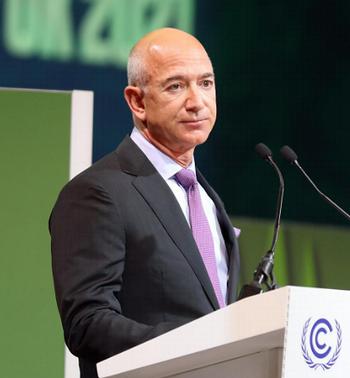 At COP26, Amazon founder Jeff Bezos announces that he will donate at least $2.5 billion in conservation and climate funding in addition to funding pledges he has already made. November 2, 2021 (Photo courtesy Earth Negotiations Bulletin) Posted for media use
https://enb.iisd.org/Glasgow-Climate-Change-Conference-COP26-02Nov2021

From his near-orbital space flight in July, Bezos said he was inspired to protect the environment.

“Looking back at Earth from up there the atmosphere seems so thin, the world so finite and so fragile,” he said. “We must all stand together to protect our world. Climate change gives us a powerful reason to invest in nature.”

“We must conserve what we still have, we must restore what we’ve lost, and we must grow what we need to live without degrading the planet for future generations to come,” Bezos said.

Decarbonizing South Africa With US$8.5 Billion

The governments of South Africa, France, Germany, the United Kingdom and the United States, along with the European Union, Tuesday announced a new ambitious, long-term Just Energy Transition Partnership to support South Africa’s decarbonization efforts. As of 2018, South Africa was the seventh largest producer and consumer of coal in the world.

The partners have pledged to mobilize an initial commitment of US$8.5 billion for the first phase of financing, through grants, concessional loans and investments and risk-sharing instruments, and mobilizing the private sector.

The partnership is expected to prevent up to 1-1.5 gigatonnes of climate-heating emissions over the next 20 years and support South Africa to move away from burning coal for power and accelerate its transition to a low emission, climate resilient economy.