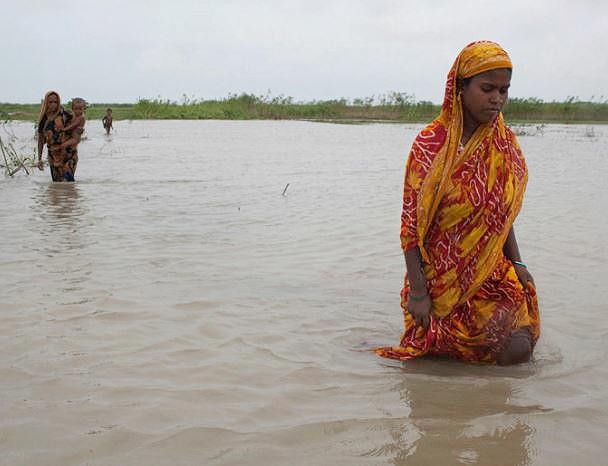 Climate Displacement in Bangladesh: The Jamuna River has swollen from heavier than usual monsoon rainfall causing severe flooding on the islands. Women on Dakkin Patil Bariare are forced to wade across waterlogged land. August 2011 (Photo by Stuart Matthews) Creative Commons license via Flickr

WASHINGTON, DC, August 2, 2018 (Maximpact.com News) – The world’s six largest multilateral development banks (MDBs) increased their climate financing to a seven-year high of $35.2 billion in 2017, up more than 20 percent from the previous year.

The MDBs’ latest joint report on climate financing said $27.9 billion, or 79 percent of the 2017 total, was devoted to climate mitigation projects that aim to reduce harmful emissions and slow down global warming.

The remaining 21 percent or $7.4 billion of financing for emerging and developing nations was invested in climate adaptation projects that help economies deal with the effects of climate change such as torrents of rain, worsening droughts and extreme weather events.

In 2016, climate financing from the multilateral development banks had totaled $27.4 billion.

Climate finance addresses the specific financial flows for climate change mitigation and adaptation activities. These activities contribute to making MDB finance flows consistent with a pathway toward low greenhouse gas emissions and climate-resilient development, in line with the Paris Agreement.

For example, in December 2017, as part of the Global Environmental Facility’s Sustainable Cities Pilot project, the Government of Mexico, assisted by the Inter-American Development Bank as a GEF implementing agency, received a $13.7 million grant for the cities of Xalapa, La Paz and Campeche.

The project will help improve the ability of the three cities to adapt to, and mitigate the effects of climate change. The interventions will benefit more than 600,000 people.

Xalapa will get a biodigester plant to treat the organic component of its solid waste. In La Paz, photovoltaic solar energy plants will be installed to supply seven public buildings and two schools. And in Campeche the project will finance research for a cleanup of the Bay of Campeche, including sewerage and sanitation, storm drainage, recovery of the port area and mangrove conservation.

In October 2017 the Islamic Development Bank joined the MDB climate finance tracking groups and their climate finance figures will be included in reports from 2018 onwards.

Climate funds such as the Climate Investment Funds, the Global Environment Facility Trust Fund, the Global Energy Efficiency and Renewable Energy Fund, the European Union’s funds for Climate Action and others have also played a role in boosting MDB climate finance.

In addition to the $35.2 billion of multilateral development finance, the same adaptation and mitigation projects attracted an additional $51.7 billion from other sources of financing last year.

Of the 2017 total, 81 percent was provided as investment loans. Other types of financial instruments included policy-based lending, grants, guarantees, equity and lines of credit.

The report contains a breakdown of climate finance by country. Latin America, Sub-Saharan Africa and East Asia and the Pacific were the three major developing regions receiving the funds.

Asian Development Bank Vice-President for Knowledge Management and Sustainable Development Bambang Susantono said, “ADB acknowledges the critical role of external funding and has accessed $265 million in concessional financing from the Green Climate Fund to date. It also continues to establish innovative financing facilities, such as the Asia Pacific Climate Finance Fund, which supports financial risk management products that can help unlock financing for climate investments in clean technologies and that build resilience to climate risks.”

The upward trend in MDB climate financing continues this year. The World Bank Group announced July 19 that in fiscal year 2018, 32.1 percent of its financing had climate co-benefits. This already exceeds the target set in 2015 that 28 percent of its lending volume would be climate-related by 2020.

This amounted to a record-setting $20.5 billion in climate-related finance delivered in the last fiscal year – the result of an institution-wide effort to mainstream climate considerations into all development projects.

The 28 percent target was a key goal of the World Bank Group’s Climate Change Action Plan , adopted in April 2016, and was designed to support countries to deliver on their national goals under the Paris Agreement on climate change.

“Mobilizing private capital in support of climate action is a core priority for us,” said Keiko Honda, executive vice president and CEO of the World Bank’s Multilateral Investment Guarantee Agency. “From wind and solar projects in Africa to green buildings in fragile and conflict-affected situations, we are committed to minimizing the impact of climate change on the most vulnerable.”

The sharp increase in investment came in response to the ever more pressing challenge of climate change. Calls to galvanize climate finance were at the heart of events such as the One Planet Summit in Paris in December 2017, two years after the historic Paris Agreement was adopted.

“Climate change poses an enormous challenge to development,” states the World Bank’s Climate Change Action Plan. “By 2050, the world will have to feed 9 billion people, extend housing and services to 2 billion new urban residents, and provide universal access to affordable energy, and do so while bringing down global greenhouse gas emissions to a level that make a sustainable future possible.”

“At the same time, floods, droughts, sea-level rise, threats to water and food security and the frequency of natural disasters will intensify, threatening to push 100 million more people into poverty in the next 15 years alone,”

In 2015, the MDBs and the 23 national and regional development banks that belong to the International Development Finance Club agreed on joint principles for tracking climate adaptation and mitigation finance.

The multilateral development banks are currently working on the development of more specific approaches to reporting their activities and how they are aligned with the objectives of the Paris Agreement.

Featured Image: The global heatwave and those to come will cost farmers many billions, if not their lives. July 30, 2018, Mülheim an der Ruhr, Germany (Photo by Ingo Vogelmann) Creative Commons license via Flickr