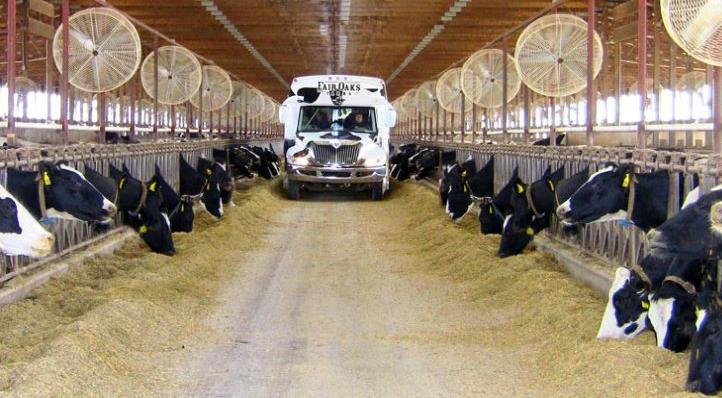 But all that waste is no longer lost. Some U.S. companies and municipalities are now making good use of wet waste materials by converting them into renewable natural gas (RNG), also known as biomethane or upgraded biogas. It’s an emerging strategy to slash greenhouse gas emissions by turning wet organic waste into a low-carbon vehicle fuel.

In a new working paper “The Production and Use of Renewable Natural Gas as a Climate Strategy in the United States,”, Rebecca Gasper and Tim Searchinger of the World Resources Institute (WRI) find that RNG has the potential to be an effective greenhouse gas reduction strategy when it meets two conditions: 1) it is produced from waste, and 2) its use reduces methane emissions to the atmosphere.

“The United States generates millions of tons of food scraps; inedible fats, oils and greases; sewage and manure. Some of this organic waste is used for energy or fertilizer, but most of it – around 50 million tons a year – is sent to landfills, incinerated, or otherwise left to decompose,” writes Gasper. “But this trash doesn’t have to be wasted.”

Gasper and Searchinger say that turning certain types of organic waste into renewable natural gas could provide heavy-duty vehicles with a fuel that avoids more greenhouse gas emissions than it creates over its lifecycle.

The most promising RNG projects include food and yard waste diverted from landfills and livestock manure projects on farms that aren’t already capturing methane. Analyses have shown that using RNG from these projects in heavy-duty vehicles can result in net greenhouse gas reductions on a life-cycle basis.

Municipalities, states, and companies considering RNG as a climate strategy will need to determine the net greenhouse gas impacts, costs, and benefits on a case-by-case basis, the authors say.

The WRI working paper, “The Production and Use of Renewable Natural Gas as a Climate Strategy in the United States,” documents that RNG production grew from 1.4 million ethanol-equivalent gallons in 2011 to nearly 190 million in 2016, according to the U.S. Environmental Protection Agency in a 2017 report.

Private companies, particularly waste disposal services and companies that use heavy-duty vehicles for freight, are beginning to add RNG as a domestic, renewable, low-carbon fuel option in their efforts to reduce greenhouse gas (GHG) emissions.

Fair Oaks Farms in Indiana, for instance, found that powering its milk delivery trucks with RNG made from cow manure saves them $2.5 million in fuel costs each year while reducing methane emissions by the carbon dioxide (CO2) equivalent of 24,000 tons.

“Our entire facility runs on cow & pig manure,” the dairy farm says on its website. “We transform our farms’ waste into energy by way of our anaerobic digesters, we reduce our dependency upon natural gas and electricity during the milk and manufacturing process. This year the use of CNG will reduce the amount of diesel that our milk tanker/trailers use by 2 million gallons. Our barns and plants are also powered by this cutting edge ‘poo power.'”

Private companies with large vehicle fleets like UPS are using RNG as one low-carbon fuel option to meet corporate sustainability goals. (For the record, UPS contributed financial support to the production of this WRI working paper, but the authors say UPS did not try to influence their work.)

RNG is part of California’s plan to reduce emissions 40 percent below 2020 levels by 2030.

RNG will typically replace conventional natural gas in existing natural gas trucks or displace diesel fuel when a fleet owner replaces a diesel truck with a natural gas vehicle that runs on RNG, the authors explain.

Here’s how it works.

When wet organic wastes decompose in typical management facilities – food scraps in a landfill or dairy manure in an open lagoon – they produce methane, a greenhouse gas that’s at least 28 times as potent as the most prevalent greenhouse gas, CO2.

When RNG is made from waste that would otherwise lead to methane emissions, it can have a much lower lifecycle carbon footprint than conventional natural gas, diesel and other fuel options.

RNG from food scraps and dairy manure are considered carbon-negative under California’s low-carbon fuel standard, meaning the emissions avoided from RNG production and use completely outweigh the emissions it causes when it’s produced, transported and burned in a vehicle, explains Gasper.

But each facility must be analyzed on a case-by-case basis, the authors caution.

“In cases where biogas produced by wet wastes is collected and flared as part of typical management practices – which is the case at many landfills and wastewater treatment plants – production of RNG may lead to a net increase in methane produced,” they warn.

For example, in 2014, the California Air Resources Board said that its certified wastewater sludge-to-RNG pathway indicated that RNG production at medium-to-large wastewater treatment plants could increase methane emissions by at least 34 percent, because biogas at these facilities would otherwise be flared.

Yet, in these cases, the calculated life-cycle carbon intensities may still be lower than fossil fuels due to the avoided carbon dioxide emissions from flaring, the authors point out.

Capital costs for RNG projects can be high, ranging from hundreds of thousands to tens of millions of dollars depending on the technologies used and the scale of production.

Gasper and Searchinger advise that project developers can limit the capital investments required by locating projects at sites that require relatively less buildout than others. Landfill projects, for instance, require only installation of a collection system to gather biogas that is already being produced from the organic waste disposed of on-site, rather than installation of a digester.

“Much recent research has focused on RNG’s potential benefits, but a detailed analysis of the conditions under which RNG can generate climate benefits and its potential risks is missing

from the discussion,” write Gasper and Searchinger. “This working paper begins to address that gap by providing an analysis of RNG’s potential as an effective and economically viable GHG reduction tool, drawing on and synthesizing relevant literature.”

Municipalities, companies, and states considering RNG as part of their climate strategy can use this WRI working paper as a resource to understand the basics of RNG production from organic waste, the conditions under which it can lead to large net greenhouse gas reductions, its costs and incentives, and critical gaps in data and analysis of the issue.