Controlling The Rising Tide of Plastics 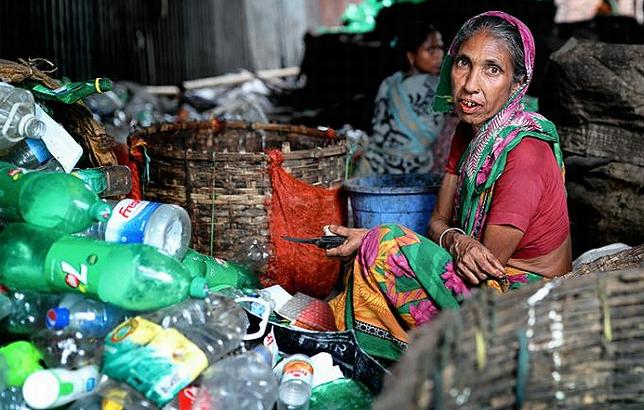 To make her living, Amena Khatun works in a recycle plastic factory in Bangladesh, July 24, 2019 (Photo by UN Women Asia and the Pacific) Creative Commons license via Flickr

Around 300 million metric tonnes of plastic are produced every year, according to the World Wide Fund for Nature (WWF), with much of it ending up in landfills or polluting the oceans in what has become a growing international crisis.

The United States is still coping with the effects of China’s 2018 ban on imports of post-consumer plastic. Some progress is being made, but much work remains to be done.

The Washington, DC-based Association of Plastic Recyclers (APR) Wednesday confirmed its commitment to recycling with a program that encourages retail grocery chains to aggregate and market their behind-the-counter rigid plastics.

“As a processor and seller of recycled HDPE and PP, we are always looking for new sources of recycled plastic supply, and I can attest to the domestic value of these retail grocery plastic materials,” said Brandon Shaw, marketing manager of Indianapolis-based Plastics Recycling Incorporated. “This high-quality raw material is ideal for a variety of next-use rigid product applications, including new containers.”

“The APR estimates that U.S. supermarkets have the potential to generate over 300 million pounds of rigid plastics over the course of a year in behind-the-counter applications, including pharmacy stock bottles, which can double a store’s volumes,” said Kate Eagles, APR program director.

“This is easily recoverable, stackable material, and is typically up to 450 percent more valuable per ton than OCC [scrap paper]. We encourage grocery retailers to take a look at what this program can offer them in terms waste reduction and cost savings, and how it can contribute to meeting corporate sustainability goals.”

The new website and tools are part of renewed effort by APR, with support of the American Chemistry Council, to expand its retail grocery rigid plastics recycling program started in 2013. By 2018, over 4,500 stores were participating in the APR-initiated program, generating an estimated 18 million pounds of recyclable plastics.

The U.S. collection of plastic bottles for recycling rose 52 million pounds, or 1.8 percent, to reach nearly 2.9 billion pounds in 2018.

At the same time, there was little change in the overall recycling rate for plastic bottles, with a slight decline of 0.4 percent from the prior year, according to figures released jointly in December 2019 by the Association of Plastic Recyclers and the American Chemistry Council.

The report shows that the overwhelming majority of plastic bottles collected for recycling was processed domestically, as exports of post consumer plastic bottles declined.

Yet, a 2019 investigation by “The Guardian” newspaper found that hundreds of thousands of tons of waste plastic from the United States are being shipped every year to poorly regulated developing countries for the dirty, labor-intensive process of recycling.

The consequences for public health and the environment are “grim.”

“These failures in the recycling system are adding to a growing sense of crisis around plastic, a wonder material that has enabled everything from toothbrushes to space helmets but is now found in enormous quantities in the oceans and has even been detected in the human digestive system,” the Guardian report states.

In response to grave concerns around plastic waste, in May 2019, the governments of 187 countries agreed to add plastic to the United Nations-supported Basel Convention, which regulates transboundary movements of hazardous wastes and their disposal.

“People don’t know what’s happening to their trash,” Andrew Spicer, who teaches corporate social responsibility at the University of South Carolina and sits on his state’s recycling advisory board, told “The Guardian.”

“They think they’re saving the world. But the international recycling business sees it as a way of making money,” Spicer said. “There have been no global regulations – just a long, dirty market that allows some companies to take advantage of a world without rules.”

While dealing with American waste plastics has turned former agricultural areas in developing countries into stinking dumps, much of the waste plastic generated each year enters the oceans with disastrous effects on marine life.

While it’s tough to say exactly how much plastic is in the ocean, scientists think about eight million metric tonnes of plastic enter the ocean every year. That’s the weight of nearly 90 aircraft carriers, according to the U.S. National Oceanic and Atmospheric Administration (NOAA).

Trillions of pieces of plastic litter float through the ocean, killing fish and other animals. One study found that Americans are swallowing an average of five grams of plastic every week, about the weight of a credit card.

Unlike some other kinds of waste, plastic doesn’t decompose. It can stick around indefinitely, wreaking havoc on marine ecosystems. Some plastics float once they enter the ocean, though not all do. As the plastic is tossed around, much of it breaks into tiny pieces, called microplastics.

Microfibers, shed from synthetic clothing or fishing nets, are a form of microplastic. These fibers, beads, and microplastic fragments can all absorb harmful pollutants like pesticides, dyes, and flame retardants, only to later release them in the ocean.

Scientists have found microplastic particles in rain. They saw it in the rain falling in the Pyrenees in southern France. It has wound up in remote and otherwise pristine islands. 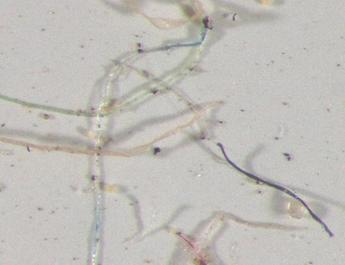 In an August 2019 study, researchers from the United States Geological Survey (USGS) discovered multicolored microplastic shards, beads and fibers in more than 90 percent of rainwater samples taken from across Colorado, including samples from locations more than two miles (3,000 meters) high in Rocky Mountain National Park.

What can we do to stop this incessant plastic pollution?

One brand that is getting on the less-plastic bandwagon is Starbucks, with its 30,000 coffee shops worldwide.

In a public letter January 21 citing the company’s mission “to inspire and nurture the human spirit,” Starbucks chief executive officer Kevin Johnson announced a multi-decade commitment to be a resource-positive company, aspiring to give more than it takes from the planet.

The announcement included science-based preliminary targets for the reduction of carbon emissions, water use and waste by 2030, and outlined strategies the company has identified to move toward them including “shifting from single use to reusable packaging.”

Starbucks will invest in better ways to manage waste, both in Starbucks stores and in its communities, to ensure more reuse, recycling and elimination of food waste, said Johnson, and the company will develop more “eco-friendly stores, operations, manufacturing and delivery.”

There is a new movement among businesses to dump single-use plastics. The New Plastics Economy Global Commitment unites businesses, governments, and other organizations behind a common vision and targets to address plastic waste and pollution at its source.

Signatories include companies representing 20 percent of all plastic packaging produced globally, as well as governments, NGOs, universities, industry associations, investors, and other organisations.

The New Plastics Economy Global Commitment is led by the Ellen MacArthur Foundation, in collaboration with the UN Environment Programme.

Sander Defruyt, lead of the New Plastics Economy initiative at the Ellen MacArthur Foundation, said, “The New Plastics Economy Global Commitment unites businesses, governments and others behind a clear vision for a world where plastic never becomes waste or pollution, and the ambitious targets required to achieve it.”

“Creating this circular economy for plastic will be a challenging journey, but by signing the Global Commitment, Starbucks is joining forces with more than 450 signatories to make it possible,” Defruyt said. “We urge others to join them. By coming together, we can eliminate the plastics we don’t need and innovate, so the plastics we do need can be safely and easily circulated, keeping them in the economy and out of the environment.”