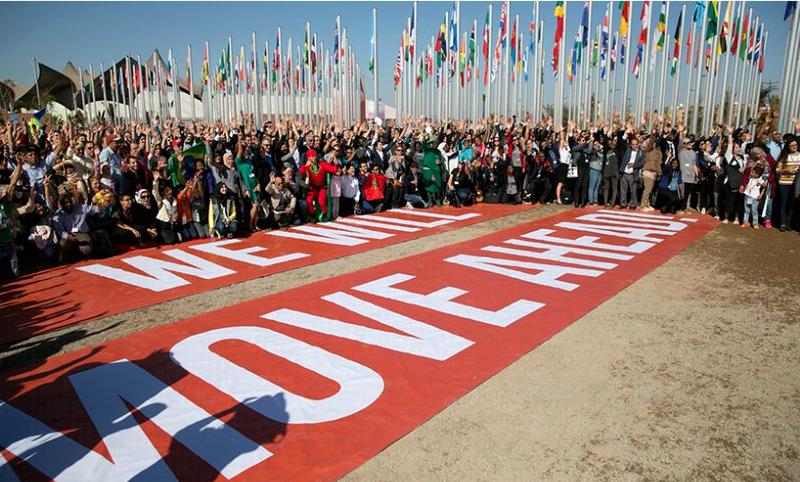 MARRAKECH, Morocco, November 21, 2016 (Maximpact.com News) – In the early hours of Saturday morning in Marrakech, more than 190 governments agreed to the Marrakech Action Proclamation , which sends a strong message of global unity towards taking effective action to limit climate change.

The document proclaims that was issued “to signal a shift towards a new era of implementation and action on climate and sustainable development.“

“Our climate is warming at an alarming and unprecedented rate and we have an urgent duty to respond,” the Proclamation warns.

The 22nd Conference of the Parties to the UN Framework Convention on Climate Change, COP 22, hosted by Morocco’s King Mohammed VI, saw nearly 500 heads of state or government and ministers in attendance.

By the end of the two-week climate summit, more than 100 countries, representing over 75 percent of global greenhouse gas emissions, had formally joined the Paris Agreement on climate.

On November 15, Marrakech hosted CMA 1, the first official Meeting of Parties to the Paris Agreement, its top governing body, following the accord’s early entry into force on November 4, less than a year after it was adopted.

Watch a video of the CMA1 here

Agreed at COP21 last December in Paris, the Agreement sets the goal of keeping the global average temperature rise this century well below 2 degrees Celsius (3.6 degrees Fahrenheit). A further aim is to limit the temperature increase to 1.5 degrees Celsius above pre-industrial levels.

The November 8 election of climate denier Donald Trump as president of the United States sent shock waves through the gathering, but it did not deter delegates from moving forward to tackle climate change with determination.

Patricia Espinosa, executive secretary of the UNFCCC, said, “The landmark Paris Agreement set the course and the destination for global climate action. Here in Marrakesh, governments underlined that this shift is now urgent, irreversible and unstoppable.“

The governments proclaimed their support for the Paris Agreement, which is the first global climate accord that includes

all the large greenhouse gas emitters, whether they are developed or developing countries.

“We welcome the Paris Agreement, adopted under the Convention, its rapid entry into force, with its ambitious goals, its inclusive nature and its reflection of equity and common but differentiated responsibilities and respective capabilities, in the light of different national circumstances, and we affirm our commitment to its full implementation,” the governments proclaimed.

“Indeed, this year, we have seen extraordinary momentum on climate change worldwide,” they proclaimed. “This momentum is irreversible, it is being driven not only by governments, but by science, business and global action of all types at all levels.“

“Our task now is to rapidly build on that momentum, together, moving forward purposefully to reduce greenhouse gas emissions and to foster adaptation efforts,” they stated. “We call for the highest political commitment to combat climate change, as a matter of urgent priority.“

Participants in the ministerial dialogue, titled “A multi-stakeholder approach to mobilization and delivery of adaptation finance.” Nov. 15, 2016 (Photo courtesy Earth Negotiations Bulletin) please link as before.

During the high-level segment of the conference, U.S. Secretary of State John Kerry underlined the commitment of the American people to climate action.

The United States, Canada, Germany and Mexico announced ambitious climate strategies out to 2050, reflecting the long-term goal of the Paris Agreement to achieve climate neutrality and a low-emission world in the second half of this century.

The Kingdom of Morocco announced its Blue Belt Initiative aimed at building the resilience of coastal communities and promoting sustainable fisheries and aquaculture.

The financing to forestall the planet’s rising temperature is beginning to flow – from many different sources.

Multi-billion and multi-million dollar packages of support for clean technologies; building capacity to report on climate action plans; and initiatives for boosting water and food security in developing countries were among the many new initiatives launched in Marrakech.

Countries pledged more than $81 million to the Adaptation Fund, surpassing its target for the year.

Countries pledged over $23 million to the Climate Technology Centre and Network, CTCN, which supports developing countries with climate technology development and transfer.

The Green Climate Fund announced the approval of the first two proposals for the formulation of National Adaptation Plans – Liberia for $2.2 million and Nepal for $2.9 million.

Another 20 countries are expected to have their proposals approved soon with up to $3 million each. Overall, the Green Climate Fund is on track to approve $2.5 billion worth of projects.

During COP 22, governments learned that in 2016 more than 30 projects for cutting emissions with technology transfer objectives were approved by the Global Environment Facility, with $188.7 million in GEF funding and $5.9 billion in co-financing.

A club of subnational governments, the Under2 Coalition, who have committed to reduce their emissions by at least 80 percent by 2020, announced their membership has grown to 165 jurisdictions.

The combined GDP of these 165 member governments is close to $26 trillion – a third of the global economy – and cover a population of around one billion people living in North America, Europe, Latin America, Africa and Asia.

The UN Food and Agriculture Organization, World Bank and the African Development Bank announced the African Package for Climate-Resilient Ocean Economies, an ambitious package of technical and financial assistance to support ocean economies in Africa and build greater resilience to climate change in coastal areas.

All these funds and much more will be needed to avert climate change, said Salaheddine Mezouar, Morocco’s environment minister, who presided over COP22.

“It will be necessary to respect the commitment of $100 billion dollars from now until 2020,” he said, referring to developed countries’ pledge to contribute US$100 billion annually to help developing countries cope with the existing impacts of climate change such as floods, droughts and disease.

“Faced with the magnitude of what is required for dealing with the impacts of climate change, turning billions into trillions is indispensable,” Mezouar said. “2017 must be the year of large-scale projects, of mobilizing finance, and accessing financial facilities that will be necessary for adaptation.“

At the close, Fiji was announced as the incoming President of the 2017 UN climate conference, COP23, which will be hosted by the UNFCCC in Bonn, Germany.

Outgoing UN Secretary-General Ban Ki-moon has attended all of the COP meetings held during his 10 year tenure. He told the COP22 delegates, “I leave you with the strong hope that we will have the courage, tenacity and wisdom to live up to our responsibility to future generations by protecting our only home: this beautiful planet Earth.“