KATOWICE, Poland, December 18, 2018 (Maximpact.com News) – Glaciers are still melting, sea levels are still rising, extreme weather is still causing floods and droughts, but the planet may be better able to withstand these consequences of climate change now that delegates at the UN’s COP24 climate change summit in Poland have adopted implementing guidelines for the 2015 Paris Accord.

The nearly 200 governments gathered in Katowice early Sunday adopted the guidelines that will breathe life into the Paris Agreement, which is aimed at keeping global warming below 2°C compared to pre-industrial levels. 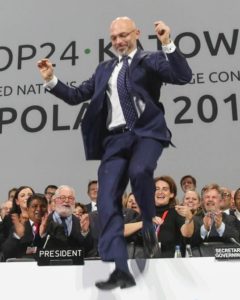 He thanked the hundreds of delegates in the room for their “patience,” noting that the last night “was a long night.” Laughter rippled through the hall as the big screens showed a delegate yawning profoundly.

The meeting had been scheduled to wrap on Friday, December 14. But the conference continued Saturday, as delegates consulted throughout the day to finalize the decisions for the Paris Agreement Work Programme. The final plenary session was gaveled to a close early Sunday morning.

Agreement was not unanimous. The United States, Saudi Arabia, Kuwait and Russia are not onboard with the views of the majority of governments at COP24.

Judith Garber, principal deputy assistant secretary with the U.S. Bureau of Oceans and International Environmental and Scientific Affairs, delivered the U.S. National Statement, saying, “As President Trump announced last year, the United States intends to withdraw from the Paris Agreement, absent the identification of terms that are more favorable to the American people. He also made clear that the United States will continue to be a leader in clean energy, innovation, and emissions reduction.”

But many delegates at COP24 did not believe that the Trump administration’s championship of “clean coal” is the way to avert climate change.

On December 10 in Katowice, as the United States hosted a side event focused on the role of “clean coal,” carbon capture and storage technologies, delegates stormed out of the event and flooded the hallways, calling on the United States to “keep fossil fuels in the ground.”

That action followed a split last week among delegates over the Intergovernmental Panel on Climate Change’s special report on the disastrous consequences if average global temperatures rise by 1.5°Celsius, and how to ensure they don’t go higher.

The IPCC report was widely regarded as a wake-up call for policy makers when it was released in October. Almost all the nearly 200 countries present in Katowice had wanted to “welcome” the IPCC report, making it a benchmark for future action.

But the United States sided with Russia, Saudi Arabia and Kuwait in blocking endorsement of the study, calling for it to be “noted” but not “welcomed.”

“The United States was willing to note the report and express appreciation to the scientists who developed it, but not to welcome it, as that would denote endorsement of the report,” the U.S. State Department said in a statement. “As we have made clear in the IPCC and other bodies, the United States has not endorsed the findings of the report.”

The objections of the four governments to the IPCC report was based on its suggestion that fossil-fuel use must be phased out by 2050 to avoid the worst catastrophes of climate change. Coal, oil and gas are major sources of carbon dioxide, which traps heat in the atmosphere close to the planet.

Blasting the efforts of the United States, Saudi Arabia, Kuwait and Russia to undermine climate science as a “suicide mission” and “criminal enterprise,” California Governor Jerry Brown sent a video message imploring the world’s leaders to “wake up” and “take action now.”

In addition, several other alarming climate studies have been released during the past two months, including the

“Global Carbon Budget 2018” published in this month’s issue of the journal “Earth System Science Data.” In this study, an international team of scientists shows that the concentration of carbon dioxide (CO2) in the atmosphere has increased from roughly 277 parts per million in 1750, the beginning of the industrial era, to 405 ppm in 2017.

“Over the last decade we have seen unprecedented changes in the human and biophysical environments (e.g. changes in the growth of fossil fuel emissions, Earth’s temperatures, and strength of the carbon sinks), which call for frequent assessments of the state of the planet and a growing understanding of and improved capacity to anticipate the evolution of the carbon cycle in the future.”

This means that a continuous stream of accurate data is necessary to allow scientists to understand and governments to have some control over climate warming.

What Is the Paris Agreement Work Programme?

One of the key components of the Katowice agreement approved by delegates is a detailed transparency framework, meant to promote trust among nations. It sets out how countries will provide information about their national climate action plans, including the reduction of greenhouse gas emissions as well as mitigation and adaptation measures.

In Katowice, agreement was reached on how to uniformly count greenhouse gas emissions and that, too, is part of the Paris Agreement Work Programme.

On the difficult question of financing from developed countries in support of climate action in developing countries, the Katowice guidelines set a way to decide on new, more ambitious targets from 2025 onwards, from the current commitment to mobilize US$100 billion a year as of 2020.

Nations also agreed on how to collectively assess the effectiveness of climate action in 2023 and how to monitor and report progress on the development and transfer of technology.

“The guidelines that delegations have been working on day and night are balanced and clearly reflect how responsibilities are distributed amongst the world’s nations,” said Patricia Espinosa, who heads the UN Framework Convention on Climate Change, UNFCCC, secretariat.

“They incorporate the fact that countries have different capabilities and economic and social realities at home, while providing the foundation for ever increasing ambition,” said Espinosa.

There was one key issue upon which delegates could not agree – the matter known as “Article 6,” about carbon markets or carbon trading, which enable countries to buy and sell their emissions allowances to meet a part of their domestic mitigation goals.

The Paris Agreement recognizes the need for global rules on this matter to safeguard the integrity of all countries’ efforts and ensure that each tonne of emissions released into the atmosphere is accounted for.

But agreement was not reached in Katowice, and the issue will be back on the table at the next UN climate change conference, COP25, set to take place next December in Chile.

Commenting on the adoption of the Paris Agreement Work Programme, Chair of the Least Developed Countries Group, Gebru Jember Endalew of Ethiopia, said, “While there are parts of the package that could and should have been stronger, the implementation guidelines adopted today provide a strong basis to start implementing the Agreement. The next step, of course, is for countries to take urgent, ambitious action to fulfil their Paris Agreement commitments.”

“This year, it has been made very clear that no country is immune to the impacts of climate change, but it is the nearly one billion people living in the 47 least developed countries that are often hit the hardest, suffer the most, and have the least capacity to cope,” said Endalew.

“Parties need to revise and enhance their Nationally Determined Contributions before 2020 in line with their fair share,” he said. “It is well known that current pledges will not be nearly enough to limit warming to 1.5°C. To achieve the visions and the goals of the Paris Agreement, countries must commit to greater levels of climate action and support, and follow through on those commitments.”

To achieve this, the UN Secretary-General is convening a Climate Summit on 23 September, at UN Headquarters in New York, to engage governments at the highest levels.

Some financial engagement is already underway. The Green Climate Fund has to date funded 93 climate-calming projects and the Fund’s first replenishment drive received top-level support from both developing and developed nations during COP24.

In October, the Green Climate Fund Board approved over US$1 billion of new projects and programs to support climate action in developing countries.

Another high-dollar project approved in this round is US$100 million for the Indonesia Geothermal Resource Risk Mitigation Project with the World Bank. See the entire list here.

The two-week climate conference began on a positive note for the Green Climate Fund with an announcement by the German Government it will double its pledge to GCF to €1.5 billion. This was followed by Norway’s announcement that it will double its contribution to GCF’s replenishment. Ireland also indicated that it will commit additional financing to the Fund by the end of this year.

Other encouraging financial commitments for climate action were made. The World Bank announced it would increase its commitment to climate action after 2021 to $200 billion; and the Climate Adaptation Fund received a total of $129 million.

The COP24 Presidency announced the Driving Change Together – Katowice Partnership for Electromobility and the associated partnership between Poland and the United Kingdom.

The Driving Change Together Partnership will establish a platform for cities, regional and national governments, as well as nongovernmental organizations to develop and exchange their knowledge and experiences of e-mobility and foster establishing new practical initiatives at local and international levels. 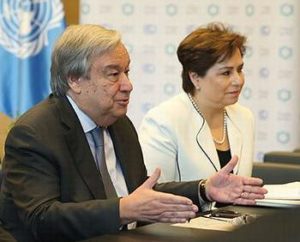 In addition to the political negotiations among UNFCCC Member States on the Paris guidelines over the past two weeks, the halls of COP24 were packed with 28,000 participants exchanging views, sharing innovative ideas, attending cultural events, and building partnerships for cross-sectoral and collaborative efforts.

“Our movement has shown that we’re ready to fill the ambition gap – from the growing wave of kids’ school strikes to the way we’ve blown through a major milestone with over 1,024 divestment commitments” from institutions announced at COP24.

On Thursday in Katowice, a press conference celebrated the divestment commitments spanning 37 countries since 2012: cities like New York, Berlin and Cape Town; medical institutions like the American Public Health Association; faith groups like the Diocese of Assisi; insurance giants and investment funds like Norway’s sovereign wealth fund and the country of Ireland.

“To keep warming below 1.5°C we demand an immediate freeze on all new fossil fuel projects and a rapid and just transition to 100 percent renewable energy for all,” says Fossil Free.

And back in the United States, more than 1,000 young people flooded the halls of Congress to demand action on a Green New Deal before the end of the year, resulting in over 100 arrests. And the call for a Green New Deal has spread to Canada.

A day before the start of COP24, 75,000 people marched in Brussels, Belgium and 35,000 came out in Berlin and Cologne, Germany. On December 8, activists staged a peaceful march in Katowice and took actions to sound the climate alarm around France and Europe.

The Paris Agreement, unanimously agreed by world leaders in 2015, has already produced positive results. According to the United Nations, notable achievements include:

The commitments contained in it are:

– Limit global average temperature rise to well below 2°C and pursue efforts to limit the temperature increase to 1.5°C.

– Ramp up financing for climate action, including the annual $100 billion goal from donor nations for lower-income countries.

– Develop national climate plans by 2020, including their self-determined goals and targets.

– Finalize a work program to implement the agreement in 2018.

That last point, the Paris Agreement Work Programme, was indeed finalized by delegates at COP24 in Katowice, despite some disagreements.

Chile will host the next UN climate summit, working with Costa Rica and other Latin American nations.

Brazil withdrew its candidacy to host the COP25 conference citing budget limitations, but environmental groups believe the move is a favor to the incoming government led by the far-right Jair Bolsonaro, who has threatened to pull Brazil out of the Paris Agreement.

The next summit was expected to take place between November 11 and 22, 2019, but Chilean President Sebastian Piñera now says COP25 will be held in January 2020. 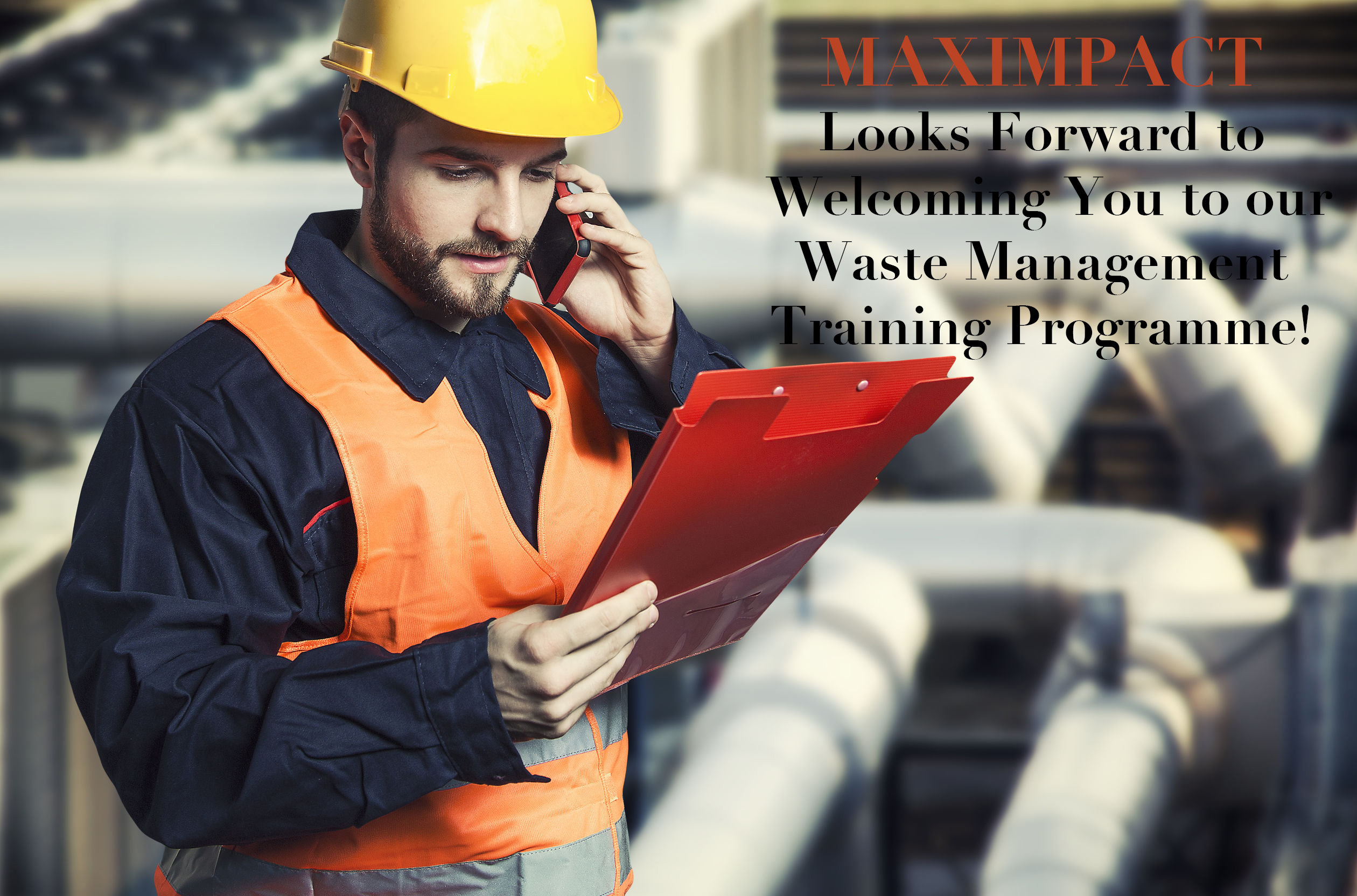