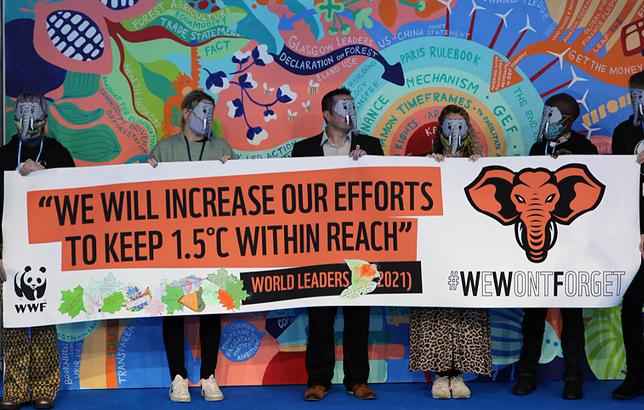 GLASGOW, Scotland, November 17, 2021 (ENS) – The UN climate conference COP26 concluded late Saturday night with a deal among the 196 Parties to forestall catastrophic climate change that hinged on a surprise development. Minutes before the final decision on the text of the Glasgow Climate Pact was taken, India proposed a weaker version of the language on coal. 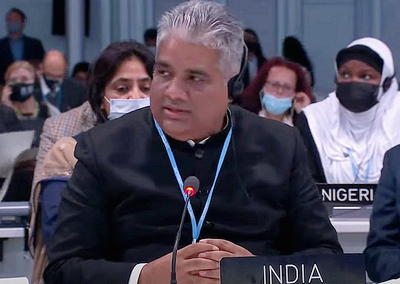 Bhupender Yadav of India serves as the Union Cabinet Minister of Labour and Employment, Environment, Forest and Climate Change. Here he raises the question phasing down rather than phasing out coal combustion to limit global warming. November 13, 2021, Glasgow, Scotland (Screengrab from video courtesy UNFCCC) Posted for media use

Speaking for a group of developing countries including China, India’s Climate Minister Bhupender Yadav questioned how developing countries could pledge to phase out coal burning and fossil fuel subsidies when they still have to “deal with their development agendas and poverty eradication.”

In the final vote, countries agreed to “phase down” not “phase out” coal. The decision covers “unabated” coal, creating an exemption for coal when its combution is combined with carbon capture and storage.

Several countries expressed anger at the last-minute change that will allow more climate-heating coal to be burned, and an emotional COP26 President Alok Sharma of the United Kingdom said he was “deeply sorry” for the way the final minutes of the COP unfolded.

U.S. Special Presidential Envoy for Climate John Kerry said in his final news conference that even having the mention of coal in the final document was a step forward.

Kerry said that in the 30 years he has been attending these climate meetings, this is the first time coal and fossil fuel subsidies have ever been addressed in the final communique. “That’s never happened … big countries that are dependent on coal have signed on to seeing it phased down. Does that mean it is phased down – no, but that’s the follow up,” Kerry said. 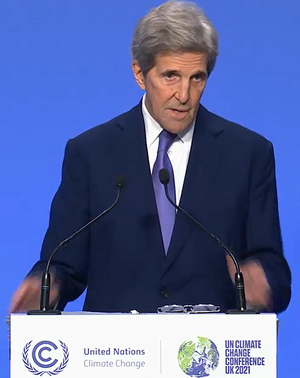 “Coal and the phase-down of coal is on the books. You have to phase down coal before you can end coal. So this is a beginning. We always knew Glasgow was not the finish line,” Kerry told reporters.

“Paris built the arena and Glasgow starts the race,” he said. “Today the starting gun was fired. We have nine years, this decade, this decisive decade.”

Plenty of Work to Do

The Glasgow Climate Pact, combined with increased ambition and action from countries, means that the Paris Agreement goal of keeping global warming to no more than a rise of 1.5° Celsius above pre-industrial levels remains in sight, but “it will only be delivered with concerted and immediate global efforts,” said UN Climate, the organizing agency for the 26th Conference of Parties to the Framework Convention on Climate Change, UNFCCC.

“We will be leaving Glasgow with clarity on the work we need to undertake to reach the 1.5-degree goal,” said Patricia Espinosa, the Mexican politician and diplomat who serves as the executive secretary of UNFCCC.

In her closing remarks to the conference, Espinosa highlighted four accomplishments that she says represent “significant progress in the world’s efforts against climate change.”

Adaptation has been central in all conversations at the COP, Espinosa said, and the texts approved by the Parties recognize this relevance. She was addressing how people can adapt to the situations already created by the changing climate such as intense wildfires, widespread drought, destructive flooding and extreme weather.

“We welcome the call to at least double finance for adaptation. We know the needs are still very much beyond what is currently available, and Parties must continue to focus on this issue,” she said.

“We now also have a work program to define the global goal on adaptation,” Espinosa said. “This will allow us to identify the collective needs and solutions for the climate impacts already happening now in all regions of the world.”

The Santiago Network Can Help

The Santiago Network, which provides technical support for countries to address and manage loss and damage, has now been enhanced, strengthening global efforts towards resilience, Espinosa told the COP26 closing session.

The vision of the Santiago Network is to catalyze the technical assistance of relevant organizations, bodies, networks and experts, for the implementation of relevant approaches for averting, minimize and addressing loss and damage at the local, national and regional level, in developing countries that are particularly vulnerable to the adverse effects of climate change (Decision 2/CMA.2, para 43)

The Santiago Network will connect vulnerable developing countries with providers of the technical assistance, knowledge, and resources they need “to address climate risks comprehensively in the context of averting, minimizing and addressing loss and damage.”

Funding the restoration of community functions after loss and damage due to climate change was one of the primary demands of civil society groups that attended COP26.

Espinosa explained that “regarding finance, an issue extensively discussed here at COP26, all Parties agree that much more support needs to be provided to developing counties.”

“In particular,” she said, “Parties have also recognized that the most vulnerable cannot be ignored, that much more finance for adaptation is needed and it has to be predictable.”

Espinosa said the UN organizers of COP26 are “disappointed” that a US$100 billion annual pledge from wealthy countries to help poorer ones to fight and adapt to global warming is still outstanding. She called on all donors to make it a reality as by next year.

The latest diplomatic effort, led by Germany and Canada, intends to draw that amount from wealthy donor countries by 2023, three years behind the schedule set in the Paris Agreement.

Kerry said in his concluding news conference that even having the mention of coal in the final document was a step forward.

In the 30 years he has been attending these climate meetings, Kerry said this is the first time coal and fossil fuel subsidies have been addressed in the final communique. “That’s never happened … big countries that are dependent on coal have signed on to seeing it phased down. Does that mean it is phased down – no, but that’s the followup,” he said.

Another avenue of progress was opened up in Glasgow as 45 governments pledged urgent action and investment to protect nature and shift to more sustainable ways of farming.

In addition, 95 high-profile companies committed to being “nature positive,” to work towards halting and reversing the decline of nature by 2030.

Governments and businesses joined with farmers and local communities at COP26, securing new agreements to protect nature and accelerate the shift to sustainable agriculture and land use practices by making them more attractive, accessible and affordable than unsustainable alternatives.

Twenty-six nations set out new commitments to change their agricultural policies to become more sustainable and less polluting, and to invest in the science needed for sustainable agriculture and for protecting food supplies against climate change, laid out in two Action Agendas.

All continents were represented, signatories include: Australia, Colombia, Germany, Ghana, India, and Vietnam.

National commitments aligned with this agenda include Brazil’s plan to scale its ABC+ low carbon farming program to 72 million hectares (277,993 square miles), saving a billion tons of emissions by 2030.

Germany plans to lower emissions from land use by 25 million tonnes by 2030, and the UK aims to engage 75 percent of farmers in low carbon practices by 2030. 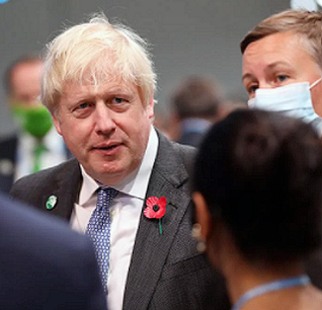 The UK also announced funding of £500 million (US$671 million) to support the implementation of the Forest, Agriculture and Commodity Trade (FACT) Roadmap that was launched during the World Leaders Summit November 1 and 2 at COP26. Twenty-eight countries are working together to protect forests while promoting development and trade.

Commitments made by countries at COP26 will help to implement the Glasgow Leaders’ Declaration on Forests and Land Use which aims to halt and reverse forest loss and land degradation by 2030, is now endorsed by 134 countries covering 91 percent of the world’s forests. 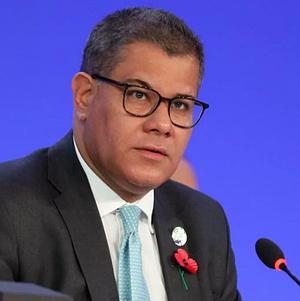 Alok Sharma is a British politician serving as President for COP26 and Minister of State at the Cabinet Office. Sharma resigned his previous position as Secretary of State for Business, Energy and Industrial Strategy in order to lead COP26. November 9, 2021 Glasgow, Scotland (Photo courtesy Earth Negotiations Bulletin) Used with permission

COP26 President MP Alok Sharma said, “If we are to limit global warming and keep the goal of 1.5C alive, then the world needs to use land sustainably and put protection and restoration of nature at the heart of all we do.”

Speaking at the close of COP26, UN Secretary-General Antonio Guterres said, “The approved texts are a compromise. They reflect the interests, the conditions, the contradictions and the state of political will in the world today. They take important steps, but unfortunately the collective political will was not enough to overcome some deep contradictions.”

“As I said at the opening, we must accelerate action to keep the 1.5 degree goal alive. Our fragile planet is hanging by a thread. We are still knocking on the door of climate catastrophe,” Guterres warned. “It is time to go into emergency mode – or our chance of reaching net zero will itself be zero.”

Current pledges, even if fulfilled, are only enough to limit global warming to 2.4° Celsius beyond pre-industrial levels, but at the start of COP26 two weeks ago, the forecast was worse – the pledges would limit warming – not to 1.5°, not to 2.0° – but to 2.7° Celsius.

As COP26 concluded on Saturday night, Secretary-General Guterres called for ending fossil fuel subsidies, phasing out coal, putting a price on carbon and “building resilience of vulnerable communities against the here and now impacts of climate change.”

“I know many of you are disappointed,” he acknowledged. “We won’t reach our destination in one day or one conference. But I know we can get there.”

“We are in the fight of our lives,” declared Guterres. “Never give up. Never retreat. Keep pushing forward. I will be with you all the way.”

COP27 is scheduled for November 7-18, 2022 in a city on the southern tip of the Sinai Peninsula on the coastal strip along the Red Sea – Sharm El-Sheikh, Egypt.