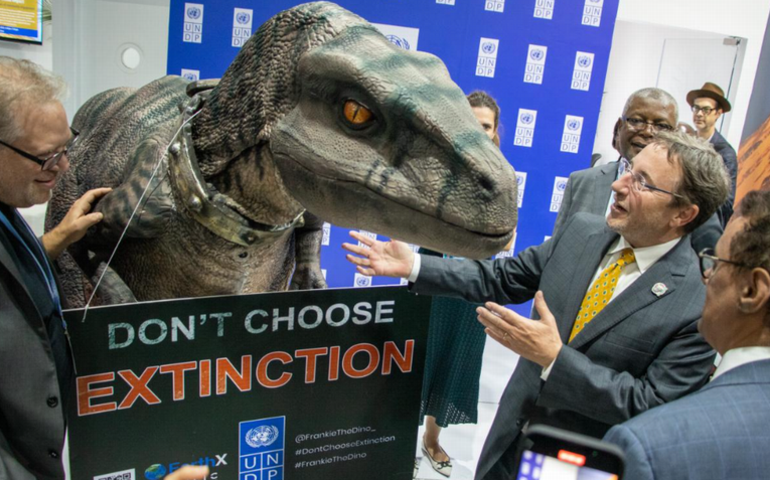 SHARM el-SHEIKH, Egypt, November 22, 2022 (Maximpact.com Sustainability News) – Overwhelmed by storms, drought, and rising seas, stressed out developing countries won creation of a fund for loss and damage at the UN’s annual climate conference, COP27, which wrapped on Sunday. More than 45,000 participants gathered in this resort town at the tip of the Sinai Peninsula for two weeks to negotiate implementation of the 2015 Paris Agreement on climate, build coalitions, solve problems, and find financing.

Despite a geopolitical landscape marked by conflicts, plus health and migration crises, COP27 resulted in countries delivering a package of decisions that reaffirmed their commitment to limit global temperature rise to 1.5 degrees Celsius above pre-industrial levels, one of the goals of the Paris Agreement.

The COP27 decisions strengthened action by countries to cut greenhouse gas emissions and adapt to those impacts of climate change that are already inevitable. They support the financing, technology and the capacity-building that developing countries need.

Creating a specific fund for loss and damage marked an important point of progress, with the issue added to the official agenda and adopted for the first time at COP27. Financial help to cover climate losses and damage was first raised as an issue more than 30 years ago by the Pacific island nation of Vanuatu, which the UN ranks as  most vulnerable to natural disasters. 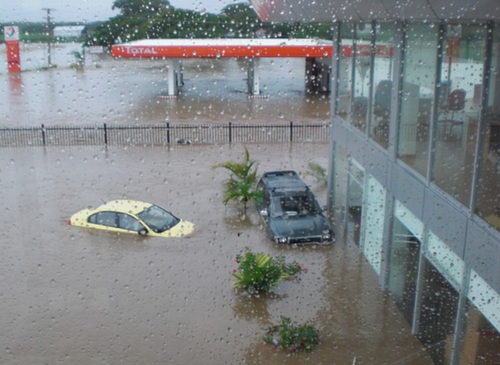 Fiji is flooded in yet another tropical cyclone, January 10, 2009 (Photo by snapboot) Creative Commons license via Flickr

Pacific leaders and activists celebrated announcement of the fund, yet warned that unless much more is done to limit warming to 1.5 degrees Celsius, entire islands could vanish under the rising seas.

Prime Minister of Fiji Frank Bainimarama tweeted, “From the bottom of my heart, vinaka vakalevu [thank you very much] to our tireless Pacific negotiators for securing a loss and damage fund at #COP27.”

Dr. Siobhan McDonnell, who drafted the proposal that became the loss and damage agreement, said, “It’s been 31 years of Pacific leadership in this space. It’s something that the Pacific should be very proud of. We finally have a framework that starts to say that in terms of the losses and damages that are currently being experienced by climate-vulnerable countries like the Pacific and small island states, they do not need to bear the whole responsibility through no fault of their own,” she told The Guardian newspaper.

Today, Pacific island residents who endure cyclones, seawater encroachment and crop disruptions due to global warming have to finance their own response and recovery. They have long maintained that because they emit few greenhouse gases, the major emitters, such as the United States and China, should compensate them for their losses.

The loss and damage financing mechanism was not finalized until the very end of COP27. It finally was established after negotiations in Sharm el Sheikh went 40 hours past the scheduled close of the conference on November 18. It was finally gaveled to conclusion just after 9 am local time on Sunday November 20.

Hafij Khan, the Least Developed Countries climate negotiating group’s co-coordinator on loss and damage, told the International Institute for Environment and Development in an interview what loss and damage funding will mean for these vulnerable nations.

“The severe flash floods in northeastern districts in my country of Bangladesh are a recent example of the absolute devastation caused by huge loss and damage to the lives and livelihoods of millions of people,” Khan said.

But Khan explained that the impacts of climate change “already go far beyond our capacity to cope, and we know they’ll only get worse – more frequent and more intense.”

“We can’t avoid all the negative effects of climate change; we need to find ways to address the loss and damage that our people and communities are increasingly experiencing,” Khan lamented. “The floods in my country killed over 100 people, caused hundreds of schools to close, displaced hundreds of thousands of people, and washed away crops and livestock.”

Before the  final COP27 gavel came down, governments agreed to establish a “transitional committee” to make recommendations on how to operationalize both the new loss and damage funding arrangements and the fund itself at COP28 next year.

The 28th session of the Conference of the Parties (COP 28) to the UN Framework Convention on Climate Change will convene from November 30 to December 12, 2023. It will take place in Dubai, one of the seven United Arab Emirates.

The first meeting of the transitional committee is expected to take place by the end of March 2023.

Parties agreed on the institutional arrangements to operationalize the Santiago Network for Loss and Damage, to catalyze technical assistance to developing countries that are particularly vulnerable to the adverse effects of climate change.

COP27 made progress on adaptation, with governments agreeing on the way to move forward on the Global Goal on Adaptation, which will conclude at COP28 and inform the first Global Stocktake, improving resilience amongst the most vulnerable countries.

At COP27 new pledges, totalling more than US$230 million, were made to the Adaptation Fund to help more vulnerable communities adapt to climate change through concrete adaptation solutions.

UN Climate Change’s Standing Committee on Finance was requested to prepare a report for consideration at COP28 next year on doubling adaptation finance.

A global transformation to a low-carbon economy is expected to require investments of at least US$4 to $6 trillion a year, according to a decision known as the Sharm el-Sheikh Implementation Plan.

Delivering such funding will require a swift, comprehensive transformation of the financial system and its structures and processes, engaging governments, central banks, commercial banks, institutional investors and other financial actors.

With this in mind, at COP27 multilateral development banks shared their thoughts on how to release climate funding not currently accessible.

For instance, the Asian Development Bank (ADB) released a new report, “Unlocking Islamic Climate Finance.” It outlines how greening Islamic capital markets and social finance, mobilizing project finance for infrastructure and boosting financial inclusion, can play a key role in funding the climate agenda. It details the 14 ADB developing member countries with majority Muslim populations, assesses the growth of the nearly US$3 trillion global Islamic finance market, and explores how its faith-based principles support the transition to a green agenda. 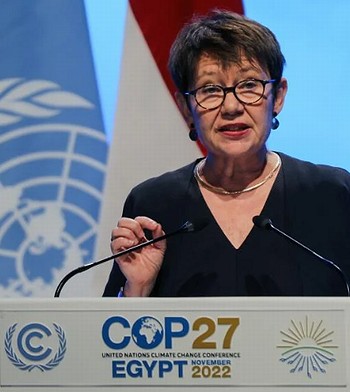 The European Bank for Reconstruction and Development (EBRD) has committed to increase the proportion of its green investments to at least 50 percent of the total by 2025. The bank says it is finalizing its pledge to align all its operations with the goals of the Paris Agreement by January 1, 2023.

The World Bank Group delivered a boost for climate finance overall – a record US$31.7 billion for climate-related investments in fiscal year 2022. What does that mean on the ground? In Nigeria, for instance, it means the difference between life and death for 3.4 million people.

Climate change is causing severe water stress in Nigeria, causing droughts to increase in frequency and intensity and affecting Nigeria’s economic growth. A World Bank analysis shows it could cost the country as much as 30 percent of its GDP by 2050, affecting millions of households, worsening income and food security, and increasing the risk of violent conflict.

A World Bank US$700 million sustainable landscape management project, “Agro-Climatic Resilience in Semi-Arid Landscapes,” aims to develop 20 watershed management plans covering all of northern Nigeria. It will prioritize investments that can slow desertification while supporting natural resource-based livelihoods such as sustainable oases and wetlands. The project ensures community participation, building local capacity and coordination among groups. More than 85 percent of this financing supports building climate resilience and adaptation.

Malpass introduced a new report from the World Bank showing that investing an average of 1.4 percent of GDP annually could reduce emissions in developing countries by as much as 70 percent by 2050 and boost their climate resilience.

The analysis, “Climate and Development: An Agenda for Action,” compiles and harmonizes results from the World Bank Group’s Country Climate and Development Reports, covering over 20 countries that account for 34 percent of the world’s greenhouse gas emissions. It shows that in lower-income countries that are more vulnerable to climate risk, increased amounts of concessional finance and grants will be needed to manage climate change impacts and develop along a low-carbon path. 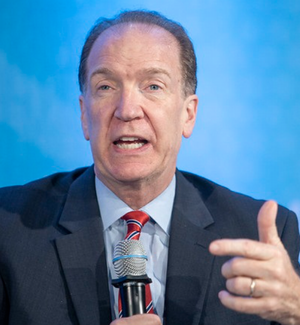 “SCALE will pool funding from the global community and provide grant payments on a results basis to client countries for lowering greenhouse gas emissions,” Malpass explained.

“The fund will also help countries build a track record of projects that unlock private sector funding through international carbon markets,” Malpass said. He invited all partners at COP27 “to consider this approach to direct financing of climate action,” utilizing contributions from donors, foundations and the private sector.

“High-income countries will need to lead the way in the low-carbon transition,” Malpass said. “They can reduce their own emissions, reduce exports of high-carbon-intensity fuels, and increase their funding for climate action globally. Given the current inflation problem, they should adopt policies to increase production in sustainable ways to respond to the current shortage of food, energy and fertilizer.”

Malpass called on “major current and future emitters in the developing world” to take responsibility for reducing their greenhouse gas emissions. “They need to find low-carbon growth paths to provide reliable and affordable electricity to their people. And they should choose pathways that provide a just transition,” Malpass urged.

And Malpass signaled that the big banks will come up with more climate financing. “At COP27, there have been recommendations for Multilateral Development Banks to significantly increase our climate finance,” the World Bank leader said. “At our recent Annual Meetings, there was a broad recognition on the need to increase financing for global public goods, especially climate action. I warmly welcome these calls. Successful climate action to reduce greenhouse gas emissions will take a concerted global push, and we are committed to this effort.”