Coronavirus Pandemic: Robots to the Rescue

Nicknamed Cloud Ginger, CloudMinds’ XR-1 is the first humanoid service robot. Powered by a cloud brain and smart joints, XR-1 is capable of vision-controlled robotic manipulations such as grabbing objects, pouring beverages, and threading a needle. 2020 (Image courtesy CloudMinds) Posted for media use

SINGAPORE, May 29, 2020 (Maximpact.com Community Solutions News) – Healthcare providers around the world need all the help they can get to stay healthy themselves while they support whole communities recovering from the coronavirus. Often now, from China to Singapore, from Spain to the United States, the help they are getting comes from robots.

In March, a field hospital staffed by robots opened in the Hongshan Sports Center in Wuhan, China, where the coronavirus pandemic began late last year. The trial is aimed at relieving exhausted healthcare workers even as the outbreak in China has slowed in recent weeks.

Known as the Smart Field Hospital, it is a project involving Wuhan Wuchang Hospital, the state-owned company China Mobile, and CloudMinds , a maker of cloud robotics systems based in China and the United States.

Patients wear smart bracelets and rings that sync with CloudMinds’ Artificial Intelligence platform so their vital signs – temperature, heart rate and blood oxygen levels – can be monitored. Doctors and nurses wear the devices to catch early signs of infection.

CloudMinds robots are put through their paces. Supported by multi-modal AI capabilities such as smart vision, smart voice and smart motion, these robots can acquire skills, including recognizing a VIP visitor, grabbing a requested object, and opening doors. 2020 (Screengrab from corporate video) Posted for media use

“Bored patients in quarantine found the humanoid robots such as Cloud Ginger very helpful, as they offered useful information and much needed interaction and entertainment,” said CloudMinds founder and CEO Bill Huang. “Doctors have found the robots and smart devices helpful in monitoring patient vital signs remotely without direct contact.”

Elsewhere in the Smart Field Hospital, other robots provide food, drinks and medicine to patients, as well as information and entertainment through dancing. Still other autonomous robots spray disinfectant and clean the floors.

While the Smart Field Hospital is on the front lines, it has by no means the only robots out there fighting the coronavirus that has to date infected 4,628,903 people and killed 312,009 across the world, according to the World Health Organization.

“COVID-19 could be a catalyst for developing robotic systems that can be rapidly deployed with remote access by experts and essential service providers without the need of traveling to front line,” a group of 13 researchers wrote in a March editorial for the journal “Science Robotics.” They pointed to several key areas where robots could make a difference, such as disinfection using ultraviolet-C light.

“Instead of manual disinfection, which requires workforce mobilization and increases exposure risk to cleaning personnel, autonomous or remote-controlled disinfection robots could lead to cost-effective, fast, and effective disinfection,” the researchers wrote.

“New generations of robots, from macro- to microscale, could be developed to navigate high-risk areas and continually work to sterilize all high-touch surfaces,”  they suggested.

Far to the south of Wuhan, in Singapore, researchers from Nanyang Technological University (NTU Singapore) have developed a semi-autonomous robot that can disinfect large surfaces quickly to support Singapore’s fight against COVID-19.

Named eXtreme Disinfection roBOT (XDBOT), it can be wirelessly controlled from a laptop or tablet, removing the need for cleaners to be in contact with surfaces, and reducing the risk of picking up the virus from potentially contaminated areas.

Made up of a semi-autonomous control unit with motorized wheels, XDBOT has a six-axis robotic arm that can mimic human movement to reach awkward locations such as under tables and beds, as well as doorknobs, tabletops and light switches.

Instead of a conventional pressure-spray nozzle, it uses an electrostatic-charged nozzle to ensure a wider and further spread of the disinfectant, behind and over hidden surfaces.

Leader of the project, Professor Chen I-Ming, a roboticist from the NTU Robotics Research Centre, said the XDBOT was conceived when COVID19 cases started to spike worldwide in mid-February and disinfection efforts were being stepped up at Changi Airport, local hotels and hospitals.

“To stop the transmission of a virus means we need a way to quickly disinfect surfaces, which is a labour-intensive and repetitive activity,” Professor Chen explained. “Using our new robot from a distance, a human operator can precisely control the disinfection process, increasing surface area cleaned by up to four times, with zero contact with surfaces,” he said.

XDBOT can navigate semi-autonomously in any environment using LIDAR (Light Detection and Ranging) and high-definition cameras, while its arm is controlled by a human operator.

Developed and built on the NTU Smart Campus, the robot went from a theoretical concept to an operational prototype in two months. If trials are successful and with sufficient commercial demand, the three spin-offs aim to quickly develop a production-ready version of the XDBOT and scale up production.

NTU Senior Vice-President (Research) Professor Lam Khin Yong said, “During this challenging period, we are proud that our scientists have come together and gone the extra mile to develop a homegrown robotic solution to help address the current manpower crunch in the sanitation industry and to minimize transmission risks associated with COVID-19.”

Halfway around the world in Spain, a robot created by the Institute of Automatics and Industrial Computing of Spain’s Valencia Polytechnic University can disinfect the most sensitive sanitary areas of hospitals – operating rooms, intensive care areas or patient resuscitation rooms – faster and more efficiently than humans can.

“It is a remote-controlled robot that will make it possible to clean broad areas in an efficient way. It has been created to clean rooms, but can also adapt to other surroundings and spaces that will need efficient and fast sanitation solutions, such as public transport,” says Francisco Blanes, director of the ai2 Institute of Valencia Polytechnic.

Design of this robot is still being refined. Researchers realized that the initial design could be given greater autonomy and versatility by adding artificial vision and control systems. The first field tests are planned shortly.

Professor Pedro Morillo, with the University of Valencia’s Department of Computer Science, explains that this mobile robot can simultaneously disinfect based on high intensity germicidal ultraviolet light emitted by a xenon gas light, and also create virtual maps with spaces, minimizing trajectories with an autonomous navigation system that uses artificial intelligence algorithms.

Other disinfections in use today can take at least an hour to be effective, but Morillo says, “We consider obtaining disinfections of these sanitary spaces in a few minutes, improving their temporary availability rates and reducing the risk of the operators who have to work in the midst of the coronavirus health alert.”

To the north in Odense, Denmark, the robotics company UVD Robots is shipping out truckloads of its robots every week to staff the front lines in the coronavirus battle. 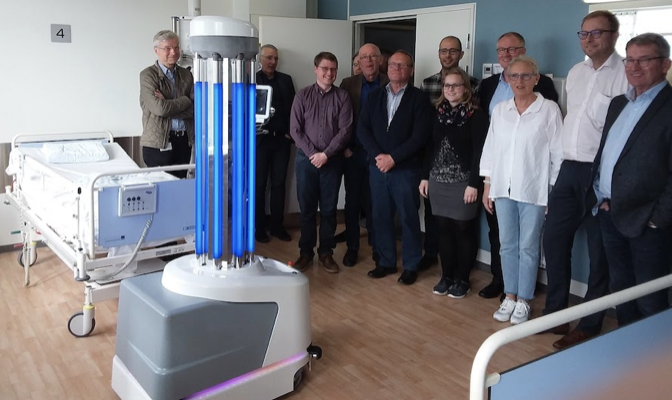 Award-winning robots from Denmark’s UVD Robots emit concentrated UV-C light as they glide along hospital corridors and through patient rooms. Their germicidal effect removes virtually all airborne viruses and bacteria on the surfaces of a room. 2020, Odense, Denmark (Photo courtesy UVD Robots) Posted for media use

The UVD bots emit ultraviolet UV-C light that can decontaminate surfaces by tearing apart strands of virus DNA. They too map their environment as they move around autonomously guided by lidar, shining 360-degree UV-C light from a mast.

Now sold in more than 40 countries, UVD Robots is delivering its self-driving disinfection robots to hospitals in Asia, and to healthcare markets in Europe and the United States, not only for use in hospitals but also for use in disinfecting prisons, hotels and airports.

The invention increases the safety of both staff, patients and their relatives by reducing the risk of contact with bacteria, viruses and other harmful microorganisms. The concentrated UV-C light emitted by the robots as they drive has a germicidal effect that removes virtually all airborne viruses and bacteria on the surfaces of a room. These results led to the UVD robot winning the robotics industry’s “Oscar” the IERA Award in 2019 for Innovation and Entrepreneurship in Robotics and Automation.

The United States, too, is turning out robots to relieve its own healthcare workers and those of countries across the world.

Texas-based health-care services company Xenex Disinfection Services is sending virus-zapping robots to East Asia and Italy, as well as to the largest Texas city, Houston. The Westin Houston Medical Center is rolling out Xenex’s LightStrike robots, which use UV light to disinfect guest rooms and common areas of coronavirus.

In Massachusetts, Boston Dynamics  has developed a legged robot nicknamed Spot that can be deployed to support frontline staff responding to the pandemic in ad-hoc environments such as triage tents and parking lots. 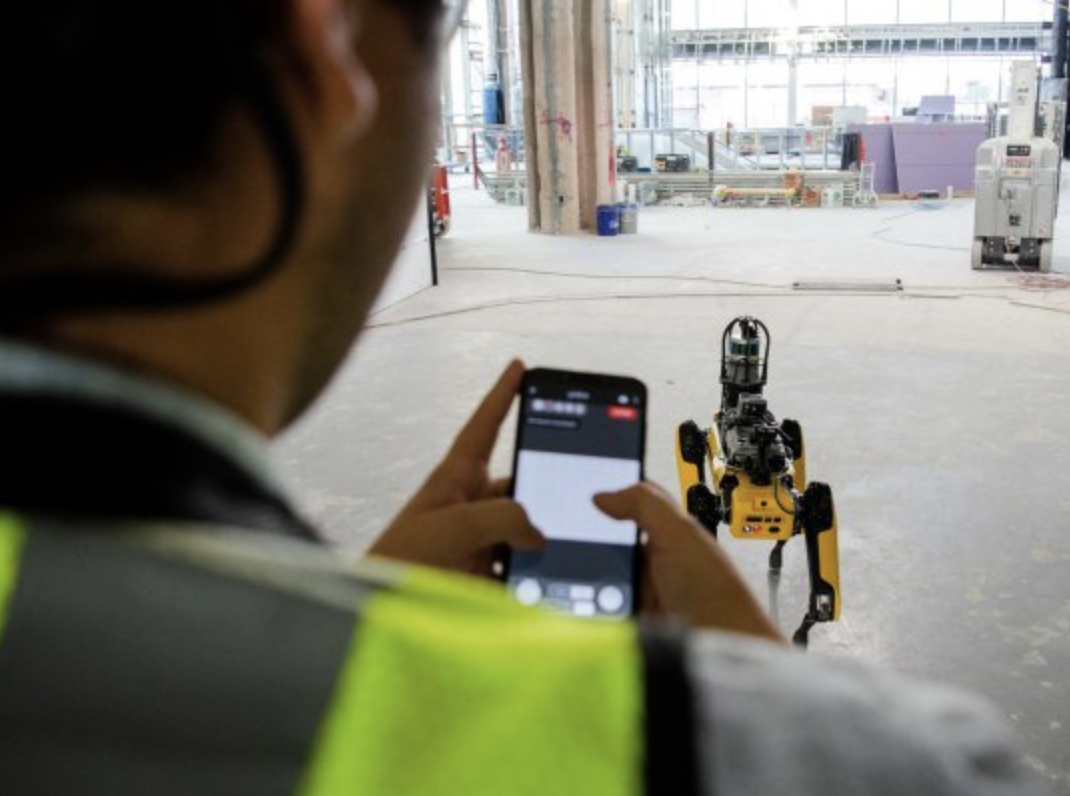 Spot is now in use at a local Boston facility, Brigham and Women’s Hospital, where the medical team uses the robot as a mobile telemedicine platform, allowing healthcare providers to remotely triage patients.

With current protocols at Boston hospitals, patients suspected of having COVID-19 line up in tents outside to answer questions and get initial assessments. This requires up to five medical staff, placing those individuals at high risk of contracting the virus.

But now Spot is on the job. Through an iPad and a two-way radio mounted on the robot’s back, healthcare providers can video conference with patients as they remotely direct the mobile robot through lines of sick individuals in the tents. Doctors are able to speak with patients from afar, possibly even from their own homes. For every intake shift complemented by a teleoperated robot shift, at least one healthcare provider is kept safe from the disease.

And the robots just keep on coming. Watch this blog.