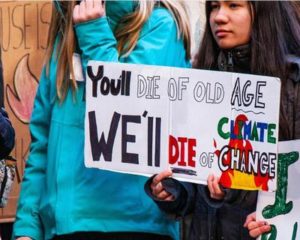 NAIROBI, Kenya, December 10, 2019 (Maximpact.com News) – As environmental disasters unfolded across the world in 2019, it is fearless children and young adults who have dared to speak out in defense of their right to a safe and healthy future with a liveable climate, clean air and clean water.

Instead in 2019, children were exposed to crises they played no part in creating. Every day, around 93 percent of the world’s children under the age of 15 years (1.8 billion children) breathe air that is so polluted it puts their health and development at serious risk, says the World Health Organization (WHO).

As the increasingly bleak science such as that most recently detailed in the United Nations Environment Programme’s (UNEP) “Emissions Gap Report,” documents the failings of governments around the world to tackle the climate crisis, the world’s youth are already on it, says the UN’s environment agency, based in Nairobi.

UNEP’s 2019 Emissions Gap Report says that even if all current unconditional commitments under the Paris Agreement are implemented, temperatures are expected to rise by 3.2°Celsius, bringing ever wider-ranging and more destructive climate impacts. UNEP warns that collective ambition must increase more than fivefold over current levels to deliver the cuts needed over the next decade if the world is to meet the 1.5°C goal of the Paris accord.

Tim Christopersen, head of the Freshwater, Land and Climate Branch at UNEP, said, “The task is clear: we have to turn the tide on environmental degradation and climate change. In the digital age, we can make everyone part of the solution.”

“Young people everywhere are demanding this kind of new power, and are showing us how to do it,” Christopersen said, offering insights into the lives of some of the young people who are dedicating themselves to an improved environmental future.

Greta Thunberg’s stirring speech in January at the World Economic Forum in Davos, where she exclaimed, “Our house is on fire,” sent alarm bells ringing throughout the year. 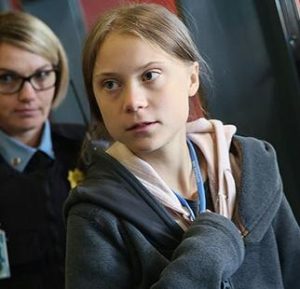 The Swedish 16-year-old’s urgent calls to action were taken up by youth around the world, who turned out for the largest climate strikes in world history. The September 2019 climate strikes, also known as the Global Week for Future, brought young people out in the streets of many cities to demand action to address climate change.

The determined young people include 24-year-old Miranda Wang, whose US$1.5 million technology in North America is tackling the plastic crisis. With an estimated eight million tonnes of plastic washed into the sea each year, her technology is taking previously unrecyclable plastic and turning it back into chemicals as part of a circular design model. She has hired eight people in 12 months, driving the green economy.

When just 18 years old, Canadian innovators Miranda Wang and Jeanny Yao of Vancouver discovered a bacterium that could “eat” plastics. Now at 25, Wang and Yao serve as the co-founders of, a company based in Menlo Park, California, that works to break down previously unrecyclable plastics, such as dirty grocery bags and food wrap, into chemicals that can be both biodegraded and used to create practical items. 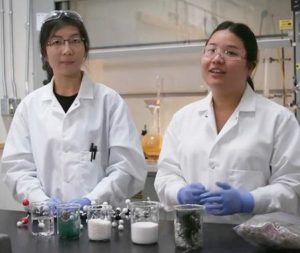 Jenny Yao (left) and Miranda Wang in the lab where they explore recycling previously unrecyclable plastics. 2018 (Screengrab from video posted by UNEP) Posted for media use

BioCellection is working with municipal leaders and private waste management firms in the San Francisco area to scale up. By 2023, Wang and her colleagues expect the company to be recycling 63,000 metric tons of plastic waste a year, which would eliminate 390,000 metric tons of carbon dioxide emissions by replacing the need for oil-derived petrochemicals, an ingredient in plastics.

Wang was recently named a Laureate of ROLEX Awards for Enterprise <https://www.rolex.org/rolex-awards>inrecognition of her work to create a healthier future for the planet. In 2018, the UCLA Institute of the Environment and Sustainability presented her with the 2018 Pritzker Emerging Environmental Genius Award, which carries a $100,000 prize. UNEP named Wang a 2018 Young Champion of the Earth.

The young innovators include 26-year-old Arpit Dhupar, whose efforts to tackle India’s air pollution crisis have resulted in a retrofit diesel engine filter. It removes 90 percent of soot and dangerous particulate matter from the air, and turns it into ink used to print boxes for large brands.

Dhupar’s factory has increased five-fold in the last 12 months, creating employment in India and proving that a circular economy is indeed possible when grit and determination are applied.

They are 26-year-old Hugh Weldon, whose “fit bit” for food is helping consumers track their shopping to reduce their carbon emissions, making them aware of their food footprint. One-third of all food produced in the world, approximately 1.3 billion tonnes, is thrown away every year. A huge waste of resources and a disregard of the 820 million people who still go to bed hungry.

They are 27-year-old Shady Rabab, whose Rabab Garbage Project is raising awareness about plastic pollution and teaching children from vulnerable communities in Egypt how to make beautiful music from trash at the same time. His project keeps kids off the street while showing them the beauty of coming together through art.

In Nepal, 30-year-old Sonika Manandhar is driving a transition to electric mobility. While helping women get finance to upgrade their electric vehicles, she is making electric transport available to more men and women.

UNEP named Manandhar one of the 2019 Young Champions of the Earth, a prize awarded every year to seven entrepreneurs under the age of 30 with big ideas for environmental change. Each of the young champions receives US$15,000 in seed funding and $9,000 to communicate their ideas and broadcast their stories of hope and change.

In Russia, 29-year-old Marianna Muntianu, another 2019 Young Champion of the Earth, is sparking a digital revolution to tackle wildfires and deforestation in a country where millions of hectares of forest have been destroyed by the fires sweeping across Siberia.

This year alone, the Siberian wildfires which began in July have since charred 2.6 million hectares, according to the U.S. National Aeronautics and Space Administration (NASA) satellite imagery and local forestry services.

By involving the 1.3 billion people around the world who play computer games, Muntianu’s virtual “Plant the Forest” has already restored 400,000 real trees in 17 regions of Russia.

“Many people live so far away from forests and are not sure how to help, with little free time. I explored more interactive games, then the mobile game ‘Plant the Forest’ was born,” Muntianu said.

The educational mobile game combines the virtual world with reality. Players grow their own virtual forest, complete with insects, animals and birds, and in parallel, new forests are planted by volunteers. 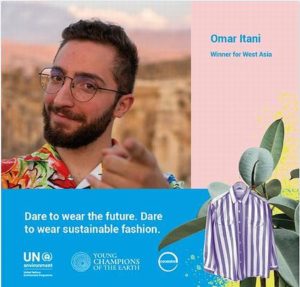 In Lebanon, the finger of Omar Itani, another 2019 Young Champion of the Earth, is on the pulse of a new fashion trend. ThredUp <https://www.thredup.com/>, the world’s largest online second-hand shopping destination, reports that millennials, those aged 25–37, and generation Z, aged 18–24, are driving a growing market for second-hand clothes.

Twenty-four-year-old Itani’s second-hand stores FabricAID, <https://www.fabricaid.me> based in Beirut, have upcycled 75,000 kilograms of clothing and sold more than 50,000 items to over 10,000 people, mostly refugees or disadvantaged communities with little income, giving them the option of buying low-cost clothing rather than depending on donations.

Outside COP25 on Friday night more than 500,000 people marched through the Spanish capital led by Thunberg. Protests continued through the weekend, with Extinction Rebellion and other groups from throughout the world.

Today, Thunberg and other youth activists will meet with officials inside the conference.

“Youth has played an enormous role, a fantastic role, throughout this year in order to raise awareness, in order to impress the need to take action urgently,” said Espinosa. “I want to recognize all of you, all of your voices. Each individual voice counts in making this possible.”