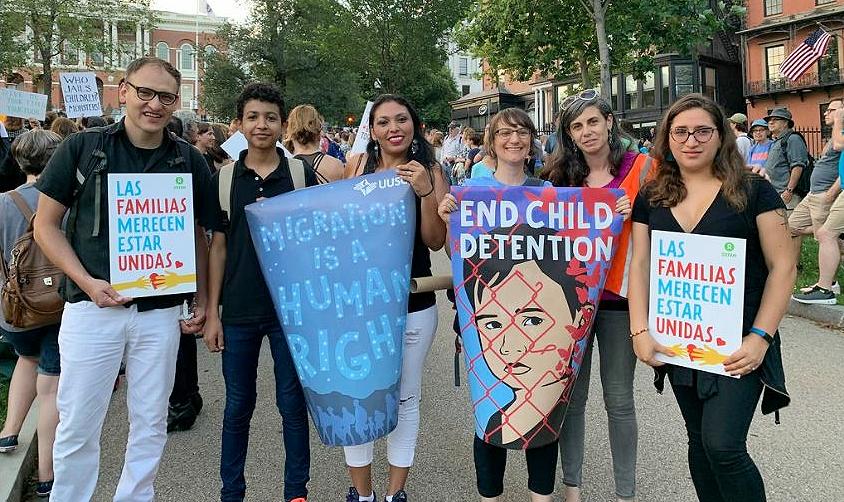 WASHINGTON, DC, July 23, 2019 (Maximpact News) – The Trump administration is ending asylum protections for most Central American migrants, under a new rule announced by the Departments of Justice and Homeland Security on July 16. Refugees transiting through third countries to the U.S. southern border are now barred from seeking asylum in the United States if they did not apply for, and were denied, protection from persecution or torture where it was available in at least one third country on the way.

Those seeking asylum are mainly from the impoverished and violence-plagued Central American countries of Guatemala, Honduras and El Salvador, who travel through Mexico on their way to the United States.

Asylum is a “discretionary benefit” offered by the United States Government to those fleeing persecution on account of race, religion, nationality, membership in a particular social group, or political opinion, states the new interim final rule, known as “Asylum Eligibility and Procedural Modifications.”

U.S. Attorney General William Barr said, “This rule is a lawful exercise of authority provided by Congress to restrict eligibility for asylum. The United States is a generous country but is being completely overwhelmed by the burdens associated with apprehending and processing hundreds of thousands of aliens along the southern border.”

Despite the fact that most asylum seekers fleeing violence from south of the U.S. border arrive exhausted and destitute, Barr focused his remarks on “forum shopping,” which means filing a legal action in a location that a plaintiff considers advantageous.

“This rule will decrease forum shopping by economic migrants and those who seek to exploit our asylum system to obtain entry to the United States, while ensuring that no one is removed from the United States who is more likely than not to be tortured or persecuted on account of a protected ground,” Barr said.

The new bar is subject to three limited exceptions:

Congress passed a $4.6 billion funding bill late in June that gives the Department of Health and Human Services and the Department of Homeland Security to improve the inhumane conditions detained migrant children are facing in cages at the border, expand medical care, and provide better access to essential items like clothing, hygiene products and baby formula.

This extra funding is important to Department of Homeland Security Acting Secretary Kevin McAleenan, known for his hardline immigration policies, but it’s not enough to fix the situation at the U.S. southern border.

“While the recent supplemental funding was absolutely vital to helping confront the crisis,” said McAleenan, “the truth is that it will not be enough without targeted changes to the legal framework of our immigration system. Until Congress can act, this interim rule will help reduce a major ‘pull’ factor driving irregular migration to the United States and enable DHS and DOJ to more quickly and efficiently process cases originating from the southern border, leading to fewer individuals transiting through Mexico on a dangerous journey.”

“Ultimately,” said McAleenan, “today’s action will reduce the overwhelming burdens on our domestic system caused by asylum-seekers failing to seek urgent protection in the first available country, economic migrants lacking a legitimate fear of persecution, and the transnational criminal organizations, traffickers, and smugglers exploiting our system for profits.”

The Trump administration is reacting to a steep increase in the number of refugees and migrants seeking asylum at the U.S. southern border. The administration complains that these people “are misusing the asylum system” and are presenting “meritless asylum claims.”

The text of the new rule explains, “When the expedited procedures were first implemented approximately two decades ago, very few aliens within those proceedings claimed a fear of persecution. Since then, the numbers have dramatically increased.”

FY 2019 is expected to see an even greater increase in claims, with more than 35,000 credible-fear claims received in the first four months of the fiscal year.

“This unsustainable, increased burden on the U.S. immigration system” also extends to the Department of Justice. U.S. immigration courts received over 162,000 asylum applications in FY 2018, a 270 percent increase from five years earlier,” the rule states.

“Only a small minority of these individuals, however, are ultimately granted asylum,” the DOJ and DHS said in their announcement of the new rule. “The large number of meritless asylum claims places an extraordinary strain on the nation’s immigration system, undermines many of the humanitarian purposes of asylum, has exacerbated the humanitarian crisis of human smuggling, and adversely impacts the United States’ ongoing diplomatic negotiations with foreign countries.”

“This rule mitigates the strain on the country’s immigration system by more efficiently identifying aliens who are misusing the asylum system to enter and remain in the United States rather than legitimately seeking urgent protection from persecution or torture,” the rule says, to justify its existence.

Historically, the United States has resettled more refugees than any other country, three million since 1980, according to the Pew Research Center.

Now, the Trump administration is considering cutting the number of refugee admissions next year to nearly zero, three people familiar with the plan have told the news outlet Politico.

During a meeting of security officials on refugee admissions last week, a U.S. Citizenship and Immigration Services representative aligned with White House immigration adviser Stephen Miller suggested setting a cap at zero, the sources said. Homeland Security Department officials at the meeting later floated making the level anywhere from 3,000 to 10,000, one of them said.

The State Department declined to comment on the potential cap. The departments of Homeland Security, Justice, Defense and the National Security Council, which had representatives at the meeting, did not respond to Politico’s requests for comment.

UN High Commissioner for Refugees Filippo Grandi described the new rule as “severe and not the best way forward.”

The UN refugee agency expressed deep concern about the new rule, emphasizing that it will endanger vulnerable people in need of international protection from violence or persecution. The vast majority of people arriving at the border in recent months have been Central Americans fleeing gang violence and severe poverty.

In a statement, the UNHCR said the new rule “excessively curtails the right to apply for asylum” and “is not in line with international obligations.”

One little-noticed consequence of the new policy, reports ProPublica, is that those who decided against entering the United States illegally are now paying a price for having followed the Trump administration’s previous rule for proper migrant behavior: Come to an official port of entry at the border, then invoke the right under U.S. law to humanitarian protection.

If those who have spent months waiting in Mexico to gain legal entry to the U.S. as asylum-seekers had crossed the border illegally when they arrived, they would have had their asylum claims heard under the rules in place at that time. But by choosing to wait to set foot on U.S. soil and trigger their asylum rights, they will now be subjected to the new rule once they do enter — a rule that means most of them are ineligible.

The Trump administration claims it adheres to international law by allowing migrants barred from asylum to seek a lesser form of humanitarian protection called “withholding of removal,” which is harder to qualify for than asylum.

ACLU attorney Lee Gelernt said, “This is the Trump administration’s most extreme run at an asylum ban yet. It clearly violates domestic and international law, and cannot stand.”

Baher Azmy, Center for Constitutional Rights legal director, said, “This is the latest – and deeply dangerous – effort by the Trump administration to inflict maximal cruelty on vulnerable people fleeing desperate conditions for safety here. This rule also serves to project the administration’s rejection of the fundamental, international post-war consensus that human rights matter. They still do, and this suit seeks to vindicate their value.”

Melissa Crow, senior supervising attorney at the Southern Poverty Law Center’s Immigrant Justice Project, said, “This administration’s relentless war on asylum seekers is nothing short of despicable. Through policy after policy, this administration has manufactured the crisis at our southern border. The new rule would only make this situation worse, while jeopardizing the safety and security of countless migrants fleeing persecution.”

In federal court in Washington, DC, a similar suit was brought by two nonprofits, the Capital Area Immigrants’ Rights Coalition and the Refugee and Immigrant Center for Education and Legal Services (RAICES) <>, represented by the lawfirm of Hogan Lovells.

“The rule would strip asylum eligibility from many of those who need it most: migrants fleeing horrific situations in their home countries, which are some of the most dangerous places in the world,” said Hogan Lovells Partner Neal Katyal. “Under U.S. law, people who enter or seek to enter the Unites States have the right to be considered for asylum, and this lawsuit seeks to protect and preserve this crucial right.”

“Regardless of where they began their journey, many of the individuals entering our southern border have legitimate claims for asylum in the United States,” said  RAICES Executive Director Jonathan Ryan. “This rule creates yet another barrier to the right to seek protection that is guaranteed under both federal and international law.”

On Monday, Judge Timothy Kelly in the U.S. District Court for the District of Columbia withheld his ruling on whether to issue a temporary restraining order to block the Trump administration’s rule on asylum seekers pending a trial, saying he would make that decision soon.