Decent Living for All Need Not Cost the Earth 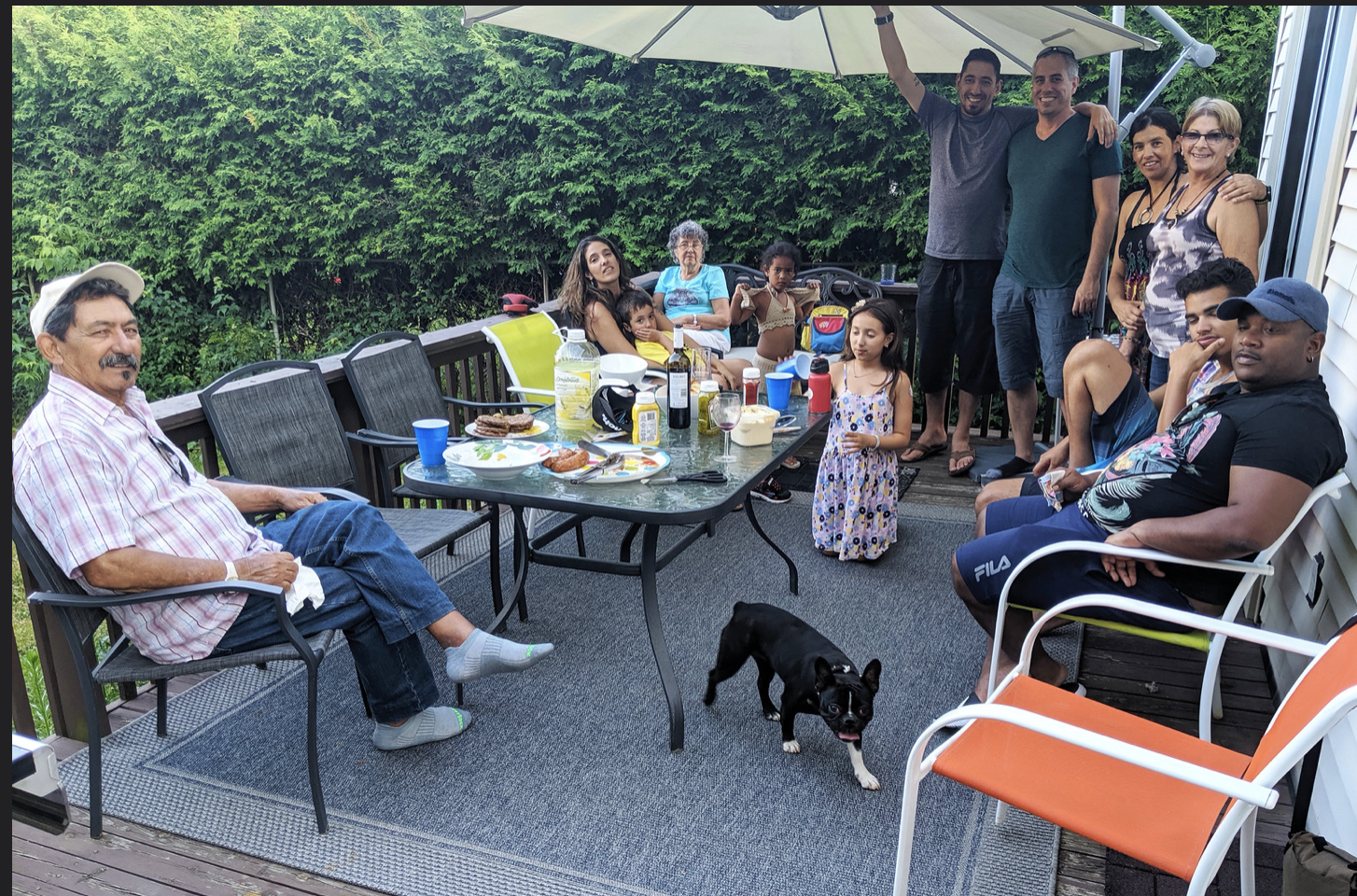 LEEDS, UK, July 2, 2021 (Maximpact.com News) – Securing decent living standards for everyone on Earth while fighting climate breakdown will require fundamental economic changes, according to new research led by the UK’s University of Leeds.

Published June 30 in the journal “Global Environmental Change,” the study examined what policies could enable countries to use less energy while providing the whole population with decent living standards – defined as conditions that satisfy fundamental human needs for food, water, sanitation, shelter, health, education, and work.

“But in the current economic system, no country in the world accomplishes that – not even close,” Vogel said. “It appears that our economic system is fundamentally misaligned with the aspirations of sustainable development. It is unfit for the challenges of the 21st century.”

The researchers conclude that governments need to improve public services, reduce income disparities, scale back resource extraction, and abandon economic growth in affluent countries, for people around the world to thrive while cutting global average energy use in half.

Without such fundamental changes, they warn, we face a dilemma of sustainability. 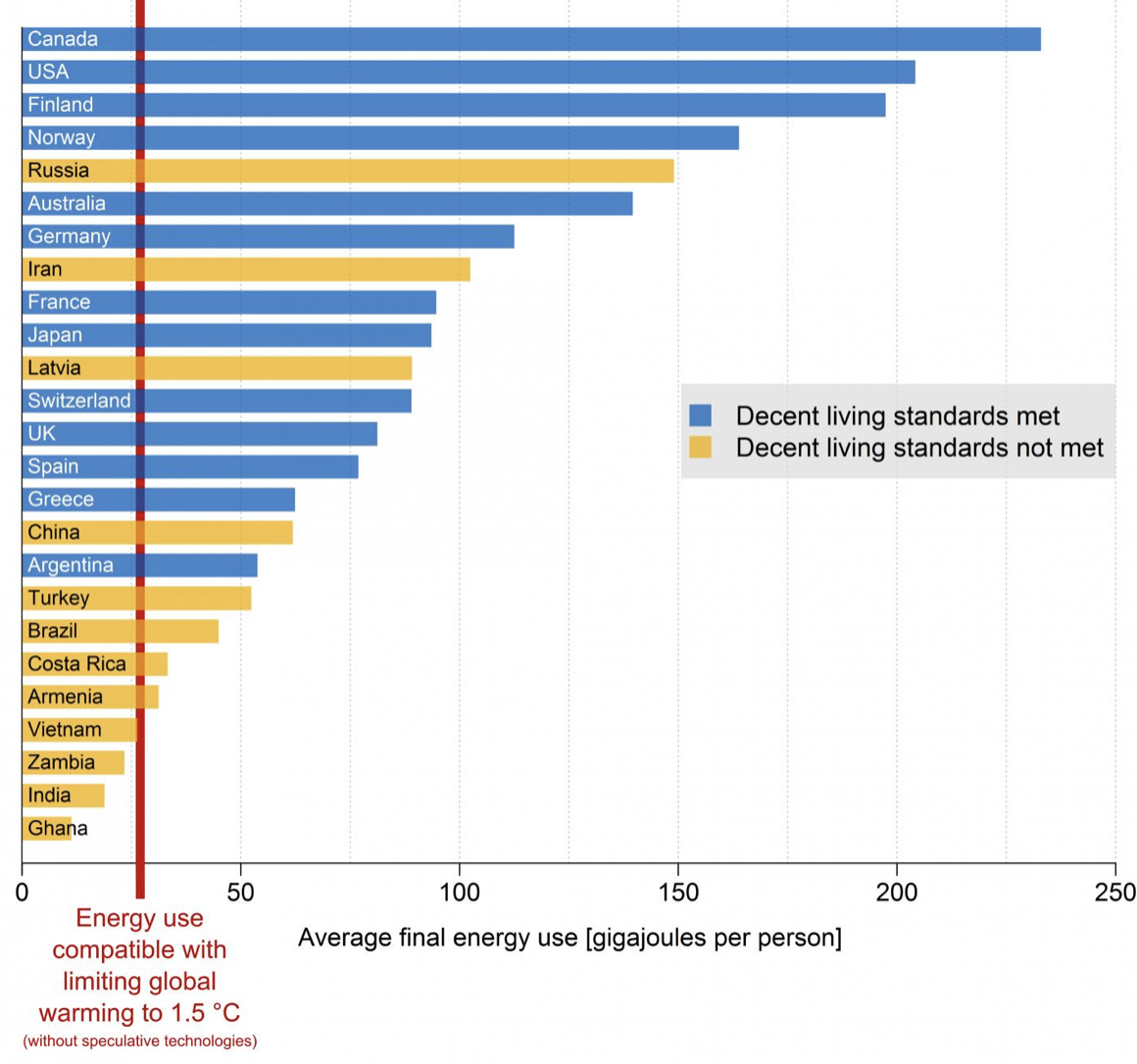 Graph showing that all countries where decent living standards are met for most of the population (blue bars) use much more energy per person than what is globally sustainable, defined as compatible with limiting global warming to 1.5 °C without relying on speculative technologies (red vertical line). On the other hand, in all countries with sustainable levels of energy use, parts of the population are deprived of decent living standards (yellow bars). (Graph credits: Vogel et al. (2021), the International Energy Agency (2018), Grubler et al. (2018), IPCC (2018)) Posted for media use

In our current economic system, the energy savings required to avert catastrophic climate change might undermine living standards; but the improvements in living standards required to end material poverty would need large increases in energy use, accelerating climate breakdown.

“The problem is that in our current economic system, all countries that achieve decent living standards use much more energy than what can be sustained if we are to avert dangerous climate breakdown,” Steinberger pointed out.

Steinberger was involved in a similar study published last October that found decent living standards could be provided to the entire global population of 10 billion that is expected to be reached by 2050, for less than 40 percent of today’s global energy. This level of global energy consumption is roughly the same as that during the 1960s, when the population was only three billion.

By 2050, global energy use needs to be as low as 27 gigajoules (GJ) of final energy per person to reach the aspirations of the Paris Agreement of limiting global warming to 1.5 °C without relying on speculative future technologies, according to the Intergovernmental Panel on Climate Change (IPCC).

But falling into this sustainable development dilemma is not inevitable – the research team shows that fundamental changes in economic and social priorities could resolve it.

“Our findings suggest that improving public services could enable countries to provide decent living standards at lower levels of energy use,” said co-author Dr. Daniel O’Neill, from Leeds’ School of Earth and Environment. “Governments should offer free and high-quality public services in areas such as health, education, and public transport.”

“We also need much higher taxes on high incomes, and lower taxes on low incomes,” he urged.

Another essential factor, the Leeds research team found, is affordable and reliable access to electricity and modern fuels. While this is already near-universal in affluent countries, it is still lacking for billions of people in lower-income countries, highlighting important infrastructure needs.

Perhaps the most crucial and perhaps the most surprising finding is that economic growth beyond moderate levels of affluence is detrimental for aspirations of sustainable development.

“In fact, economic growth in affluent or even moderately affluent countries is detrimental for living standards,” Steinberger said. “And it is also fundamentally unsustainable. Economic growth is tied to increases in energy use, and thus makes the energy savings that are required for tackling climate breakdown virtually impossible.”

“Another detrimental factor is the extraction of natural resources such as coal, oil, gas or minerals – these industries need to be scaled back rapidly,” she advised.

Vogel likes the idea of “degrowth,” a term used for both a political, economic, and social movement as well as a set of theories that critiques the paradigm of economic growth.

He advocates for “a broader, more fundamental transformation of our growth-dependent economic system. In my view,” he says, “the most promising and integral vision for the required transformation is the idea of degrowth – it is an idea whose time has come.”

Degrowth emphasizes the need to reduce global consumption and production and advocates a socially just and ecologically sustainable society with social and environmental well-being replacing Gross Domestic Product (GDP) as the indicator of prosperity.

The paper, “Socio-economic conditions for satisfying human needs at low energy use: an international analysis of social provisioning,” was published in Global Environmental Change on June 30, 2021.