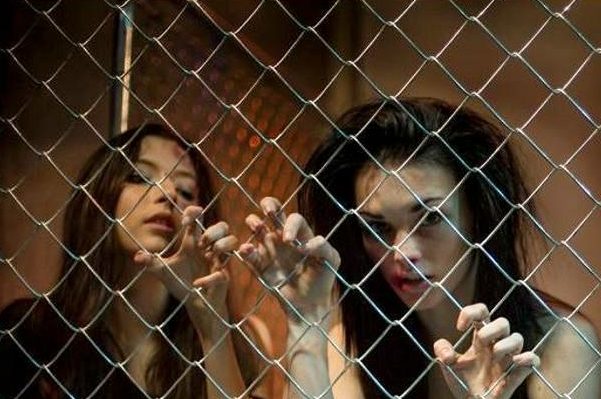 GENEVA, Switzerland, July 30, 2019 (Maximpact.com News) – “I was sold, exploited. My former recruiter contacted me to help her recruit new girls. I refused! I have been through hell and I do not wish it to anyone,” says Tate, a trafficking victim in Mauritania.

Particularly at risk are migrants working in sectors that are out of sight. They may work at sea or in private homes or in sectors of the economy that are not covered by labor laws.

Political support for safe and legal migration pathways is needed because migrants continue to be trafficked or otherwise exploited and abused during transit and upon arrival, the report concludes.

Prepared by Minderoo Foundation’s Walk Free initiative and the International Organization for Migration (IOM) for the Alliance 8.7 Action Group on Migration, the report, “Migrants and Their Vulnerability to Human Trafficking, Modern Slavery and Forced Labour,” provides recommendations on key steps governments can take to address this risk.

“In today’s global economy, the movement of people is inevitable, and we have to find ways to achieve migration safely and humanely,” said Fiona David, lead author of the report and research chair with the Minderoo Foundation, an NGO based in Nedlands, a suburb of the city of Perth, Western Australia.

“This report points to a number of practical steps that governments can take to increase protection of vulnerable migrants, such as ensuring national child protection laws apply to all children, including child migrants, closing gaps in labour laws in high risk sectors like domestic work, and prohibiting charging of recruitment fees,” David said. 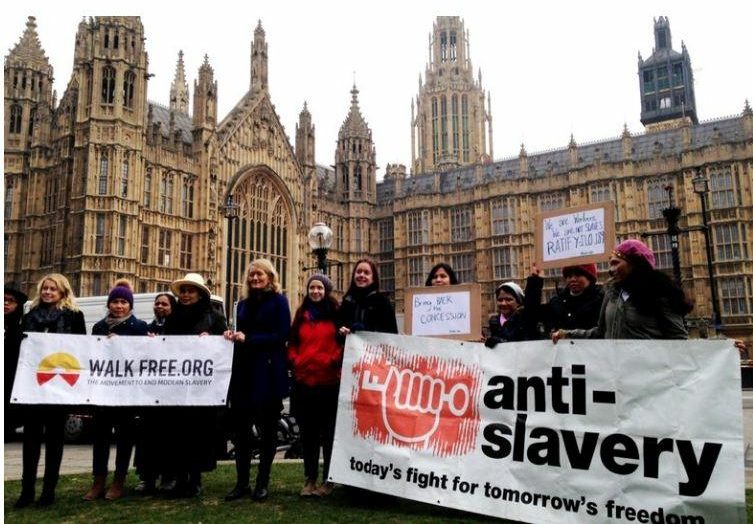 Two nongovernmental organizations, Walk Free and AntiSlavery, protest human trafficking in front of the British Parliament. Modern slavery still exists in Britain today, with up to 13,000 estimated to be victims, according to AntiSlavery. Date unknown (Photo courtesy AntiSlavery) Posted for media use.

Slavery in the 21st Century

“Modern slavery, while not defined in law, serves as an umbrella term that emphasizes the commonalities between human trafficking, forced labour and slavery,” the report states, explaining, “Essentially, these are all situations of exploitation in which a person cannot refuse or leave an exploitative situation due to threats, violence, coercion, deception or abuse of power.”

The UK’s system of “tied visas,” means that the right to be in the UK can be withdrawn by the employer. This system gives employers undue control over their workers’ living conditions and can prevent migrants from switching jobs without permission. These conditions can create an environment of dependence that can be readily exploited by unscrupulous employers, the report points out.

While there are national laws and policies intended to protect migrants from abuse, significant gaps in coverage and implementation leave large groups of people more vulnerable to abuse than others. These gaps are exploited by unscrupulous criminals for personal gain.

Child and adolescent migrants are particularly vulnerable to abuse, creating the need for governments to offer better protections, such as family reunification schemes, the report finds.

Female and male migrants both are vulnerable to abuse but in different ways. Women experience higher rates of modern slavery in domestic work, the sex industry and through forced marriage, while male migrants endure forced labor in the construction and manufacturing sectors.

There is an urgent need for national governments to recognize the close connection between the aims of achieving safe, orderly and responsible migration and preventing human trafficking, modern slavery, and forced labor. Governments need to close gaps in criminal and labor laws and to ensure vulnerable migrants are protected, the report urges.

“Without action to address the drivers of unsafe migration and to step up protection and assistance to migrants, many migrants will be trafficked and otherwise abused,” said Mathieu Luciano, who heads IOM’s Assistance to Vulnerable Migrants Unit in Geneva.

Migrant workers face great risk through policies in both sending and receiving countries. In many countries, recruiters are subject to little or no regulation, so they continue to charge migrants high fees, sometimes repayable at high interest rates, simply to connect them with available jobs.

Luciano said, “We need to do the hard work to create safe migration pathways that better reflect the realities of migration and labour markets, as well as balance the needs of national interests and migrant rights.” He cites the newly agreed Global Compact for Safe Orderly and Regular Migration as a roadmap for how to move forward.

Today, with 152 million child laborers and 40 million people in modern slavery worldwide, the Alliance 8.7 Action Group on Migration believes it has become imperative to accelerate efforts to achieve the Sustainable Development Goal Target 8.7.

This Target states, “Take immediate and effective measures to eradicate forced labour, end modern slavery and human trafficking and secure the prohibition and elimination of the worst forms of child labour, including recruitment and use of child soldiers, and by 2025 end child labour in all its forms.”

Alliance 8.7 is a global partnership for eradicating forced labor, modern slavery, human trafficking and child labor around the world. The International Labour Organisation (ILO) serves as the Secretariat of Alliance 8.7.

“At the current rate of progress, achieving SDG 8.7 by 2030 is impossible,” said Andrew Forrest, the Australian philanthropist and businessman who founded Walk Free.

On July 17, Walk Free released a report of its own showing that governments are already way behind in their commitment to eradicate modern slavery and achieve UN Sustainable Development Goal 8.7 by 2030.

The report, “Measurement, Action, Freedom” provides an independent assessment of 183 governments and their responses to the exploitation of the 40.3 million people in modern slavery.

“Based on best available estimates, we need to free some 10,000 people per day in order to eradicate modern slavery by 2030. This is a burden of government inaction. Global progress in tackling modern slavery has been hugely disappointing since the Sustainable Development Goals were agreed in 2015,” Forrest said.

The British government is putting its money on the table for this effort. Funding for the Alliance 8.7 Action Group on Migration was made possible through support provided by the UK government to accelerate Alliance 8.7’s work to eradicate forced and child labor, modern slavery and human trafficking.

“We know that 47 countries globally have not yet recognised human trafficking as a crime in line with international standards. Nearly 100 countries still fail to criminalise forced labour or, if they do, the penalty for this form of exploitation amounts to nothing more than a fine. Less than one third of countries protect women and girls from the terrible harm of forced marriage. This is not a situation that any of us should tolerate,” Forrest declared.

The UN measures progress towards the Sustainable Development Goals with a global framework of indicators and Voluntary National Reviews, where governments report on their own activities against these indicators.

For SDG 8.7, this approach is hampered by the lack of indicators on all forms of modern slavery. Without clear indicators to measure progress toward the 2030 goal, governments cannot report systematically and consistently, nor can they be held to account.

“Today, Walk Free joins with other leading anti-slavery organisations to call on UN member states to develop indicators to track progress towards the eradication of all forms of modern slavery under SDG 8.7,” Forrest said.