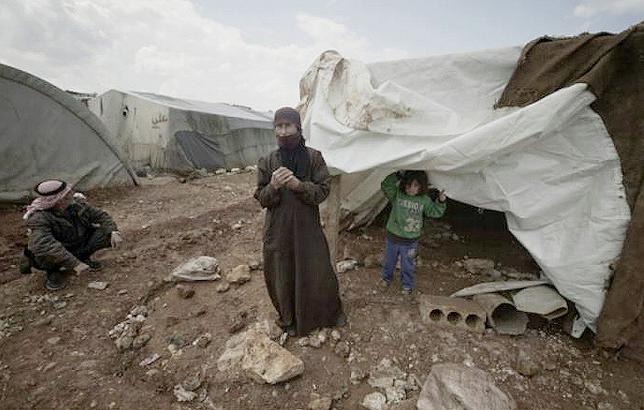 Tens of thousands of people were displaced by an air strike on the al-Shami hospital in the town of Ariha in Idlib, which had been supported by Islamic Relief and was providing care to more than 3,000 people every month. At least four children and six women were killed while more than 35 others were injured, including four nurses. February 12, 2020 (Photo courtesy Islamic Relief) Posted for media use.

ISTANBUL, Turkey, February 18, 2020 (Maximpact.com News) – Um Rami, 25, fled her hometown of Ma’rat al-Numan, Syria after attacks last week killed her husband. Along with many others from her home town, she has been forced to stay on the outskirts of a refugee camp in the mountains of northwest Syria along the Turkish border.

“I am petrified of the dark, my heart trembles whenever I hear any sound at night or I hear anyone passing by my tent,” she said. “I have very frightening thoughts. I need a tent, mattresses and blankets for my child and me so that I can live inside the camp, I am terrified here.”

The crisis in northwest Syria has reached a “horrifying new level,” the UN Humanitarian Affairs chief warned on Monday. Mark Lowcock said that since December 1, some 900,000 people in the region have been uprooted by violence. “They are traumatized and forced to sleep outside in freezing temperatures because camps are full.”

The mass displacement has coincided with bitter winter weather and families are sleeping in flooded fields with no running water or proper protection from the elements, burning clothes and trash to keep warm.

At least 60 percent of those displaced are children. “Mothers are burning plastic to keep children warm” and “babies and small children are dying because of the cold,” said Lowcock, who is also the UN emergency relief coordinator.

Those displaced are fleeing the fighting in Idlib Governorate, situated in northwestern Syria bordering Turkey. In 2011, the governorate was taken over by rebel militias in the context of the Syrian civil war, a conflict that has forced more than half the population to leave their homes.

In 2017, the governorate territory came under the nominal control of the Syrian Salvation Government, with Tahrir al-Sham, a group linked to the militant Islamist multi-national organization al-Qaeda, becoming the dominant militia in the region.

The governorate saw intense fighting in the 2019 Northwestern Syria offensive. In August 2019, the Syrian government announced a ceasefire shortly after UN Secretary-General António Guterres authorized an investigation, requested by a majority of the Security Council, into the Syrian and Russian bombing of hospitals and schools in Idlib. The terms paused the Assad regime’s offensive in exchange for a 20-kilometer (12.4-mile) withdrawal by rebel fighters.

The resulting humanitarian situation in Idlib is dire. Lowcock says a deadly vortex of proxy wars could lead to “the biggest humanitarian horror story of the 21st Century” unless “Security Council members, and those with influence, overcome individual interests and put a collective stake in humanity first.”

The Idlib region, along with parts of neighboring Aleppo province and the Latakia governate, is the last stronghold of the rebel and jihadist groups that have been trying to overthrow Syrian President Bashar al-Assad.

The region is home to some three million people, half of them already displaced from other parts of the country. The offensive that began late last year has caused the biggest single displacement of people since the conflict erupted following the repression of demonstrations demanding regime change.

“The violence in north-west Syria is indiscriminate,” Lowcock said. Humanitarian workers are being displaced and killed, while their equipment and facilities are being damaged.

Health facilities, schools, residential areas, mosques and markets are being hit with explosives, Lowcock said. Schools have been suspended and many health

facilities closed. Now there is a serious risk of disease outbreaks as basic infrastructure falls apart.

“We are now receiving reports that settlements for displaced people are being hit, resulting in deaths, injuries and further displacement,” Lowcock warned.

Although a huge relief operation, across the border from Turkey, is underway, he lamented that “it is overwhelmed.”

“The only option is a ceasefire,” Lowcock concluded.

But a ceasefire appears unlikely as last week another 142,000 people fled air strikes and troops advancing into Idlib province.

Now, snow, rain and sub-zero temperatures brought by Storm Ciara are deepening the hardships of hundreds of thousands of Syrians just displaced by the intense fighting. Footage and photographs posted on social media since last Tuesday show tents covered in snow in western Idlib.

Reuters reports that fleeing families are sleeping rough in streets and olive groves and burning toxic bundles of rubbish to stay warm in the bitterly cold winter weather. Relief workers say several children had died in the past week due to the freezing temperatures.

The groups said that camps for internally displaced people were hosting five times their intended capacity and rental prices in towns in the northwest have skyrocketed.

In one camp in northern Idlib, a family of four died of suffocation on Tuesday after inhaling fumes from a fire they had made with old clothing, shoes and cardboard.

Many local aid workers have themselves been displaced, making it difficult for them to respond to humanitarian needs that are “increasing exponentially,” said Ahmed Mahmoud, Syria country director for Islamic Relief. Mahmoud writes that 90 percent of his staff in the region have been forced to flee their homes and are battling to provide food and shelter to thousands of other displaced people.

There are now 1,150 camps for people who have been displaced across Idlib, but due to overcrowding, there is no space for many of the newly displaced.

Conditions inside these makeshift camps are appalling, says Mahmoud, with several families forced to share one tent and more people arriving every day. The tents are cold and often leak and there are mass shortages of food, water, fuel and no electricity which is desperately needed during the harsh Syrian winter.

Mahmoud said, “The humanitarian situation on the ground is terrible. Before the attacks, more than two-thirds of families in Idlib were food insecure, and now the needs have increased. Many aid organisations have been forced to stop operating in the region due to volatile security, which has created significant humanitarian need.”

“Our teams that remain on the ground are doing their best to provide whatever help they can,” Mahmoud said. “They have distributed mattresses, blankets, tents, food and clothes for children as well as heating equipment, but so much still needs to be done.”