Drier Than Dry, Dry to the Bone 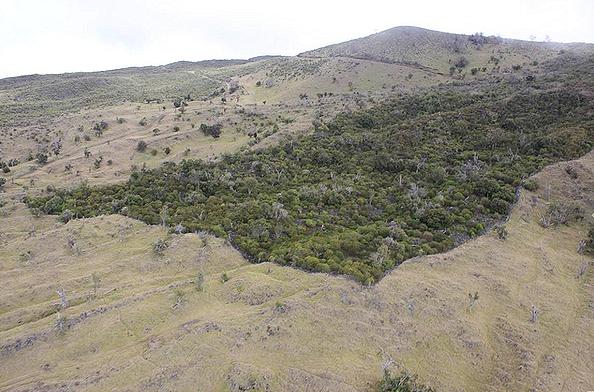 Aerial View of Auwahi Dryland Forest Restoration Project, Maui. Restoration of drylands is possible, as shown in this replanted forest on Maui, Hawaii, USA. Thanks to the volunteerism of the Maui community and contributions of landowner Ulupalakua Ranch, restored forest patches at Auwahi. These small forests on the leeward flanks of the Haleakala volcano, despite their size, now provide sanctuaries for native Hawaiian species found nowhere else in the world. June 17, 2010 (Photo by Arthur Medeiros, USGS) -Public domain.

ORDOS, Inner Mongolia, China, September 5, 2017 (Maximpact.com News)  – Conflict, drought, displacement and disease are driving vast humanitarian crises in dryland areas of Africa and the Middle East, just as governments that are Parties to the UN Conference to Combat Desertification meet this week and next in Ordos, Inner Mongolia, China.

Land degradation in drylands, known as desertification, could result in a 12 percent fall in global food production in the next 25 years. And it contributes to global carbon dioxide emissions, with about 60 percent of carbon in soils lost through land degradation, warns conference participant IUCN, the International Union for Conservation of Nature, as the 10-day conference gets underway in Ordos, a city of more than two million.

“Drylands secure food and water supplies for local people, mitigate climate change and reduce the impacts of disasters. Their soils, however, form slowly and are easily damaged,” says Andersen.

Scientists estimate that between 25 and 35 percent of drylands are being degraded right now, suffering diminished productivity. Over 250 million people are directly affected, and a further one billion in over 100 countries are at risk, statistics show.

Ordos itself must cope with desert conditions. The city is surrounded by a hilly area in the east, high plateaus in the west and center, sandy deserts in the north and south, and plains at the southern bank of the Yellow River.

During the 20th century, dryland habitats expanded by four to eight percent and now cover 40 percent of the globe’s terrestrial surface. As the global climate warms, this expansion of drylands will likely continue, say climate scientists.

Often, it is the children who suffer – and die.

Under current conditions, “nearly 20 million people are at risk of famine across Yemen, Somalia, South Sudan and northeast Nigeria, including some 1.4 million severely malnourished children at imminent risk of death,” calculates the UN Children’s Fund, UNICEF.

In Somalia, the humanitarian situation is rapidly deteriorating because of a severe drought that started in the north in 2016 and is now affecting most of the country, reports the UK Mission to the United Nations.

Other countries in the Horn of Africa have also been affected, especially Djibouti, Ethiopia and Kenya. In South Sudan, seasonal dry weather has reinforced competition for water among people and animals, causing already scarce water sources to be overused.

West Africa’s Lake Chad has lost some 90 percent of its water mass since 1963 due to climatic variability and population pressure, with devastating consequences on food security in the region.

And these crises now are spreading to surrounding countries.

With severe drought parching the Horn of Africa; more than one million South Sudanese refugees fleeing conflict are stretching capacity and resources in Uganda.

Displacement throughout the Lake Chad Basin resulting from conflict, climate change, environmental degradation and poverty is affecting millions of people and animals.

And this is happening in one of the most fragile and important of the world’s priceless areas.

In July 2000, Lake Chad was declared a Transboundary Ramsar Site of International Importance. Conservationists hope to create a network of national and regional conservation areas in the Chad Basin and set up institutions to manage them sustainably. To that end, the Chad Wetlands Initiative (CHADWET) was launched in June 2003, organized by The Ramsar Wetland Convention Bureau and its Mediterranean Coordination Unit.

But meanwhile, the human beings in the Lake Chad Basin are in crisis – not only a crisis of food insecurity but also of clean water, sanitation, disease prevention and treatment.

Water and sanitation are just as important as food for children and families facing famine and food insecurity, says UNICEF, which is fighting famine in these areas by providing safe water to more than 2.5 million people.

At the Risk of Their Lives

In conflict-affected areas of north-east Nigeria, UNICEF has worked with partners to reach around 845,000 people with safe water. Some of the most dedicated workers are in the water, sanitation and hygiene (WASH) offices.

“Staffers in many WASH offices are risking their lives to provide these essential services to people in need,” UNICEF says.

In Somalia, UNICEF says at least 1.66 million people have been given temporary access to safe water, and more than 890,000 have been given hygiene kits, critical to disease prevention.

It’s easy for diseases to spread in the drylands.

Drylands, including savannahs, mist forests and oases, cover 41 percent of all land on Earth. They are home to one-third of the world’s population and store 36 percent of all global terrestrial carbon.

Most of dryland biodiversity is found in the soil, which determines the overall fertility and productivity of the land.

“Species and ecosystems below and above ground are the engines of life in drylands, whose importance in sustaining billions of lives around the world is often underestimated,” says IUCN’s Andersen.

IUCN is urging countries to invest in conserving these ecosystems for the vital services they provide, and for the crucial role they play in achieving the Sustainable Development Goals, unanimously agreed by world governments.

Carbon dioxide moves constantly between land, oceans, vegetation and the atmosphere. When one of those absorbs more carbon dioxide than it releases, it’s considered a carbon sink, Poulter explains.

“La Nina-driven rainfall during 2010 and 2011, as well as the 30-year greening up of its deserts and other drylands contributed to significant changes across the globe,” he said.

Poulter and his collaborators have discovered surprising interactions between climate extremes and desert greening that increased in importance over the past 30 years. In this phase, dryland systems in the Southern Hemisphere, specifically Australia, had particularly high productivity in response to increased La Nina-phase rainfall.

But the large 2011 land carbon uptake is not expected to lead to long-term increases in ecosystem carbon dioxide (CO2) accumulation, the researchers warn. As the heat-trappiing blanket of carbon dioxide and other greenhouse gases thickens, drylands will become more degraded than ever.

IUCN calls for urgent investment in restoring and sustainably managing drylands as a high priority for achieving the Sustainable Development Goals, including the goals of combating climate change, reducing poverty, increasing food and water security, and boosting health and economic growth.

Some traditional crop farming and livestock production practices developed by dryland communities are helpful, such as minimizing tillage and planting trees alongside crops to maintain soil organic matter and moisture.

“These practices involve protecting biodiversity, including the bacteria, fungi and insects that live in the soil and which maintain nutrient and hydrological cycles,” said Davies. “Biodiversity is also vital for pollination which is a major factor in overall agricultural production.”

The IUCN estimates that by sustainably managing soils, food production could increase by up to 58 percent. Improved livestock production and rangeland management could sequester up to 2,000 million metric tons of carbon dioxide by 2030, which is more than the 2015 CO2 emissions of Russia.

IUCN urges countries to sustainably manage land by strengthening the rights of local communities and by facilitating finance opportunities for small and medium agribusinesses that engage in sustainable land management.

Projected global warming will likely decrease the extent of temperate drylands by a third over the rest of the 21st century, a situation made worse by an increase in dry deep soil conditions during the agricultural growing season, an international scientific collaboration led by the U.S. Geological Survey with members from seven countries has found.

Their study is presented in the journal “Nature Communications.”

These researchers predict a loss of 15 to 30 percent of temperate grasslands by the end of the century with a “substantial increase in deep soil drought conditions.”

Their results suggest that changes in precipitation and soil moisture associated with climate change will convert much of the area currently occupied by temperate grasslands and deserts to subtropical vegetation.

“The impacts can have large consequences for humanity,” they warn.

Until recently, uncertainty existed about the fate of temperate drylands. But this uncertainty is now disappearing because of improved supercomputer modelling of the movement of water through ecosystems, based on 20,000 locations around the world.

“I was impressed by the scope of the computer model, with many components of the water cycle calculated daily for 30 years, at 20,000 sites. All of this to simulate the current climate as well as 16 possible future climates. The variety of possible future climates gave pretty consistent outcomes, lending credibility to the results,” said Professor Scott Wilson, CIRC researcher and visiting researcher at Umeå University in Sweden.

Wilson explains that with the expansion of subtropical drylands as temperate drylands warm, cool season crops such as wheat and potato would no longer be economically viable.”

Wilson also warns of diseases driven to spread by the changing climate. “These subtropical drylands are home to aggressive diseases such as dengue and schistosomiasis. Given the predicted changes to dryland habitats globally, the outcome of this research is essential for developing strategies for adaptation by policy makers,” Wilson said.

All these issues and more will be on the table at the UN Conference to Combat Desertification, which runs from September 4 through September 15 in Ordos, Inner Mongolia, China.

The high-level segment of the conference is scheduled on September 11 and 12.

The observer status enables UNCCD representatives to attend GCF board meetings and to contribute better to the orientation of climate finance to achieve land degradation neutrality.