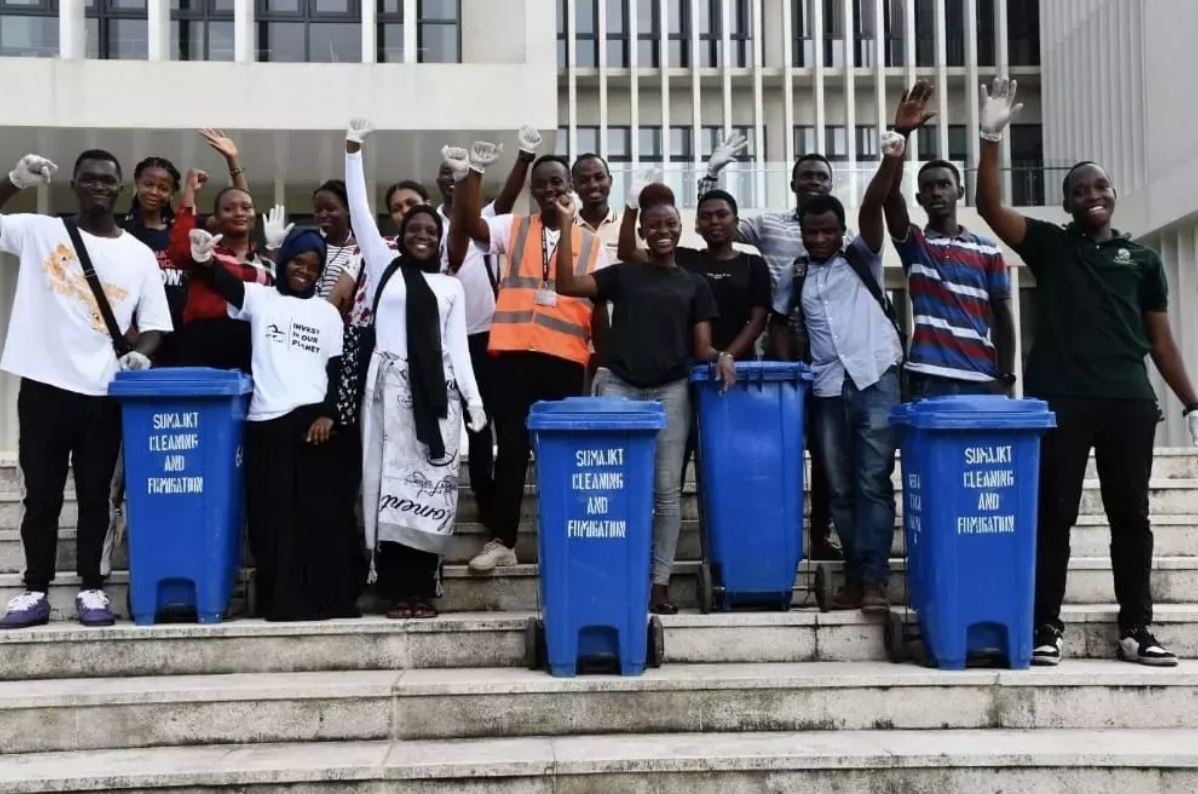 Inspired by the global Earth Day 2022 theme ‘Invest In Our Planet’, students at Tanzania’s oldest and premier public academic institution – the University of Dar es Salam – conducted a cleanup of the university’s ecological garden. April 12, 2022 (Photo courtesy EarthDay.org) Posted for media use

WASHINGTON, DC, April 20, 2022 (Maximpact.com News) – The environmental movement hasn’t always embraced the language of investment, although it may have depended on donations, which are a type of investment, too. But this year, the Earth Day theme is “Invest in Our Planet,” because, as the Earth Day organization puts it, “a green future is a prosperous future.”

“Change has never been easy but it takes just a committed effort from a few to create the tipping point necessary,” EarthDay.org President and CEO Kathleen Rogers believes. “The solutions are out there and we know what must be done whether it’s transitioning to renewable energy, conserving our forests and lands, or ridding ourselves of the scourge of plastic pollution.”

Reflecting her attitude, EarthDay.org says, “This is the moment to change it all – the business climate, the political climate, and how we take action on climate. Now is the time for the unstoppable courage to preserve and protect our health, our families, our livelihoods… together, we must Invest In Our Planet.”

This year, EarthDay.org is honoring Colombia’s Ministry of Environment and Sustainable Development as a “Lead Honorary Partner.” Rodolfo Ropo Beltran, EarthDay.org’s regional director-South America, said, “Their work in sustainability and their legislative actions for our environment and for climate change education are important and vital towards combating climate change.” 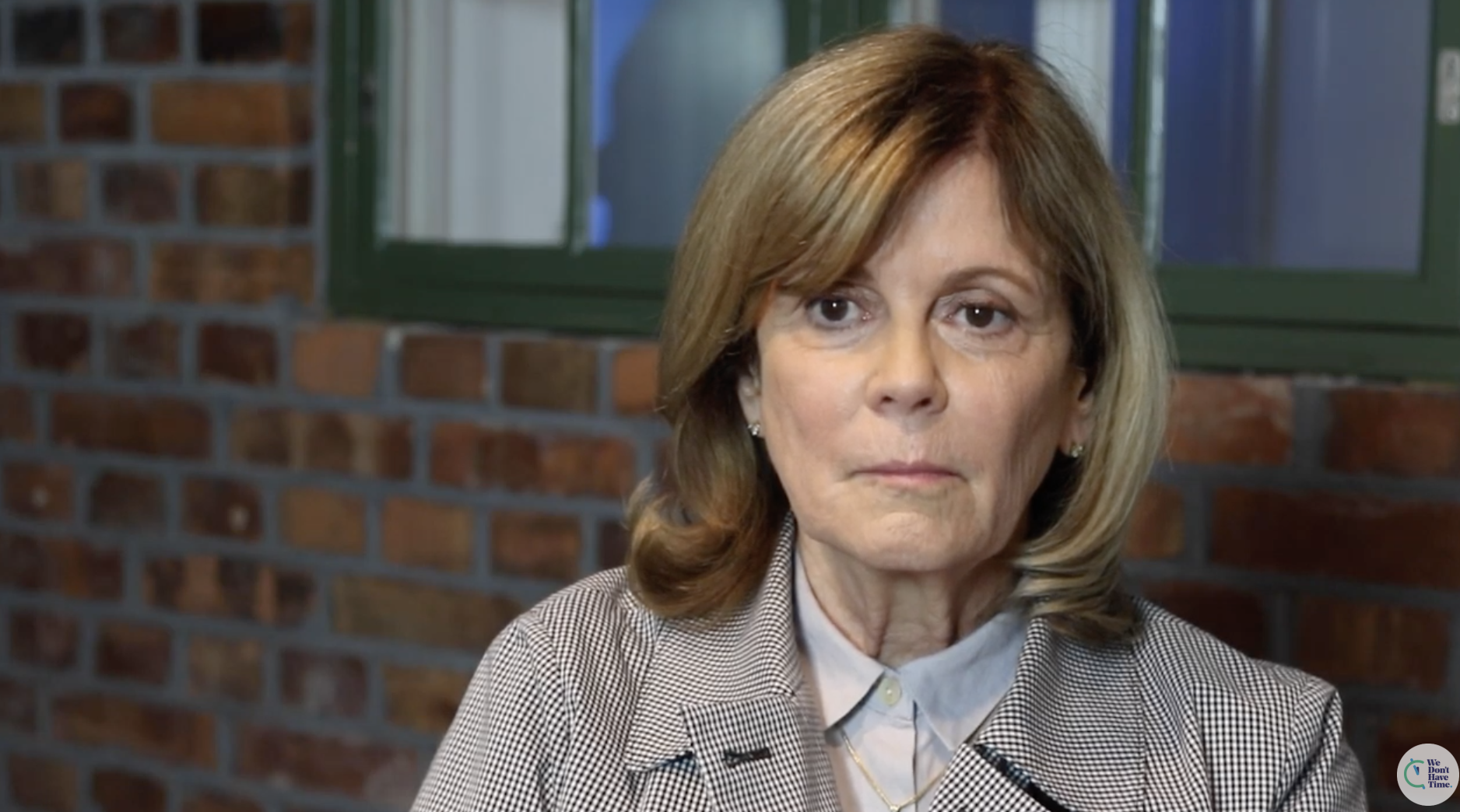 Kathleen Rogers, president of EarthDay.org, has worked for more than 20 years as an environmental attorney and advocate. April 22, 2019 (Screengrab from video by Klimatekot from We Don’t Have Time climate conference, April 22, 2019) Posted for media use

President Duque said, “Colombia is proud to launch Green Taxonomy in New York, a reference model for other emerging markets, hand in hand with the private sector in Latin America. At this time we are the fourth country in the world to have a Green Taxonomy, a kind of genetic code through which we are going to define all public policy determinations.”

Green Taxonomy is the gateway for companies, assets, fixed-income bonds and capital markets to benefit from green values for the private sector and the country in general.  The aim of the taxonomy is to prevent greenwashing and to help investors make greener choices.

President Duque was accompanied by Colombia’s Minister of Environment and Sustainable Development Carlos Eduardo Correa, who said, “With Green Taxonomy, we will be able to promote priority environmental projects for the country and it becomes the roadmap for companies and issuers of securities, local and foreign investors, financial regulators, public and private entities, and consumers.”

Among the environmental objectives that Colombia identified for its new Green Taxonomy program are mitigation and adaptation to climate change, conservation of ecosystems and biodiversity, water management, soil management, the circular economy and the prevention and control of pollution.

Naturally, donations of financial support make strong actions for the planet possible, but investments of time, talent and money are effective and welcome on Earth Day, celebrated on April 22 each year and every day of every year.

This year, media company Pique Action and EarthDay.org are investing together – partnering under the ‘Invest In Our Planet’ banner. EarthDay.org will share clips from Pique Action’s micro-documentary series highlighting different climate challenges and how innovative organizations are working to solve them.

“As a part of our 2022 Earth Day theme, Invest In Our Planet, we are excited to work with Pique Action to showcase some incredible innovators working around the world to create critical solutions to combat humanity’s greatest threat,” said Tom Cosgrove, chief creative and content officer, EarthDay.org.

The micro-films cover a wide range of solutions, from reusing EV batteries, to decarbonizing cement and producing fertilizer with renewable energy.

Pique stories include profiles on gamechanging startups such as the geothermal heating firm Dandelion Energy, 75F’s smart sensors and building energy controls, Remora, makers of a device that captures most of a semi-truck’s CO2 emissions from the tailpipe, and CarbonCure, which injects captured CO2 into concrete. This makes the concrete stronger, optimizing the mix while eliminating the CO2.

“We must come together and focus on what we can do to solve the climate crisis. The moment has not passed nor is it ahead of us,” adds Kip Pastor, founder and CEO of Pique Action. “It is right now. Earth Day is the time to highlight the innovators and support them however we can. Earth Day is the event and EarthDay.org is the organization. We’re thrilled to be a part of it and share the cinematic stories of the doers to inspire, ally, and focus us on the task at hand.”

People can invest their time this year in some of the classic ways. EarthDay.org is again hosting The Great Global Cleanup®, a worldwide campaign to remove billions of pieces of trash from neighborhoods, beaches, rivers, lakes, trails, and parks – reducing waste and plastic pollution, improving habitats, and preventing harm to wildlife and humans.

Many people celebrate Earth Day all during the month of April, turning it into Earth Month.

For instance, students at Tanzania’s oldest public academic institution, the University of Dar es Salam, conducted a cleanup of the university’s ecological garden on April 9 to mark “Earth Month April” and to “widen awareness about the need to reduce our use of plastic and instead switch to biodegradable alternatives.”

The students are inspired by the global Earth Day 2022 theme Invest In Our Planet said Zuhura Ahmad of EarthDay.org. A biologist, chemist, teacher and co-founder of Youth Biodiversity Tanzania, Ahmad is concerned about the amount of plastic the students found in the university ecological garden.

“The students cleared approximately 50 kilograms of litter that was affecting the garden,” she said. “Of this, 60% turned out to be plastic. This is very worrying as items such as PET bottles and single-use bags that mostly comprised the waste collected are non-biodegradable and could continue to remain on the planet for hundreds of years.”

At the cleanup, the University of Dar es Salam students were enthusiastic, pledging, “We commit ourselves to Invest In Our Planet and to carry out even more cleanups.”

In the United States last Earth Day, the organization Keep the Tennessee River Beautiful partnered with Jacksonville State Historic Park to complete three cleanups. They are proud that with only 25 volunteers they still managed to remove over 9,000 pounds of waste from the river – more than 360 pounds per volunteer.

Kathleen Gibi, executive director of Keep the Tennessee River Beautiful, said, “That’s how the change for our river will happen: through local partners and individuals who are eager about taking ownership to protect and improve their beautiful river community. It’s been truly inspiring for us to see these change makers take action.”

This statement holds true for all parks, rivers, beaches and community areas, says Gibi. Real change is made by dedicated community members willing to take on the ever-growing pollution problem. “For us to make global change, we must have local action.”

To find a cleanup, register a new one, or learn more about The Great Global Cleanup, please visit: https://www.earthday.org/campaign/cleanup/

This year, EarthDay.org wants everyone to invest in the planet. That could mean buying stock in sustainable companies, but the EarthDay organizers emphasize that investing is really everybody investing their unique contributions to planetary health – governments, industries, corporations, and individuals – consumers, citizens, and community members.

EarthDay leader Kathleen Rogers puts it this way, “Everything has to be reinvented in a world of shrinking resources. So why not teach it? Why not embrace it? Why not say we’re going to the moon?”