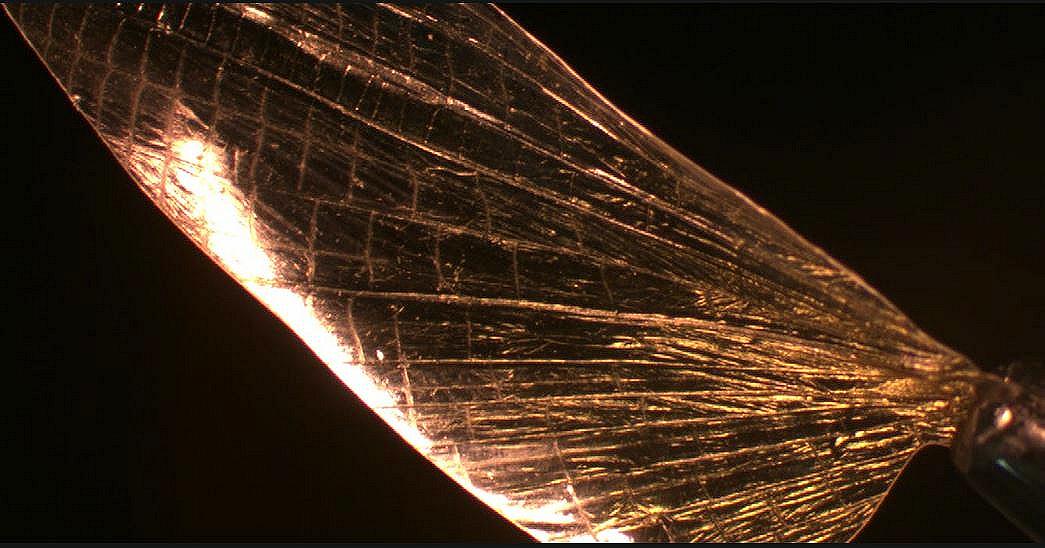 Shrilk, a biodegrable plastic made from silk and shrimp shells, is similar in strength and toughness to an aluminum alloy, but only half the weight. (Photo courtesy Wyss Institute) Posted for media use

PHILADELPHIA, Pennsylvania, June 22, 2017 (Maximpact.com News) – As all grocery shoppers know, many meats, breads, cheeses, cakes and cookies come wrapped in plastic packaging to prevent spoilage. But plastic films are not great at keeping foods fresh, and some plastics are known to leach harmful compounds into the food they’re supposed to protect. High-fat foods such as cheese are particularly vulnerable.

Under pressure from environmental and health groups, in 2016 the U.S. Food and Drug Administration banned three grease-resistant chemical substances linked to cancer and birth defects from use in pizza boxes, microwave popcorn bags, sandwich wrappers and other food packaging.

But Environmental Working Group President Ken Cook points out that the ban does nothing to prevent food processors and packagers from using almost 100 related chemicals that may also be hazardous. Although the three chemicals were no longer made in the United States as of 2011, the possibility remains that food packaging with those chemicals made in other countries could be imported to America.

To address these issues, scientists are now developing edible packaging for food made with food products or byproducts.

Researchers at the Wyss Institute for Biologically Inspired Engineering at Harvard University  have developed a new material that replicates the exceptional strength, toughness, and versatility of one of nature’s more extraordinary substances – shrimp shells.

Low-cost, biodegradable, and biocompatible, the material is composed of fibroin protein from silk and from chitin, extracted from discarded shrimp shells. It poses no threat to trees or competition with the food supply.

Shrilk is similar in strength and toughness to an aluminum alloy, but it is only half the weight. By controlling the water content in the fabrication process, the researchers were able to produce wide variations in stiffness, from elasticity to rigidity.

As a cheap, environmentally safe alternative to plastic, Shrilk can be used to make trash bags, packaging, and diapers that degrade quickly.

“When we talk about the Wyss Institute’s mission to create bioinspired materials and products, Shrilk is an example of what we have in mind,” said the institute’s Founding Director Donald Ingber, M.D., Ph.D., who led the work that created Shrilk. “It has the potential to be both a solution to some of today’s most critical environmental problems and a stepping stone toward significant medical advances.”

In Pennsylvania, U.S. government scientists have developed an edible packaging film made from milk proteins.

A scientist with the U.S. Agricultural Research Service has a patent for her method of turning a milk 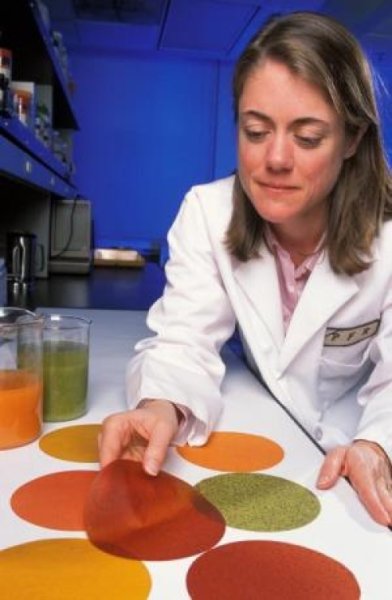 protein into water-resistant films that can be used to coat or package foods.

The new extraction method removes the protein, called casein (say kay-seen), from milk by using carbon dioxide under high pressure. Casein, which solidifies when milk is acidified, is the main ingredient in cheese. It is used as a food supplement and as an ingredient in nonfood products including adhesives, finishing materials for paper and textiles, and paints.

“The protein-based films are powerful oxygen blockers that help prevent food spoilage. When used in packaging, they could prevent food waste during distribution along the food chain,” says Tomasula.

The new material remains intact when exposed to water, unlike water-soluble, protein-based films patented in the past. Tomasula says packaging films made from milk proteins are excellent oxygen barriers, up to 500 times better than low-density polyethylene, and completely food-safe.

In their presentation to the American Chemical Society meeting in 2016, Tomasula and her colleagues said the milk protein-based films repel grease, can be eaten with the food product, and dissolve easily in hot or cold water.

For these reasons, Tomasula said, “Milk-based films are ideal candidates to coat convenience food packaging; layer between synthetic films to block oxygen; coat foods to preserve them and carry additional nutrients; or, form increasingly-popular single-serve pouches, which can be either eaten or dissolved, generating zero waste.”

Flavorings, vitamins or minerals could be added to the edible coating to enhance the flavor and reinforce nutrition.

This casein coating could be sprayed onto food, such as cereal flakes or bars. Right now, cereals keep their crunch in milk due to a sugar coating. Instead of all that sugar, manufacturers could spray on casein-protein coatings to prevent soggy cereal.

The spray also could line pizza or other food boxes to keep the grease from staining the packaging, or to serve as a lamination step for paper or cardboard food boxes or plastic pouches.

The ARS research group is currently creating prototype film samples for a small company in Texas, and the development has attracted interest among other companies. This casein packaging could be on store shelves within three years.

Another USDA team, working with scientists from the University of Lleida in Spain, has improved upon an edible coating for fresh fruits and vegetables by enabling it to kill deadly E. coli bacteria while also providing a flavor-boost to food.

Composed of apple puree and oregano oil, which acts as a natural antibacterial agent, the coating shows promise in laboratory studies of becoming a long-lasting, potent alternative to conventional produce washes.

“All produce-cleaning methods help to some degree, but our new coatings and films may provide a more concentrated, longer-lasting method for killing bacteria,” says research leader Tara McHugh, Ph.D., a food chemist with the ARS Albany, California. As the films are made of fruit or vegetable puree, they also provide added health benefits such as vitamins, minerals and antioxidants, she says.

Besides apple puree, the antimicrobial films can also be made from broccoli, tomato, carrot, mango, peach, pear and other produce items. Non-antimicrobial versions of these food wraps are now being made commercially by California-based Origami Foods®  in cooperation with the USDA for use in a small but growing number of food applications, such as sushi wraps.

Manufacturers of foods packaged in glass bottles no longer have to ship their products in plastic foam. A Green Island, New York company by the name of Ecovative is making packaging made from mycelium, the root structure of mushrooms.

Ecovative’s packaging made for shipping bottles of products, such as wine or maple syrup, is grown from mycelium, the root structure of mushrooms. The custom molded protective packaging called Mushroom® Packaging is home-compostable and sustainable.

The packaging is price competitive with most fabricated plastic foams and the company even has a Grow It Yourself Mushroom Material program to encourage open innovation.

Ecovative founder Eben Bayer blogged, “We spent a lot of time and effort conforming our natural products to existing expectations of materials to prove that we can grow natural products capable of displacing their toxic counterparts.”

“The uniform white mycelium aesthetic associated with Ecovative is a finish that naturally mimics the expanded polystyrene products that fill our landfills every day,” he wrote.

“We are committed to working with industry and consumers to rid the world of toxic, unsustainable materials,” says Bayer. “We believe in creating products that enable companies and individuals to achieve their sustainability goals, without having to sacrifice on cost or performance.”