NEW YORK, New York, September 14, 2017 (Maximpact.com News) – Regions, cities, towns, localities – this is where people live and as local people they want their voices heard not only locally, but nationally and around the world. Now, they are making new strides towards recognition and power by implementing the New Urban Agenda.

Ani Dasupta, global director, WRI Ross Center for Sustainable Cities, said then, “The world took a step forward today in its journey to create cities where all can live, move and thrive. Tens of thousands of people—leaders, citizens, community organizers, business women and men, youth and urban planning experts—came together here in Quito to recognize that sustainable, livable cities for all are not only a moral imperative, but also a scientific one.”

Adopted by a resolution of the UN General Assembly in December 2016, the New Urban Agenda is aimed at “readdressing the way cities and human settlements are planned, designed, financed, developed, governed and managed…”

The Resolution of adoption reads, “While the specific circumstances of cities of all sizes, towns and villages vary, we affirm that the New Urban Agenda is universal in scope, participatory and people-centred, protects the planet and has a long-term vision, setting out priorities and actions at the global, regional, national, subnational and local levels that

Governments and other relevant stakeholders in every country can adopt based on their needs.”

Rethinking the way we build, manage, and live in cities is center stage as the UN General Assembly embarks on its 72nd session, which opened September 12. 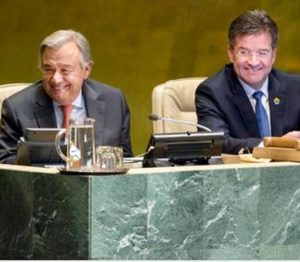 Miroslav Lajčák (right), president of the seventy-second session of the General Assembly, with Secretary-General António Guterres during the opening meeting of the session. September 12, 2017 United Nations, New York (UN photo by Kim Haughton) Posted for media use

“The UN was created for people,” Miroslav Lajčák of Slovakia said in his first address as President of the General Assembly. “The people who need the UN the most are not sitting in this hall today. They are not involved in the negotiation of resolutions. They do not take the floor at high-level events. It is one of the tasks of the General Assembly to make sure that their voices can still be heard.”

UN Secretary-General António Guterres also emphasized the importance of focusing on people in the UN’s work.

“People around the world are rightly demanding change and looking for governments and institutions to deliver,” he said. “We all agree that the United Nations must do even more to adapt and deliver. That is the aim of the reform proposals that this Assembly will consider.”

Guterres said that one key change within and beyond the UN must be the empowerment of women and girls around the world, an important part of the New Urban Agenda.

As part of the reforms planned for the coming year, the effectiveness of UN-Habitat, the UN agency for human settlements and sustainable urban development, is under scrutiny.

To that end, mayors, local and regional leaders and representatives of the Global Taskforce of Local and Regional Governments took part in the high-level meeting on September 5-6 in New York, convened by then President of the UN General Assembly Peter Thomson of Fiji on the New Urban Agenda.

The meeting was called to discuss the report of the Independent Panel to Assess, Enhance Effectiveness of UN-Habitat after the Adoption of the New Urban Agenda. And then, to try to map out the next steps towards achievement of that agenda.

The panel’s report calls for a formal role for a Local Government Committee in a renewed UN Habitat governance structure. It acknowledges that, to date, the UN system has failed to recognize the “fundamental role” played by local governments in urban development.

The eight-member panel includes Paris Mayor Anne Hidalgo, and, in the role of co-chair, the new United Cities and Local Governments (UCLG) President Parks Tau, who was the mayor of the city of Johannesburg, South Africa from 2011-2016.

Presenting the panel’s report in the High Level Meeting, Tau told the conference, “The challenges are so great that there needs to be total change in the way we approach development and we will need to include a greater number of actors.”

“Our report makes a clear case for universality and for taking the involvement of non-state actors and local governments to a different level,” Tau said.

Panel Co-Chair and Mexico’s Secretary of Agrarian, Territorial and Urban Development Rosario Robles, said, “By its very nature the New Urban Agenda is a territorial agenda, an agenda that deals with towns, cities and their rural surroundings. It therefore cannot be achieved without the active commitment and participation of local and regional governments who are in direct contract with territories.”

The local leaders met with UN Secretary-General António Guterres to emphasize the contributions of local and regional governments to the overall UN sustainable development agenda.

Guterres expressed appreciation for the support of local and regional governments and his will for the United Nations to explore new ways of collaboration with this constituency to achieve the successful implementation of the New Urban Agenda.

What is it then, this New Urban Agenda?

The problems are many. By 2050, the world’s urban population is expected to nearly double, making urbanization one of the 21st century’s most transformative trends.

And in our cities massive sustainability challenges arise when needs for housing, infrastructure, basic services, food security, health, education, decent jobs, safety and natural resources must be met for the millions of new urban residents.

The General Assembly hopes the ambitious new agenda will make life better for all city residents.

The UN Resolution of adoption reads, “The New Urban Agenda will help to end poverty and hunger in all its forms and dimensions; reduce inequalities; promote sustained, inclusive and sustainable economic growth; achieve gender equality and the empowerment of all women and girls in order to fully harness their vital contribution to sustainable development; improve human health and wellbeing; foster resilience; and protect the environment.”

The New Urban Agenda “recognizes that culture should be taken into account in the promotion and implementation of new sustainable consumption and production patterns that contribute to the responsible use of resources and address the adverse impact of climate change.”

Throughout the world, organizations that represent cities and regions are already moving toward the concepts embodied in the New Urban Agenda, dealing with climate change as a priority.

Cities already account for more than 70 percent of global energy-related greenhouse gas emissions. With urbanization on the rise, at least 66 percent of the world’s population is expected to live in cities by 2050, making cities the potential epicenters of climate solutions.

Plans are now underway for phasing out greenhouse gas emissions in cities with local solutions to limit climate change.

Japanese local and regional governments released the Nagano Declaration September 8 at the Local Renewables Conference 2017 in Nagano, Japan in support of a future in which Japanese cities and regions are fully powered by renewable energy.

With some 500 participants from across Japan and elsewhere, the Local Renewables Conference 2017 offered a stage for local and regional governments, energy service providers, business reps and experts to plan the switch from imported, fossil-fuel energy sources to local renewable energy resources.

This conference was a special edition of the Local Renewables Conference Series initiated and organized biannually in Europe by ICLEI – Local Governments for Sustainability, and the City of Freiburg, Germany. This one was hosted by Japan’s Ministry of the Environment, Nagano Prefecture and ICLEI.

Last December, the newly created Global Covenant of Mayors for Climate & Energy was introduced during the C40 Cities Mayors Summit in Mexico City.

“The leadership of cities is more important than ever in the fight against climate change,” said Michael Bloomberg, three-term mayor of New York City, the UN Secretary-General’s Special Envoy for Cities and Climate Change and Co-Chair of the new Global Covenant of Mayors.

“This group’s diverse experience from cities on every continent will help support local action and speed global progress,” Bloomberg said.

Maroš Šefčovič of Slovakia, a vice president of the European Commission and co-chair of the Global Covenant of Mayors for Climate & Energy, said, “Bringing together the EU Covenant of Mayors with the Compact of Mayors was a step forward for both coalitions, as it allowed us to expand our global reach to mobilize and galvanize local leadership in every corner of the world.”

Writing on the International Institute for Environment and Development website, Katharina Neureiter said September 7, “It’s 10 years since the term ‘impact investing’ was coined to reflect investments that bring about social and environmental benefits alongside financial returns. Since then, the impact investing sector has grown to US$77 billion.”

Examining the pros and cons of investing in underserved localities, Neureiter writes, “Engaging with residents could solve many problems. Locals can help prospective investors understand land use patterns. If residents see the benefits of an investment in their area they might be prepared to mediate between developers and local governments, clarify land access, and use their relationships to advocate on behalf of the investor.”