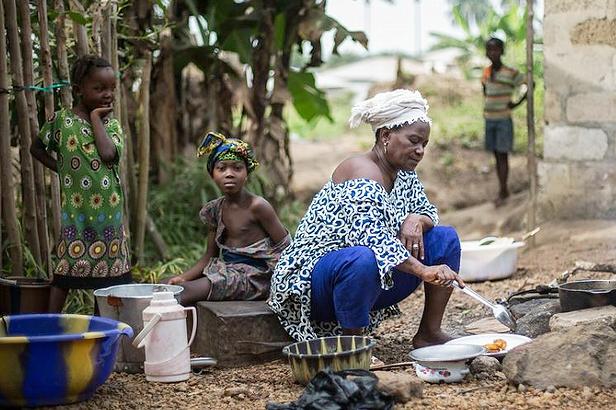 Hanna, a founding member and activist of MALOA (Malen Land Owners and Users Association) is preparing dinner in the kitchen of her home in Sahn Malen, Sierra Leone, West Africa, where there is no electricity or running water. December 12,2015 (Photo by FIANBelgium) Creative Commons license via Flickr

PORTLAND, Oregon, July 25, 2019 (Maximpact.com News) – Efforts to shift away from fossil fuels and replace oil and coal with renewable energy sources can help reduce carbon emissions but they do so at the expense of increased inequality, according to new research from Portland State University (PSI).

In a study of 175 nations from 1990 to 2014, Julius McGee, assistant professor of sociology in PSU’s College of Liberal Arts and Sciences, and his co-author, Patrick Greiner, an assistant professor of sociology at Vanderbilt University, found that renewable energy consumption reduces carbon emissions more effectively when it occurs in a context of increasing inequality.

Conversely, it reduces emissions to a lesser degree when occurring in a context of decreasing inequality.

Energy poverty is when a household has no access or inadequate access to energy services such as heating, cooling, lighting, and use of appliances due to a combination of factors: low income, increasing utility rates, and inefficient buildings and appliances.

McGee said that in nations like the United States where fossil fuel energy such as natural gas is substituted for renewable energy as a way to reduce carbon emissions, it comes at the cost of increased inequality.

That’s because the shift to renewable energy is done through incentives such as tax subsidies. This reduces energy costs for homeowners who can afford to install solar panels or energy-efficient appliances, but it also serves to drive up the prices of fossil fuel energy as utility companies seek to recapture losses.

That means increased utility bills for the rest of the customers, and for many low-income families, and increased financial pressure, which creates energy poverty.

“People who are just making ends meet and can barely afford their energy bills will make a choice between food and their energy,” McGee said. “We don’t think of energy as a human right when it actually is. The things that consume the most energy in your household – heating, cooling, refrigeration – are the things you absolutely need.”

Alternatively, in poorer nations, renewable sources of electricity have been used to alleviate energy poverty. In rural areas in southeast Asia and sub-Saharan Africa, a solar farm can give an agrarian community access to electricity that historically never had access to energy, McGee said.

“That’s not having any impact on carbon dioxide emissions because those rural communities never used fossil fuels in the first place,” he said.

The study recommends that policymakers consider implementing policy tools that are aimed at both reducing inequality and reducing emissions.

McGee and Greiner said such policies would both incentivize the implementation of renewable energy resources, while also protecting the populations that are most vulnerable to energy poverty.

“We really need to think more holistically about how we address renewable energy,” McGee said. “We need to be focusing on addressing concerns around housing and energy poverty before we actually think about addressing climate change within the confines of a consumer sovereignty model.”

Almost 50 million people in the European Union are affected by energy poverty.

The European Commission addressed the concept of energy poverty for the first time in 2009, with the publication of two law that instructed Member States to develop national action plans or other appropriate frameworks to tackle energy poverty.

The increasing costs of energy, combined with a stagnation in average household income has led to an increase in household energy expenditure, particularly among the most vulnerable people with lower incomes, according to new research by Portuguese scientists João Pedro Gouveia, Pedro Palma, and Sofia Simoes of the Center for Environmental and Sustainability Research, NOVA School of Science and Technology, NOVA University in Lisbon, Portugal.

Since then, there has been a strong imperative to properly define and measure energy poverty in the European Union, as also reflected in the European Commission’s 2016 legislative proposal “Clean Energy for All Europeans.”

Over the years, several energy poverty definitions have been developed by projects, institutions and countries: the UK, France, England, Scotland, Slovakia, and Ireland.

Policies addressing energy poverty and protecting vulnerable consumers are beginning to be introduced throughout the EU, mostly in an unorganized manner conducted individually by each Member State, either from a social perspective or through the energy sector.

Despite the elevated attention energy poverty is increasingly receiving in research and in the EU and national policies’ arena, around 50 million people in the EU are estimated to be experiencing energy poverty, with evidence showing that different regions present individually their own energy poverty inflected characteristics, write Gouveia, Palma and Simoes.

These scientists have assembled an Energy Poverty Vulnerability Index (EPVI) as a multidimensional tool to identify hotspots for local action.

Energy poverty is not fully explained by income levels and other socioeconomic conditions, they write, and it is certainly related to infrastructure such as buildings and climatization systems. The EPVI can be used to identify both energy and social policy mechanisms that could alleviate the problem.

The identified solutions should address energy efficiency in buildings and energy affordability and be supported and leveraged by social incentives and subsidies established by governance institutions, preferably at the local or municipal levels, write the Portuguese researchers.

Examples include energy efficiency interventions aiming to decrease buildings’ energy demand while assuring thermal comfort conditions. This can be achieved through passive measures ranging from no-cost energy consumption reduction behaviors, such as natural ventilation optimization and proper use of shading device, to more costly measures like the installation of double glazing, and external insulation, intrinsically improving the buildings’ energy performance.

Active measures like the purchase and use of more efficient space heating and cooling equipment such as heat pumps are also relevant for meeting increasing levels of thermal comfort but with energy consumption reduction.

Investment in decentralized renewable energy technologies can also play a role in counteracting the high costs of electricity, particularly individual or neighborhood scale technologies that might integrate local electricity grids, increasing the independence of local producers and consumers. 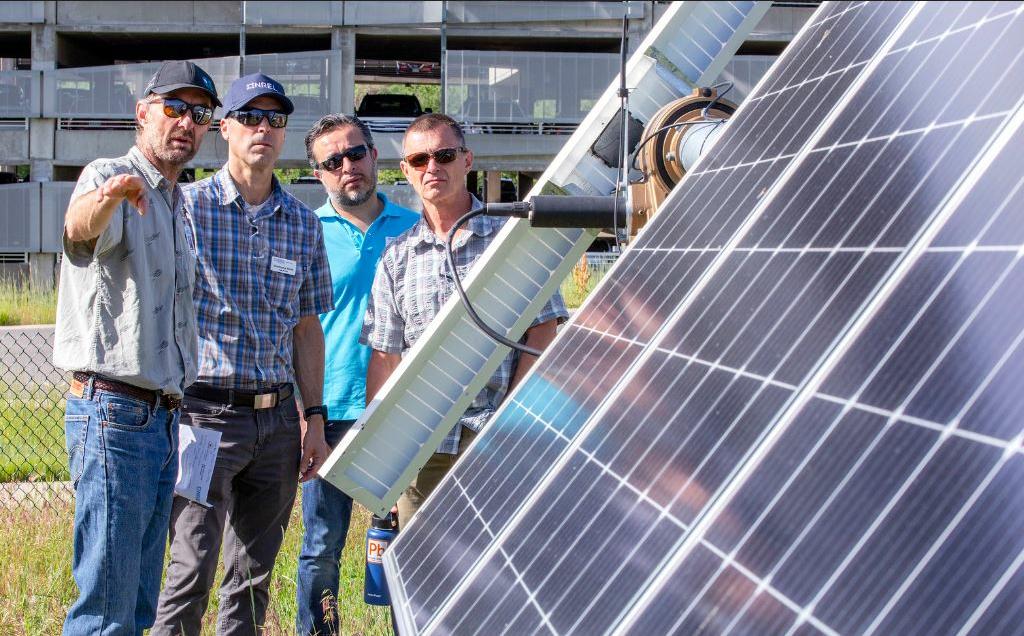 In 2017 following a decade of steady progress, the International Energy Agency (IEA) said that the global electrification rate reached 89 percent and 153 million people gained access to electricity each year.

The biggest challenge remains in the most remote areas globally and in sub-Saharan Africa where 573 million people still live in the dark. To connect the poorest and hardest to reach households, off-grid solutions, including solar lighting, solar home systems, and increasingly mini grids, will be crucial, said the IEA.

The world is falling short of meeting the global energy targets set in the United Nations Sustainable Development Goals (SDG) for 2030, despite significant progress in recent years, finds a report issued in May produced by the International Energy Agency (IEA), the International Renewable Energy Agency (IRENA), the United Nations Statistics Division (UNSD), the World Bank and the World Health Organization (WHO).

Notable progress has been made on energy access in recent years, with the number of people living without electricity dropping to roughly 840 million from one billion in 2016 and 1.2 billion in 2010, the report shows.

India, Bangladesh, Kenya and Myanmar are among countries that made the most progress since 2010. However, without more sustained and stepped-up actions, 650 million people will still be left without access to electricity in 2030. Nine out of 10 of them will be living in sub-Saharan Africa.

Ensuring affordable, reliable, sustainable and modern energy for all by 2030 remains possible, the report assures, but that will require more sustained efforts, particularly to reach some of the world’s poorest populations and to improve energy sustainability.

Riccardo Puliti, senior director for Energy and Extractives at the World Bank, said, “The progress we have seen over the last few years is encouraging – the number of people without access to electricity has dropped to 840 million – but we still have a great deal of work to do as much of this population lives in the poorest countries and most remote locations.”

“Over the last five years the World Bank has committed US$5 billion to access programs, whether it is on- or off-grid, and we will continue to scale up. The successes in several countries in Africa and Asia show the way,” said Puliti. “This report demonstrates the importance of sound planning, integrating grid and off-grid approaches, a focus on affordability and reliability, and addressing gender inequalities.”

Featured Image: Through the creation of solar powered micro-grids, the Maasai of the Moduli district in northern Tanzania are receiving power in their mud huts. The solar power is providing life-saving water purification, a shared refrigerator for food and medicines, a computer for the community, and lights for the cow and goat corrals to frighten away hyenas. 2015 (Photo courtesy USAID) Public domain.