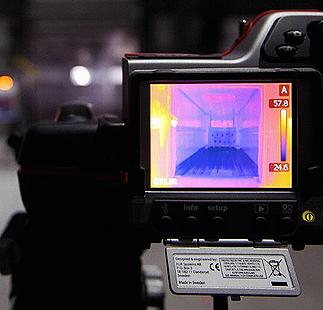 Caption: Thermal image of heat in the Balzac Fresh Food Distribution Center, Canada, taken with a scanner made in Sweden. Scanning technology identifies areas where energy can be lost to the environment so companies can improve the insulation performance of buildings with door seals, dock plates and air curtains. November 10, 2010 (Photo courtesy Walmart) Creative commons license via Flickr

BRUSSELS, Belgium, August 20, 2019 (Maximpact.com News) – Under the European Union’s primary law to boost energy efficiency – and meet the EU target of cutting energy use by 20 percent by 2020 – all companies with more than 250 employees must conduct an energy audit within a common framework once every four years. The next deadline for compliance is December 5, 2019.

Energy efficiency is key to improving Europe’s security of supply, reducing emissions, assuring affordable energy prices and improving economic competitiveness, the European Commission believes. To achieve these goals, the EU has established the Energy Efficiency Directive, which entered into force on December 4, 2012.

Europe 2020 is the EU’s growth strategy that aims to ensure a smart, sustainable and inclusive economy, driven by five interrelated headline targets that address climate change and energy, research and development, poverty and social exclusion, education, and employment.

The Energy Efficiency Directive requires EU countries to ensure that large corporations carry out energy audits within a common framework. The law also encourages the widespread use of regular energy audits among small and medium sized enterprises.

An energy audit is a thorough assessment of the energy consumption of a company including its buildings, industrial processes and transportation. The goal is to identify cost-effective ways to save energy.

Audits can identify simple ways for companies to save energy and money, such as properly insulating pipes in a factory.

Under Article 8 of the Energy Efficiency Directive, which by now has been transposed into national legislation in all EU Member States, energy audits of large enterprises have to be conducted every four years by a qualified auditor.

A large enterprise is a company which has internationally:

Large EU enterprises were required to carry out the first energy audit by December 5, 2015, and at least every four years after that. The next deadline for compliance with the Directive is December 5, 2019.

Statistica reports that there was a total of 16,200 enterprises of this size throughout the European Union in 2014, the latest year for which statistics are available.

At that time, Germany had the most large companies, 4,252, with Poland next with 1,545 large companies and the United Kingdom third with 1,377. France and Italy round out the top five countries. 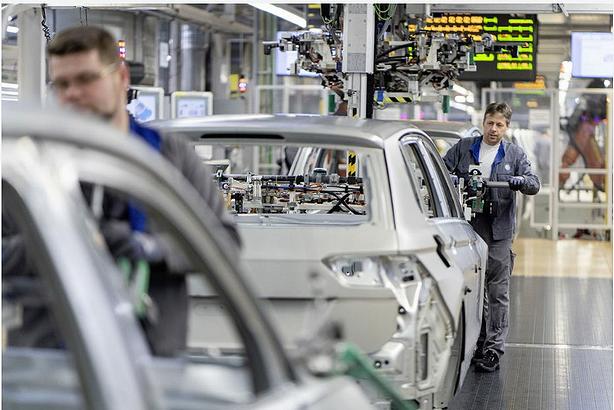 Volkswagen’s headquarters plant in Wolfsburg, Germany is the world’s largest single car-manufacturing complex, with a workforce of almost 20,000. Covering six square kilometers, the plant produces cars for more than 50 countries. Daily production amounted to about 3,500 vehicles in 2018. The two cogeneration plants operated in Wolfsburg by Volkswagen generate power and heat for the Volkswagen plant and also heat for the city of Wolfsburg. March 1, 2019 (Photo courtesy Volkswagen AG) Posted for media use

Six of the 15 largest companies in the European Union are headquartered in Germany, the most of any country. The German car manufacturer, Volkswagen, employed over 640,000 people worldwide in 2017, making it the largest European-based employer in the world at that time.

As an alternative to regular energy audits, an exemption from the requirement of Article 8 could be granted for companies that have integrated an energy or environmental management system.

A study titled “A Study on Energy Efficiency in Enterprises: Energy Audits and Energy Management Systems,” found that some EU countries provide financial incentives for some companies to carry out the audits. The analysis answers a set of key questions by combining the results of an extensive literature review with findings from more than 30 interviews with national experts.

The findings include a thorough review of the implementation in each of the Member States, the instruments used for addressing large, medium and small enterprises, as well as a description of challenges, recommendations and good practice approaches.

The study was conducted by researchers from the Fraunhofer Institute for Systems and Innovation Research ISI and Ricardo Energy & Environment. The information presented was collected in the period from March to September 2015, so this study describes the situation as of late summer 2015. It was published in April 2016.

In Germany, for instance, the German government has implemented a bundle of policy instruments to improve progress in energy efficiency, especially in the industry sector. The German government published the National Action Plan Energy Efficiency in December 2014. Its aim is to create energy savings in industry, commerce and private households by focusing on providing support for innovative ways of saving energy as well as business models for new products and solutions.

The German measures focus on the industry sector and include 500 Energy Efficiency Networks, mandatory audits for large companies, support for waste heat utilization, funding plans for energy efficiency measures and energy audits. In addition, a fund for cross-cutting technologies also funds the creation of a company-specific energy saving concept by an external energy consultant, which consists of an energy review that focuses on the assessment of energy efficiency measures.

Meanwhile, in many countries across the EU, national governments have set up information-providing events, helplines and online portals to exchange information and create tools to help companies implement the rules and best energy efficiency practices.

The study found that some EU countries will carry out mandatory audits on large enterprises to ensure the rules are being observed; others will check a random sample of companies. Penalties for non-compliance range from €10,000 in Austria to €200,000 in Romania.

For smaller companies, the study found that financial support systems are in place to help companies to carry out energy audits. In Germany, for example, the German SME Energy Consulting Programme provides up to 80 percent of the cost with a €8,000 ceiling.

The EU’s Energy Efficiency Communication, officially known as “Communication on “Energy Efficiency and its contribution to energy security and the 2030 Framework for climate and energy policy,” indicates that, between 1995 and 2013, the EU’s energy consumption was maintained at roughly the same level while its GDP grew by 34 percent.

The European Commission said this shows that the EU has managed to decouple economic growth from energy consumption through increased energy efficiency.

The Energy Efficiency Communication proposes a new energy saving target of 30 percent by 2030. This completes the 2030 Framework on Climate and Energy which was adopted by the European Commission on January 22, 2014.

As for the Energy Efficiency Directive, various actions to implement it are underway in Member States.

For example, in Germany, the publicly-owned bank KfW provides preferential loans for energy efficiency retrofits of existing buildings and for the construction of new energy efficient buildings.

In France, the new national law provides for numerous concrete actions, in particular for buildings. Among the measures is a fiscal reduction of up to 30 percent of the cost of energy efficiency renovations, from September 2014 onwards.

The number of Member States applying energy efficiency obligation schemes for utilities is expected to rise from five to 16. In Poland, the relevant provisions of the Energy Efficiency Directive will be entirely implemented through such a system.

The patterns of EU Member States’ energy audits will become clear by the end of this year, since the next deadline for compliance with the Energy Efficiency Directive is December 5, 2019.

The Commission said in July 2014 that based on the analysis of Member States’ actions and additional forecasts, the EU will achieve energy savings of around 18-19 percent in 2020.