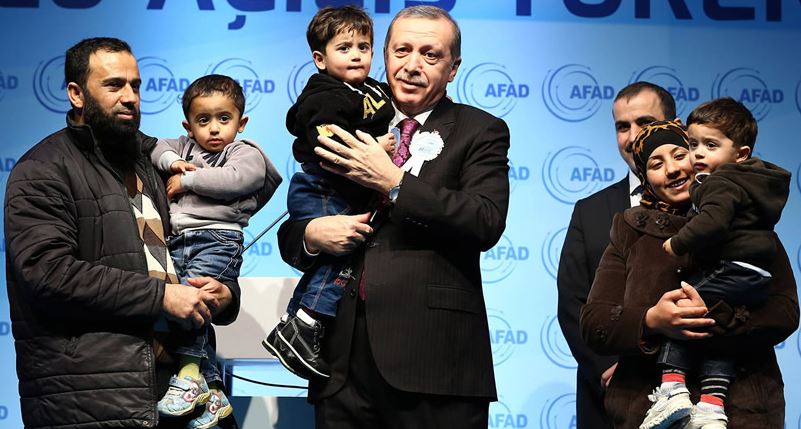 Turkish President Recep Tayyip Erdogan with a refugee family, a few of the four million refugees Turkey is now sheltering. 2018 (Photo courtesy Government of Turkey) Posted for media use

ANKARA, Turkey, January 10, 2019 (Maximpact.com News) – Eyad and his family fled their home in Syria’s Aleppo countryside in February 2017, during the Bashar al Assad regime’s recapture of the city. “The bombing was unbearable,” he explains. “I saw death with my own eyes. I don’t want my children to witness this.”

Now Eyad, his wife Mona and their seven children rent an apartment in Adana, southern Turkey, on the Mediterranean coast of Turkey about three hours by car from the Syrian border. The city hosts around 200,000 Syrian refugees.

Like most Syrians who have moved to Adana, Eyad came in search of work opportunities, according to the NGO Diakonie, a charitable organization of Protestant churches in Germany and Austria as well as numerous free churches.

Eyad and the three eldest children work collecting cardboard which they sell by weight. The four members of the family earn 15 Turkish liras a day (€3.8). Some months they are unable to pay the rent. Fortunately, their landlord is understanding and waits until they gather enough money to pay.

Despite the hardships he and his family face, Eyad says, “There is nothing difficult here, except for the language.”

Almost four million registered refugees live in Turkey – Syrians, Iraqis, Afghans, Iranians, and Somalis, among others – making Turkey the country with the highest number of refugees in the world. Almost half of them are children. 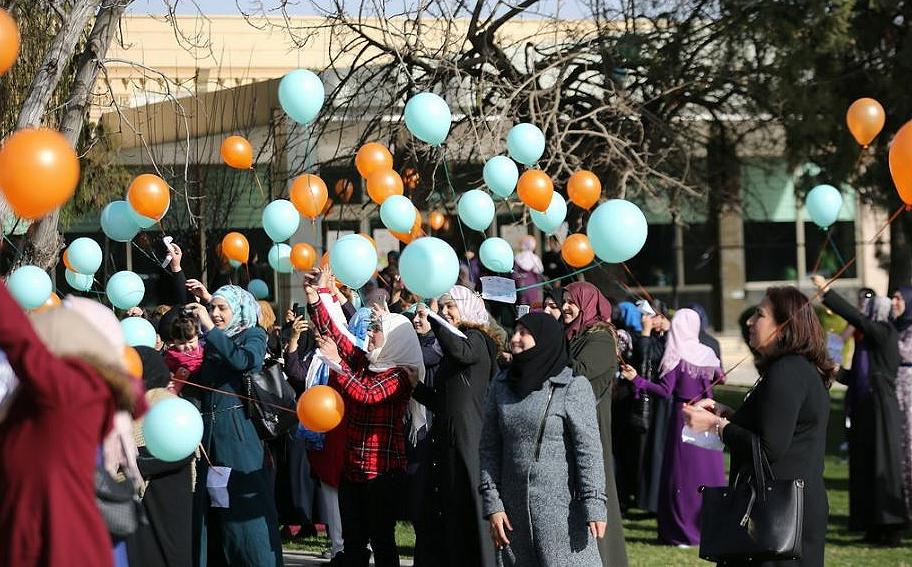 Of these, almost 143,800 people are hosted in camps run by the Turkish authorities, where refugees have access to shelter, health, education, food, and social activities.

For many refugees, access to these basic facilities is often difficult for a range of reasons, including problems in registering with local authorities and the language barrier.

Over 95 percent of Syrian refugees in Turkey remain outside of camps with limited but growing access to basic services. The EU has contracted 58 humanitarian projects with 20 humanitarian organizations, which are working in close cooperation with Turkish partner organizations to help the most vulnerable refugees.

The Emergency Social Safety Net, the largest ever EU humanitarian program, has now assisted 1.5 million of the most vulnerable refugees in Turkey.

The EU-funded program, launched in September 2016, is the largest single humanitarian project in the history of the European Union.

Visiting Turkey, Christos Stylianides, commissioner for humanitarian aid and crisis management, said, “1.5 million refugees in Turkey are now able to meet their basic needs and live in dignity. The European Union, in cooperation with Turkey, is bringing a real change in the lives of the most vulnerable refugees. I am very proud of what we have achieved together. Jointly with Turkey we will continue this support, focusing on making our assistance sustainable.”

The Emergency Social Safety Net provides monthly cash transfers via a debit card to help refugees buy what they need the most, such as food, medicines, or rent.

Another flagship program, the Conditional Cash Transfer for Education, has surpassed its initial goals and now supports the families of more than 410,000 children who attend school regularly.

The EU programs will continue in 2019, with a focus on further supporting the most vulnerable and ensuring a sustainable transition from humanitarian aid to a long-term response.

The EU humanitarian funding foreseen for 2019 is €640 million, out of which €80 million will be dedicated to support education in emergencies.

This funding is part of the second tranche of €3 billion of the Facility for Refugees in Turkey for both humanitarian and non-humanitarian assistance.

“Turkey’s geographical position makes it a first reception and transit country for many refugees and migrants. As the result of an unprecedented influx of people seeking refuge, the country currently hosts almost four million registered refugees and is making commendable efforts to provide them with humanitarian aid and development support. “The EU is committed to assisting Turkey in dealing with this challenge,” according to the European Commission’s December 2018 description of the EU facility for refugees in Turkey.

The Emergency Social Safety Net program is implemented by the World Food Programme and the Turkish Red Crescent in close collaboration with the Turkish authorities.

The Government of Turkey has been providing conditional education support for children from the most vulnerable families in Turkey since 2003. This program has now been extended to vulnerable refugee children in both Turkish public schools and temporary education centers.

The extension of the CCTE is implemented through a close partnership between the Ministry of Family and Social Policies, the Ministry of National Education, The Disaster and Emergency Management Presidency of Turkey (AFAD), the Turkish Red Crescent and UNICEF. It was made possible thanks to a €34 million contribution from the European Union Civil Protection and Humanitarian Aid, their largest-ever contribution to education in emergencies, and support from Norway and the United States.

With financing from the EU of almost €1 billion to date, the refugees receive around €20 per person per month, plus quarterly top-ups to meet their basic needs.

President Recep Tayyip Erdogan wants the refugees to return eventually to their own countries. “We are not in a position to continue hosting 3.5 million refugees forever,” he said at a speech last year to village and provincial leaders at the Presidential Palace in Ankara.

In his New Year’s message to his country, President Erdogan expressed pride in Turkey’s response to the Syrian crisis, saying, “Today, we host over four million oppressed people in our lands. Among this large mass of people are individuals from every faith, every race, every disposition and every sect. Because, as Yunus Emre puts it succinctly in his saying, ‘We love the created for the creator’s sake,’ what we care about in those who come to our door is not their identities but them being humans only.”

Today, there are over 258 million migrants around the world living outside their country of birth, according to data supplied by UNICEF. This figure is expected to increase due to: population growth, increasing connectivity, trade, rising inequality, demographic imbalances and climate change.

The United Nations is attempting to provide a safe, orderly system for migration. In late December 2018, world governments adopted the Global Compact for Migration, the first-ever UN global agreement on a common approach to international migration in all its dimensions.

Adopted in Marrakech, Morocco on December 10 by 164 Member States, the agreement was described by UN Secretary-General António Guterres as a “roadmap to prevent suffering and chaos.”

The Global Compact for Migration was adopted on December 19, 2018 by the United Nations General Assembly with 152 votes in favor, 12 abstentions, and five votes against, by: the Czech Republic, Hungary, Israel, Poland, and the United States.

The global compact is non-legally binding. It is grounded in values of state sovereignty, responsibility-sharing, non-discrimination, and human rights, and recognizes that a cooperative approach is needed to optimize the overall benefits of migration, while addressing its risks and challenges for individuals and communities in countries of origin, transit and destination.

DRAWDOWN: The most comprehensive plan ever proposed to reverse global warming edited by Paul Hawken... END_OF_DOCUMENT_TOKEN_TO_BE_REPLACED

Your Guide to Healthier Products  What if products improved your quality of life and helped... END_OF_DOCUMENT_TOKEN_TO_BE_REPLACED