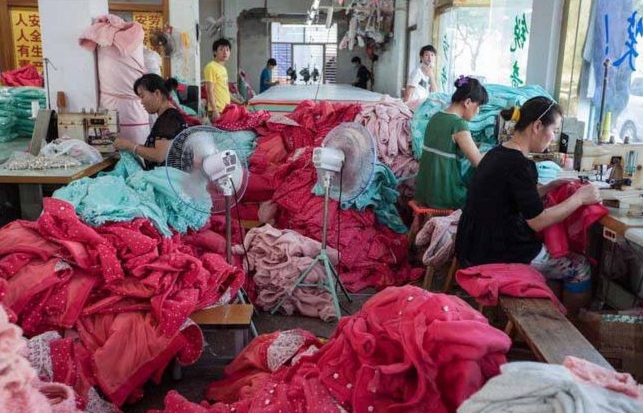 Workers assemble children’s wear in a textile factory in Huzhou, China. Greenpeace tested the garments for hazardous residues of nonylphenol ethoxylates, phthalates, antimony and other toxics and found plenty of chemical risks. (Photo by Greenpeace International)

In 2015, there were 2,072 alerts and 2,745 follow-up actions registered in the Rapid Alert system. Since 2003, the system ensures that information about dangerous non-food products withdrawn from the market and/or recalled anywhere in Europe is quickly circulated between Member States and the European Commission.

Last year, the most frequently notified risk – 25 percent of the total of all notifications – was chemical risk, in toys, clothing and jewelry.

Last year, toys (27 percent) and clothing, textiles and fashion items (17 percent) were the two main product categories for which corrective measures had to be taken. These were also the most notified products in 2014, but that year the risk of injuries, rather than chemical risk, was the most frequently notified.

The most frequent chemical risks notified in 2015 related to products such as fashion jewelry, contaminated with harmful heavy metals like nickel and lead, and toys containing phthalates – a family of industrial chemicals used to soften PVC plastic. Phthalates can damage the liver, kidneys, lungs, and reproductive system, particularly the developing testes.

With 62 percent of the notified dangerous products coming from China, this country remains the number one country of origin in the alert system. It is the EU’s largest source of imports.

The Commission, EU Member States and businesses are working together to ensure that these unsafe consumer goods are removed from the European market.

Věra Jourová, EU Commissioner for Justice, Consumers and Gender Equality, says she plans to go to China in June to advance cooperation with the Chinese authorities on product safety.

“Two challenges lie ahead of us: online sales bringing products directly to consumer’s houses through mail, and the strong presence of Chinese products signaled through the Rapid Alert system,” said the commissioner.

This way, appropriate follow-up action, such as a ban on sales, withdrawal, recall or import rejection by Customs authorities, can be taken anywhere in the EU.

Thirty-one countries – the 28 EU Member States together with Iceland, Liechtenstein and Norway, currently participate in the system.

When one Member State posts an alert on the system, other countries can spot the product on their market and react to this initial alert.

Over 65 percent of Europeans buy products online and the number of online shoppers has grown by 27 percent between 2006 and 2015. A new challenge is now to address the online channel, which also brings products from outside the EU through mail into consumers’ households that may not have been subjected to safety verification.

The Commission is working on further improving the Rapid Alert system to include online purchases.

Collaboration with the Chinese authorities continues to be a priority for the EU and, more specifically, takes place within the Rapid Alert System China mechanism.

Each notification concerning a product of Chinese origin is sent to the Chinese administration, so that they address the issue with the manufacturer or exporter directly if these economic operators are traceable.

To date, China has followed up on as many as 11,540 notifications and has been able to take corrective measures in 3,748 cases. In many cases, tracing the source of the product remains difficult.

Featured image: Soft plastic toys are softened with phthlates, exposure to which can cause serious health problems. (Photo by bergerbot)