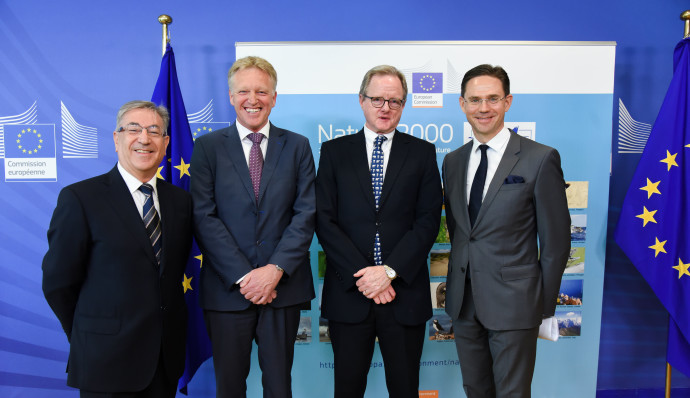 The Dutch nonprofit Rewilding Europe says rewilding ensures that natural processes and wild species will play a much greater role in both landscapes and seascapes. Rewilding helps landscapes become wilder, while providing opportunities for people to reconnect with such wilder places for the benefit of all life.

Now the concept of rewilding Europe has attracted substantial investment to turn these goals into reality.

Earlier this month, the European Commission and the European Investment Bank announced the first loan agreement backed by the Natural Capital Financing Facility.

The €6 million loan agreement with Rewilding Europe Capital is expected to provide support for more than 30 nature-focused businesses across Europe.

Rewilding Europe Capital (REC) is Europe’s first conservation and rewilding enterprise financing facility. With this first project, an ambitious new initiative to protect biodiversity and support climate adaptation in Europe has been realized.

The Bank on Nature Initiative builds on the Natural Capital Financing Facility, an established financing partnership between the European Commission and the European Investment Bank supporting nature and climate adaptation projects through tailored loans and investments, backed by an EU guarantee.

It recognizes and fosters the business case for investing in natural capital for biodiversity and climate change adaptation purposes.

“Nature is essential for our lives, well-being and also underpins our economy,” said Karmenu Vella, European Commissioner for Environment, Maritime Affairs and Fisheries, at the signing ceremony.

“The recent evaluation of the EU Nature Directives has shown that creating new means to attract investment in nature protection and its sustainable use is more important today than ever before. I am particularly pleased that the first project signed under the Natural Capital Financing Facility will directly contribute to the implementation of our EU Nature Directives and also boost our rural economies and create jobs,” Vella said.

Since its formal launch in September 2013 and supported by the Adessium Foundation and Dutch Postcode Lottery, REC has demonstrated its potential through a pilot phase which Rewilding Europe has now extended in this new partnership with the European Investment Bank and their Natural Capital Financing Facility.

“In places like Namibia and Costa Rica, significant nature-based economies have been developed by stimulating private sector involvement and investment,” says Frans Schepers, managing director of Rewilding Europe. “In Europe, where such economies are still in their infancy, we can learn a lot from these countries.”

“The Bank on Nature Initiative has the potential to stimulate the development of nature-based economies and I am excited that Rewilding Europe Capital can help facilitate it,” said Schepers. “Both nature and people will benefit.”

Since the launch of its pilot phase in 2013, REC has provided €445,000 in loans to 17 enterprises in five countries – Portugal, Italy, Croatia, Netherlands and Romania.

These are collectively leveraging the protection of 20,000 hectares of natural landscapes and will inject over €25,000 of direct cash funding per year towards protecting and sustaining these host natural environments and their wildlife.

“Signed today, this contract with the EIB is a great step forward for Rewilding Europe Capital,” says Ilko Bosman, executive director of Rewilding Europe Capital B.V. “It will allow us to really scale up our efforts and beneficial outcomes. But more than this, it also throws a spotlight on the ability of commercial finance to contribute positively to nature conservation and rewilding.”

The long-term goal of Rewilding Europe Capital is to create 250 jobs through the businesses which it supports. Going forward, it will continue to stimulate and underpin wildlife and nature-based businesses in rural areas, thereby making an essential contribution to the comeback of wild nature and wildlife in European landscapes.

Rewilding Europe Capital was established and developed with business and financial expertise from Conservation Capital, an initiating partner of Rewilding Europe, and who will also support the investment management of the portfolio.

The entire effort is supported by the European Commission’s LIFE Programme, the EU’s financial instrument supporting environmental, nature conservation and climate action projects throughout the EU.

Since 1992, LIFE has co-financed some 4,306 projects. For the 2014-2020 funding period, LIFE will contribute roughly €3.4 billion to the protection of the environment and climate.