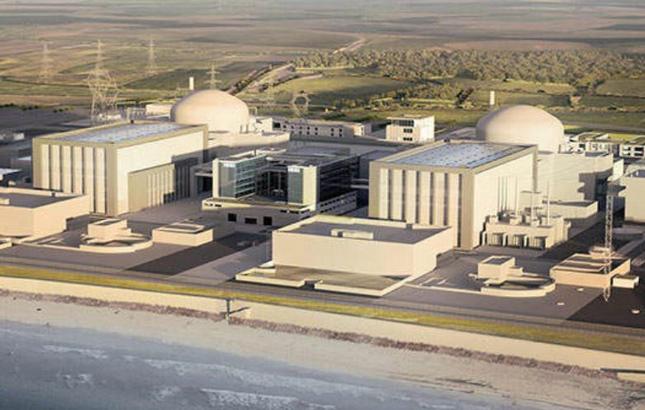 PARIS, France, March 5, 2020 (Maximpact.com News) – French electric utility giant EDF, largely owned by the French state, is planning for large-scale production of hydrogen to be powered by its fleet of UK nuclear plants, including the giant Hinkley Point C project in Somerset, England..

Clean hydrogen is expected to play a vital role in the transition to low-carbon energy as it is a zero-emissions fuel that can either be burned to generate energy or turned into electricity directly using a fuel cell.

Hydrogen can be used for energy storage, heat, transport, and to decarbonise polluting industrial processes such as steel and cement production.

The H2H plan is to take advantage of the low carbon, low cost electricity from the nuclear power station to produce hydrogen gas in bulk from electrolysers.

The H2H consortium says that linking electrolysers to nuclear-generated electricity “would produce enough hydrogen to meet a significant portion of the forecasted demand in the UK,” while combining the reliable, baseload output of nuclear with the low-carbon credentials of green hydrogen production powered by variable renewables such as offshore wind.

The hydrogen produced could be used for powering vehicles, supplying industrial processes and “even to inject it into the UK gas network,” EDF says.

Climate Change Minister Lord Duncan said, “Using the power of hydrogen could help cut emissions, create jobs and make industrial processes cleaner and greener, benefitting the whole economy as we work towards net zero by 2050. This innovative project from EDF Energy R&D will help our efforts to roll out hydrogen at scale by the 2030s – a crucial step towards the end of the UK’s contribution to global warming.”

The consortium recently finished a feasibility study that concluded nuclear-powered hydrogen is feasible on technical and safety grounds, with the potential to be scaled-up from a planned demonstrator project at the Heysham 2 nuclear power station in northwest England.

The study found that, “EDF Energy’s nuclear new-build project, Sizewell C, which is currently in development, could support the modular installation of large-scale electrolysers. Hinkley Point C, which is already in construction, also presents the same opportunity.”

The 3.2GW Hinkley Point C, being built in southwest England, will be the UK’s first new nuclear plant for 20 years when it enters service, scheduled for 2025 or later.

Xavier Mamo, director of EDF Energy R&D UK Centre said, “We are very pleased to demonstrate the feasibility of coupling hydrogen production and nuclear generation technologies to support the delivery of a net-zero economy. Affordable and low carbon hydrogen produced from centralised low cost nuclear generation has the potential to fuel a range of local applications, from industrial processes to low carbon transport.”

They include the stable output of nuclear generation that the researchers reckon will ensure 93 percent utilisation of the electrolyser and the ability to re-use the other by-product of the process, oxygen, in the nuclear cycle.

H2H started as a part of a UK-government-backed hydrogen-economy scheme that recently awarded funds to link the world’s largest offshore wind farm to green hydrogen production. H2H failed to proceed to its next round, but EDF Energy confirmed to Recharge that the project remains on its corporate agenda.

“EDF was delighted to lead the Hydrogen to Heysham consortium, which successfully demonstrated the technical feasibility of producing clean hydrogen by co-locating electrolysis facilities at our nuclear site in Lancashire,” the energy company said in a statement.

“EDF is now considering options building on the learnings of the project to further develop this innovative concept, with a focus on low-carbon hydrogen applications, to demonstrate it either at Heysham or at another low-carbon generation site.”

Will Hydrogen Be Green, Blue or Gray

Hydrogen is increasingly seen as an enabler of the energy transition, with the ability to push decarbonisation deep into sectors such as heating and transport where emissions reductions are badly lagging those seen in the power industry.

The more hours per day that an electrolyser is used, the lower the cost of the hydrogen produced, which makes nuclear-powered hydrogen a potentially cheaper option than green H2 produced from intermittent wind or solar power.

Most attention is now focused on the competing future merits of green hydrogen from renewables and blue hydrogen that uses carbon-capture and storage to decarbonize hydrogen produced using fossil sources.

Both are seen as preferable to the grey hydrogen from unabated fossil fuels that is currently the cheapest on the market.

The H2H team, which along with EDF includes the European Institute for Energy Research (EIFER), Atkins and Lancaster University, says there is no readily available colour for nuclear-powered hydrogen.

In January, a new study by the Hydrogen Council, a global initiative of energy, transport and industry companies with a united vision and long-term ambition for hydrogen to foster the energy transition, with consultant McKinsey calculated that renewable hydrogen’s price will fall to about $1-1.50/kilogram in optimal locations, and roughly $2-3/kg under average conditions, over the next five to 10 years.

Nuclear power at the point of generation shares the zero-carbon credentials of renewables, although H2H does assign a nominal carbon footprint to its project to reflect the lifecycle emissions profile of a nuclear plant.

But the waste and safety concerns surrounding nuclear power could make it a difficult addition to the green hydrogen group.

The EDF project is by no means the only hydrogen production effort happening in Europe.

Late last month, Royal Dutch Shell and Gasunie released plans for what they claim to be Europe’s biggest green hydrogen project. It is located in the Netherlands, powered by up to 10GW of offshore wind in the North Sea.

The oil giant and gas infrastructure group will advance the NortH2 project in conjunction with Groningen Seaports, with a large hydrogen electrolyser planned to be sited in Eemshaven.

The partners want to have the first hydrogen flowing from the project by 2027, powered by an initial 3-4GW of offshore turbines. The offshore wind fleet could grow as large as 10GW by 2040, the group said a statement announcing the project, with a production of 800,000 tonnes of green hydrogen annually.