Broiler chickens raised for slaughter are crowded by the thousands into factory farm warehouses, January 3, 2008 (Photo by Farm Sanctuary) 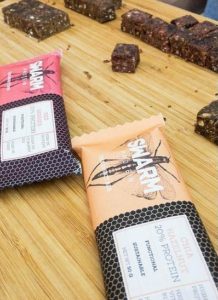 In fact, meeting the world’s voracious and growing demand for protein through sources other than meat could prevent millions of deaths per year and sharply reduce greenhouse gas emissions, the new report argues.

“It will be impossible to sustainably satisfy the world’s future demand for meat. What this report shows is that it can be possible to produce enough nutrition for 10 billion people and improve people’s health without necessarily giving up meat – even red meat – altogether, through innovation in products, improvements in how we produce beef, pork and chicken, and an effort on the part of the consumer to embrace a more diverse diet,” said Dominic Waughray, managing director of the World Economic Forum.

This year’s annual World Economic Forum runs from January 22-25 in Davos-Klosters, Switzerland. The Forum will convene 3,000 leaders from all parts of society to shape a new global architecture, which organizers are calling “the next wave of globalization, Globalization 4.0.”

The research on meat, published January 3 in the report “Alternative Proteins” finds that the nutritional needs for a future world population of 10 billion can be met sustainably, and with positive health consequences, through a combination of innovative protein sources, improved production systems and changed consumer behavior. It will be central to the discussions in Davos later this month.

The report is unique in its focus on both the human health and environmental impacts of meat consumption. For human health, the research finds that switching from beef to other protein sources could reduce the overall global burden of diet-related deaths by 2.4 percent, with that number climbing to five percent in high-income and upper-middle-income countries.

This will be increasingly important given the projected demand for meat from emerging middle classes. Demand for protein is set to soar, placing huge pressure on the environment.

In terms of environmental impact, 2010 data shows that production of beef alone was responsible for 25 percent of all food-related greenhouse gas emissions.

The 13 sources of protein analyzed in the report are: beef, pork and chicken; fruits and vegetables that can be eaten naturally or processed, such as beans and peas; processed non-animal substitutes such as tofu, wheat-gluten products or mycoprotein; and novel products such as culture meat, insects and alga spirulina.

The report illuminates a striking difference between the greenhouse gas emissions of beef production and other sources of protein.

While beef has an emissions intensity of 23.9 kilograms of CO2 equivalent per 200k calories, beans, insects, wheat and nuts emit one kilogram or less CO2 equivalent for the same nutritional value.

Other sources, such as tofu, pork, alga and chicken, produce only three to six kilograms CO2 equivalent.

“Meat production as currently practiced globally is unsustainable at the projected levels of growth, and as such will require new approaches to reduce environmental impact and will require a shift to more sustainable diets,” said Michael McCain, president and CEO, Maple Leaf Foods, the Canadian consumer packaged meats company.

“Maple Leaf is committed to supporting consumer desire for more choices in their protein diet with plant protein-based foods providing an exciting path to both business and environmental value creation. In addition, we are equally committed to addressing the reconstruction of current meat production systems to ensure they fall in line with a sustainable future,” said McCain.

While the data highlights the positive health and environmental benefits of alternative proteins, it also details the scale of the challenge in building a more sustainable food system.

On the technical side, “producing meat in the laboratory without the involvement of living animals is a huge technical feat,” states the report. Only in the past decade have technologies advanced enough to make this conceivable, with forms of meat that might be used in products which traditionally contain minced meat such as burgers already quite advanced and projected to be available to the public in the next few years.

Yet, while lab-grown beef is seen by many as a more environmentally-friendly alternative to traditionally-reared beef, the report finds that current production methods are energy intensive.

The report notes that could be changed. As production processes mature and production is scaled up, leveraging renewable energy sourcing and localizing production in cities, the environmental benefits of lab-grown meat could be enhanced.

As important, a positive narrative around alternative proteins is also needed to change social thinking.

The report calls for transformation in four sectors:

“The evidence is clear, our food system needs to be transformed for the sake of our planet and the future of humankind,” said Marco Lambertini, director general, WWF International.

“And it’s urgent – we are the last generation that can do something about this before the system collapses,” Lambertini warned. “Finding alternative sources of protein that are healthy, nutritious and respectful of the planetary boundaries is a must.”