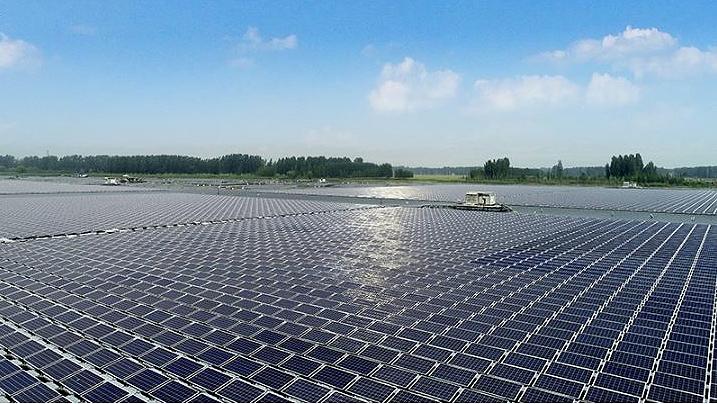 The floating of solar arrays on water relieves the pressure on scarce, densely populated lands and can be used to repurpose mining reclamation areas. The technology opens new horizons to scale up solar power globally.

The total installed floating solar power in 2018 is foreseen to be near one gigawatt, enough energy to power about 700,000 homes.

Floating solar is especially attractive to fast-growing Asian economies. Interest is growing in the region, and large plants are being installed or planned in China, India and Southeast Asia, finds a newly published market report from the World Bank Group and the Solar Energy Research Institute of Singapore.

This first-of-its-kind market report estimates the global potential of floating solar to be 400 gigawatts –  a figure roughly equal to the total capacity of all solar photovoltaic (PV) installations worldwide at the end of 2017.

In India the first floating PV plant of 10 KW was installed in a lake in Kolkata in 2014. More recently a 100 KW floating solar power plant was installed in NTPC Kayamkulam in the state of Kerala, which is the largest such system in India.

The floating platform was developed in India by the joint efforts of a private company, NTPC Energy Technology Research Alliance, and the government of India’s Central Institute of Plastic Engineering and Technology.

The NB Institute of Rural Technology headed by Gon Chaudhuri reports that around 300 GW of solar power could be generated by tapping just 10 to 15 percent of the water bodies in India. The Institute identifies the states of Bengal, Bihar, Kerala, Odisha and Assam as those with the greatest floating solar potential.

In August, South Korea completed world’s first floating solar power plant that tracks sunlight. The 1,600 solar voltaic modules installed on a floating deck go round and round, following the Sun’s movements throughout the day while the array floats on a reservoir in Gyeonggi-do Province.

Since the floating modules can collect sunlight reflected off water, developers say this type of floating solar plant can generate more power than ground-based systems. 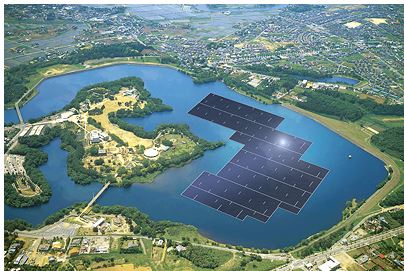 One supplier of floating PV systems has claimed that water losses could be reduced to as much as 70 percent and makes a good case for these systems. Besides preventing water losses, the modules and the floats anchoring them reduce the photo-synthesis process that promotes algae and other organic growth. This is particularly of interest to water utility companies as it reduces the water treatment and labor costs. Also as large power consumers, utilizing the water surface to generate electricity help them save on their energy cost.

The Chinese firm Trina Solar announced on October 31 that it has supplied 17MW of PV modules to the largest floating PV plant in Europe. The O’MEGA 1 PV project has been developed by Akuo Energy, France’s leading independent producer of renewable energy.

Once operational, the plant located in Piolenc (Vaucluse) will produce 100 percent renewable energy covering the consumption of more than 4,700 households. The plant is spread over a 17-hectare property and will avoid the emission of roughly 11,100 tons of CO2 per year.

In the UK, water company United Utilities started work last year on a floating solar farm on a Greater Manchester reservoir, which will be Europe’s largest once complete next year.

Some challenges persist – the lack of a long-standing track record, the possible effects on water quality, the costs and complications of anchoring and mooring the installations, and the relative complexity of maintaining the electrical components of the floating solar arrays.

Yet the benefits are clear. In some cases, floating solar allows for power generation to be sited much closer to areas where demand for electricity is high.

“At some large hydropower plants, only three to four percent of the reservoir would need to be covered with floating solar panels to double the electricity generation capacity of the dam,” the report calculates.

Combining hydropower and solar power outputs can smooth the variable nature of solar power and help manage periods of low water availability by using solar capacity first and drawing on hydropower at night or during peak demand.

In agricultural reservoirs, the solar panels can reduce evaporation, improve water quality, and serve as an energy source for pumping and irrigation, the report points out.