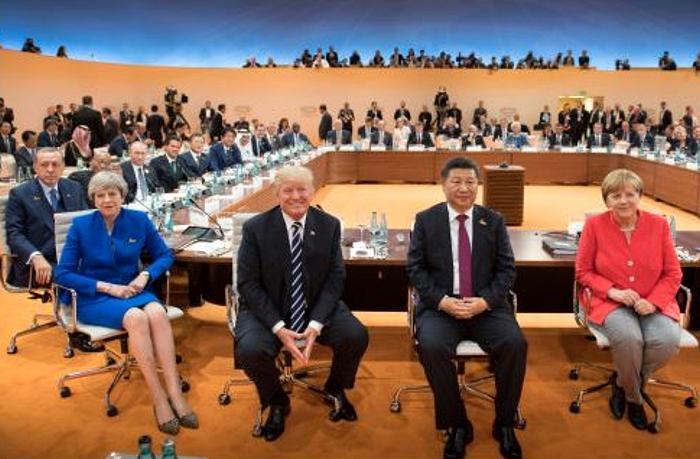 HAMBURG, Germany, July 10, 2017 (Maximpact.com News) – Leaders of the G20 countries came to Hamburg July 7-8 and after a tense meeting during which the United States stood alone in its rejection of the Paris Agreement on climate, Chancellor Angela Merkel said the G20 nations would not attempt to conceal the dissent in their ranks.

“With a view to the fields of climate and energy, discussed at the G20 summit,” Merkel said, “Where no consensus can be achieved, the Declaration must reflect dissent.”

The G20 Leaders Declaration states, “We take note of the decision of the United States of America to withdraw from the Paris Agreement. The United States of America announced it will immediately cease the implementation of its current nationally-determined contribution and affirms its strong commitment to an approach that lowers emissions while supporting economic growth and improving energy security needs.”

Adopted by consensus in 2015, the Paris climate accord holds the increase in the global average temperature to less than 2 °C above pre-industrial levels. To date, 195 countries, have signed the agreement, and 153 have ratified it, including the United States.

Under the Paris Agreement, each country determines, plans and reports its own contribution to mitigating global warming. There is no mechanism to force a country to set a specific target by a specific date.

While acknowledging disagreement with the United States, the 20 most industrialized nations tried to put a good face on it in the G20 Declaration, saying, “The United States of America states it will endeavor to work closely with other countries to help them access and use fossil fuels more cleanly and efficiently and help deploy renewable and other clean energy sources, given the importance of energy access and security in their nationally determined contributions.”

The leaders of the other 19 members declared that the Paris Agreement is “irreversible,” and reinforced their commitment to help developing countries cope with the changing climate.

“We reiterate the importance of fulfilling the UNFCCC commitment by developed countries in providing means of implementation including financial resources to assist developing countries with both mitigation and adaptation actions in line with Paris outcomes,” they state.

British Prime Minister Theresa May said at the close of the G20 meeting on Saturday, “Like other world leaders here, I am dismayed at the U.S. decision to pull out of the Paris Agreement and I have urged President Trump to re-join it.”

“The UK’s own commitment to the Paris Agreement and tackling global climate change is as strong as ever,” said May. “Not only will this protect the environment for future generations, it will keep energy affordable and maintain a secure and reliable supply in order to protect the interests of businesses and consumers.”

Christine Lagarde, managing director of the International Monetary Fund, said as the meeting closed, “I strongly welcome the G20’s focus on climate change, the sustainable development goals, and the challenges facing low-income countries.”

“I commend, in particular, Germany’s leadership in launching the Compact with Africa, which is designed to boost private investment across the continent. The countries involved in the first wave of this effort are already receiving support from the IMF, to help strengthen their macroeconomic frameworks and institutions, including by increasing support for capacity development,” said Lagarde.

The G20 Declaration welcomed the May report from the Organization for Economic Cooperation and Development (OECD) “Investing in Climate, Investing in Growth.“

The report describes the structural, financial and political changes that can enable transition to a low-carbon world. That is the path the other 19 members of the G20 say they will take, regardless of the position of the Trump administration.

“We reaffirm our strong commitment to the Paris Agreement,” they declared, “moving swiftly towards its full implementation in accordance with the principle of common but differentiated responsibilities and respective capabilities, in the light of different national circumstances and, to this end, we agree to the G20 Hamburg Climate and Energy Action Plan for Growth.

“Innovation in sustainable and clean energy technologies is a top priority for G20 members,” they say in the Hamburg Climate and Energy Action Plan for Growth.

The Plan excludes the United States, noting, “The United States is currently in the process of reviewing many of its policies related to climate change and continues to reserve its position on this document and its contents.”

The other 19 members of the group state their urgency to limit climate change as soon as humanly possible because the dangers are real and increasing.

“The impacts of climate change such as changes in temperature, precipitation, sea level rise and the frequency and intensity of extreme weather events are already noticeably impacting global ecosystems, economies, and societies. This puts at risk past and future progress towards the 2030 Agenda, including the goals of ending poverty and hunger,” warns the Hamburg Climate and Energy Action Plan for Growth.

“Whilst these impacts will be felt by all countries, poor and vulnerable people will be disproportionately affected. Faster and more effective responses for affected poor and vulnerable people, in particular women and children, are required. Therefore, taking appropriate steps to enhance adaptive capacity, including through support to adaptation planning, is becoming increasingly pressing,” the 19 group members warn. 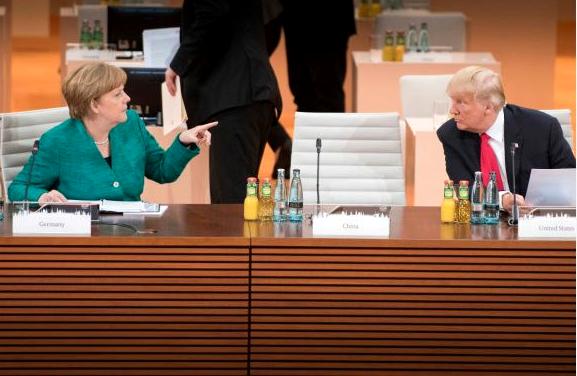 Nevertheless, U.S. President Donald Trump views the G20 meeting as a success for the United States. “The G 20 Summit was a great success for the U.S.,” Trump tweeted at 4am on July 9. “Explained that the U.S. must fix the many bad trade deals it has made. Will get done!”

At the G20 meeting European President Jean-Claude Juncker described climate change as “the biggest challenge for the future.”

Juncker said, “We regret the decision by the US Administration to withdraw from the Paris Agreement on Climate Change. The Agreement remains a corner stone for global efforts to effectively tackle climate change and implement the 2030 Agenda for sustainable development and we consider that it cannot be re-negotiated.”

The European president reassured the international community that the EU remains “steadfastly determined to swiftly and fully implement the Paris Agreement and accelerate the low-carbon transition,” and support vulnerable countries in the fight against climate change.

“It is still important for us that we do not fall behind what we had arranged in Paris in terms of climate protection,” said Juncker on the first day of the G20 meeting.

“What we do today for climate protection prevents the causes of tomorrow’s future; What we leave today, accelerates flight from the areas affected by drought,” Juncker said. “To this extent, the issue of climate change must be pursued here with all intensity and seriousness. It is the great future, and Europe must make a contribution.”

The G20 leaders declared, “We recognize the opportunities for innovation, sustainable growth, competitiveness, and job creation of increased investment into sustainable energy sources and clean energy technologies and infrastructure.”

“We remain collectively committed to mitigate greenhouse gas emissions through, among others, increased innovation on sustainable and clean energies and energy efficiency, and work towards low greenhouse-gas emission energy systems,” they said.

Environmental groups naturally praised the 19 members of the group who remained steadfast on climate protection.

World Wildlife Fund senior vice president of climate change and energy Lou Leonard said, “The G20 was a gut check moment where the world stood firm on continued climate action, despite pressure from the Trump administration. By reaffirming the Paris Agreement as irreversible and offering a concrete plan to implement it, world leaders made clear that they are looking forward, unwilling to retreat from gains made.”

“These leaders stand with thousands of American businesses, colleges and universities, and state and local governments, who have made clear that they too remain committed to climate action, a clean energy economy and a safer future, regardless of what Washington does,” said Leonard. “Together, the leaders of the real economy in the United States and political leaders of the world’s other largest economies are united in saying ‘We Are Still In.'”

At the G20 leaders’ summit, the World Bank Group announced the creation of an innovative new facility with more than US$1 billion to advance women’s entrepreneurship and help women in developing countries gain access to the finance, markets, and networks necessary to start and grow a business.

The United States initiated the idea for the facility and will serve as a founding member along with other donor countries.

“This incredible facility will have a significant impact on women’s economic development around the world,” said President Trump. “It will help increase opportunities and economic growth while addressing unique barriers women entrepreneurs face. I am proud the United States is helping to lead support of this unprecedented initiative.”

World Bank Group President Jim Yong Kim said, “Women’s economic empowerment is critical to achieve the inclusive economic growth required to end extreme poverty, which is why it has been such a longstanding priority for us.”

“This new facility offers an unprecedented opportunity to harness both the public and private sectors to open new doors of opportunity for women entrepreneurs and women-owned firms in developing countries around the globe.”

“‎Everyone benefits when women have the resources they need to participate fully in our economies and societies,” said Canadian Prime Minister Justin Trudeau. “Our government is determined to help women gain the tools they need to be successful entrepreneurs and leaders. This important investment will help women in developing countries to create jobs, build economies that work for everyone, and have a real and fair chance at success.”

“I am happy that this initiative for women presents real added value. I want to sincerely thank everyone who worked on it especially the President of the World Bank Jim Yong Kim and Ivanka Trump and others. We can see from the example of this Women’s Entrepreneurs Finance Initiative that the G20 is not just a two-day Summit, but that the G20 is a process,” said Chancellor Merkel.

Japanese Prime Minister Shinzō Abe said, “Women’s active participation in society is one of the pillars of Abenomics. Women’s empowerment and leadership will diversify and revitalize organization and societies. This facility embodies such belief in developing countries, and is promising initiative to achieve society where women shine.”

The Women Entrepreneurs Finance Initiative (We-Fi), the first World Bank-led facility to advance women’s entrepreneurship at this scale, will work to enable more than $1 billion of financing to improve access to capital, provide technical assistance, and invest in other projects and programs that support women and women-led SMEs in World Bank Group client countries.

The goal of the facility is to leverage donor grant funding, currently over US$325 million, to unlock more than $1 billion in IFI and commercial financing by working with financial intermediaries, funds, and other market actors.

The World Bank Group was invited to create the facility by the United States and Germany. The initiative received strong donor support from Australia, Canada, China, Denmark, Germany, Japan, Netherlands, Norway, Saudi Arabia, South Korea, United Arab Emirates, United Kingdom, and the United States, enabling the Bank Group to take the facility from concept to Board endorsement within the year of the German G20 presidency.

“It’s remarkable how quickly the international community has mobilized support for this new initiative, which has exceeded our target by nearly $100 million,” Kim said. “This demonstrates not only the importance of increasing women’s economic empowerment, but it scales up our efforts to help women open and grow businesses. We’re grateful to President Trump, Chancellor Merkel, and Ivanka Trump for being such strong champions of this facility and the broader cause of women’s entrepreneurship.”