Gold Rush Beneath the Deepest Sea 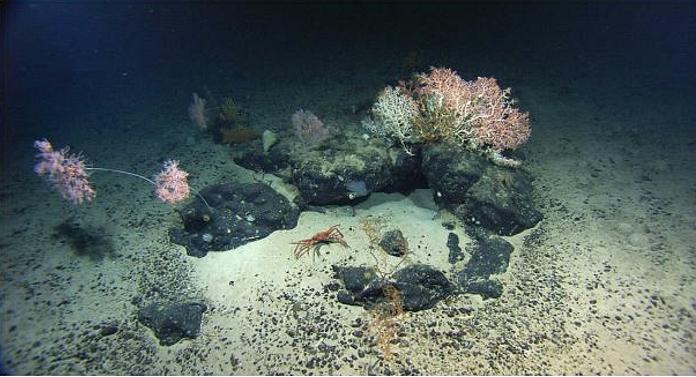 A crab defends its territory on a seamount in the North Atlantic. Seamounts host a very rich biodiversity, with corals, crustaceans, sponges and echinoderms among the most frequently found organisms. (Photo courtesy Mountains in the Sea Research Team, U.S. National Oceanic and Atmospheric Administration (NOAA)) Public domain.

KINGSTON, Jamaica, July 31, 2018 (Maximpact.com News) – Cold, dark, and under extreme pressure, the deep sea holds a wealth of unique and unusual species, habitats and ecosystems. And it contains rich mineral resources, some of them in unique or highly enriched concentrations.

Deep-sea mining is the retrieval of mineral deposits from the deep sea below 200 meters, an area that covers about 65 percent of the planet’s surface, making it the largest habitat for life on Earth.

“The deep seabed … contains valuable mineral deposits. There is growing commercial interest in mining the ocean floor for these minerals. We might be entering into a gold rush to get to these resources and there is a growing competition between countries and companies to exploit these minerals with limited consideration for the effects on nature,” said Carl Gustaf Lundin, director, Global Marine and Polar Programme, International Union for the Conservation of Nature (IUCN).

Regulations under development at the International Seabed Authority (ISA) to manage deep-sea mining are not sufficient to prevent irrevocable damage to these marine ecosystems and a loss of unique species – many yet to be discovered, warns a new report from the IUCN.

The report was launched July 16 in Kingston, to coincide with this year’s gathering of the International Seabed Authority, the treaty organization established under the UN Convention on the Law of the Sea, at its July 2 to 27 meeting. 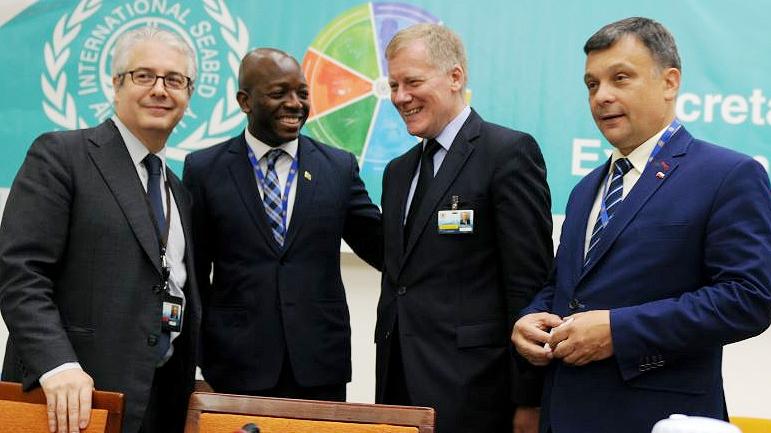 The ISA was established to organize, regulate and control all mineral-related activities in the international seabed area beyond the limits of national jurisdiction, an area underlying most of the world’s oceans.

The ISA’s current goal is to agree on a mining code to regulate the exploitation of the deep seabed. The organization must address both sides of its dual mandate – promoting the development of deep-sea minerals while ensuring that this development does not harm the environment.

There is growing commercial interest in deep-sea mineral deposits as a result of projected rising demand for copper, aluminium, cobalt and other metals. These minerals are used to produce high-tech applications, such as smartphones, and green technologies, such as electric storage batteries.

The IUCN report advises that an effective regulatory framework based on high-quality environmental impact assessments and mitigation strategies is needed to avoid lasting harm to the marine environment from deep seabed mining.

These strategies, in turn, must be based on comprehensive baseline studies to improve the understanding of the deep sea, which remains understudied and poorly understood.

The International Seabed Authority operates by contracting with private and public corporations and other entities, authorizing them to explore and exploit specified areas on the deep seabed for mineral resources.

The Convention has also established a body called the Enterprise, which is to serve as the Authority’s own mining operator, but while much discussion in Kingston revolved around the Enterprise, no concrete steps have yet been taken to establish it.

Some 150 participants from national governments, civil society, contractors, and academia attended the ISA Council meetings in Kingston, and 220 attended the Assembly.

The Council made progress on the draft exploitation regulations, while recognizing the need for further work on the payment mechanism, environmental protection, and the Enterprise.

As of May 2018, the ISA had issued 29 contracts for the mineral exploration of the deep sea.

But according to IUCN experts, the mining code currently under development lacks sufficient knowledge of the deep sea and a thorough assessment of environmental impacts of mining operations that are necessary to ensure effective protection of deep-sea life.

“We are operating in the dark,” says Lundin. “Our current understanding of the deep sea does not allow us to effectively protect marine life from mining operations. And yet, exploration contracts are being granted even for those areas that host highly unique species.”

For an idea of how valuable these minerals are, the IUCN reports that, “Ferromanganese crusts on seamounts in the central Pacific are estimated to contain about four times the cobalt, three and a half times more yttrium, and nine times more tellurium than the entire known land-based reserves of these metals.”

Cobalt is used in alloys for aircraft engine parts, in batteries and in electroplating as well as to color ceramics.

Yttrium is used in making red phosphors for color television picture tubes, to make superconductors and to increase the strength of aluminium and magnesium alloys. It is used in the making of microwave filters for radar and is added to the glass used to make camera lenses to make them heat and shock resistant.

Tellurium is alloyed with copper and stainless steel to improve their machinability. Tellurium has been used to vulcanize rubber, to tint glass and ceramics, in solar cells, in rewritable CDs and DVDs and as a catalyst in oil refining. It can be used with silver, gold, copper or tin in semiconductor applications.

Though there is little empirical evidence of the impacts of deep-sea mining, the potential impacts are worrying, says the IUCN report. Impacts include direct physical damage to marine habitats due to the scraping of the ocean floor by machines and the stirring up of fine sediments on the seafloor that can smother animals and cloud the water.

Also expected are the toxic pollution due to leaks and spills, noise, vibrations and light pollution from mining equipment and surface vessels.

“Potential adverse environmental effects include the actual removal of minerals, some of which have formed over millions of years and host a diverse array of species; physical disturbances that can alter or destroy deep-sea habitats; and the disturbance of seafloor sediment, which could create plumes of suspended particles that will take time to settle and affect the marine environment beyond the mining area,” the IUCN report states. 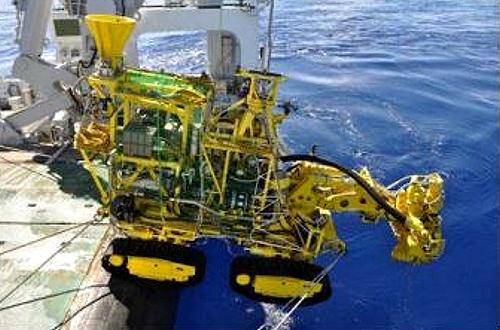 Japan Oil, Gas and Metals National Corporation (JOGMEC)’s experimental ore collector is launched from the deck of the organization’s research vessel Hakurei. The equipment collected crushed polymetallic sulphides at a depth of 1,600 meters. These were lifted to a support vessel using submersible pumps and a riser pipe. Summer 2017 (Photo courtesy METI/JOGMEC via IUCN) Posted for media use.

“With regulations for commercial deep-sea mining currently under development, we are facing a unique window of opportunity to ensure that potential impacts of these operations are properly assessed, understood and publically discussed,” says co-author Kristina Gjerde, IUCN’s Global Marine and Polar Programme senior advisor on the high seas.

“Stringent precautionary measures to protect the marine environment should be a core part of any mining regulations, yet these remain missing in action,” said Gjerde.

“In addition to this,” she warned, “the ISA’s challenging and conflicting mandate will require improved oversight by the international community to ensure marine life is adequately protected.”

On July 26, the Assembly of the International Seabed Authority adopted:

The UN Convention on the Law of the Sea has been ratified by 168 parties, which includes 167 states (164 member states of the United Nations plus the UN Observer state Palestine, as well as the Cook Islands, Niue and the European Union). The United States has refused to ratify the Convention, arguing that the treaty is unfavorable to American economic and security interests.