Dwellings on the banks of Samoa’s Vaisigano River are at risk during increasingly extreme storms. (Photo courtesy UN Development Programme)

To be financed by wealthy countries, the Green Climate Fund was established by 194 governments to limit or reduce greenhouse gas emissions in developing countries, and to help vulnerable societies adapt to the unavoidable impacts of climate change.

The Fund was key to the Paris Agreement on climate which took effect throughout the world on November 4, 2016. The Agreement’s stated aim is to keep climate change “well below” 2°Celsius and, if possible, to 1.5°C above pre-industrial levels.

At the UN climate treaty talks in Paris, wealthy governments, including the United States, pledged to contribute US$100 billion a year by 2020 for climate change adaptation and mitigation projects in the Global South, primarily through the Green Climate Fund.

As of January 2017, contributions to the Green Climate Fund total US$10.3 billion.

In his “Contract With the American Voter,” which defines his program for his first 100 days in office, President Trump pledges to “cancel billions in payments to U.N. climate change programs and use the money to fix America’s water and environmental infrastructure.“

President Obama’s move followed a campaign coordinated by the nonprofit Corporate Accountability International , with more than 100 organizations and nearly 100,000 people asking Obama to transfer the full US$2.5 billion to the Fund.

Although that didn’t happen, the Green Climate Fund Board is already disbursing what money it does have. To date, the Fund has approved more than US$1.3 billion to support low-emission and climate-resilient projects and programs in developing countries.

“This year has demonstrated that the Fund is rapidly gathering pace with regard to scaling up climate finance,” said then Board Co-Chair Zaheer Fakir of South Africa, who held developing country role on the Board. “I am proud of the progress we have made over the past 12 months in improving Fund performance and growing our portfolio of investments.“

Fellow Co-Chair Ewen McDonald of Australia, who this year retains his role representing the developed countries on the GCF Board, said, “I have high hopes that 2017 will be the year of climate finance for the Pacific.“

In December, following the last GCF Board meeting of 2016 in Apia, Samoa, McDonald said, “I am really pleased that the Board approved US$98 million for Pacific proposals at this meeting. This is the largest climate finance meeting to ever be held in the region and it comes on the cusp of 2017, the year Fiji will host the UNFCCC Conference of the Parties.”

The 2017 UN Climate Change Conference, COP23, will take place from November 6 to 17 at the World Conference Centre in Bonn, Germany, the seat of the Climate Change Secretariat. COP23 will be convened under the Presidency of Fiji.

The approved projects are funded in cooperation with accredited partners of the Green Climate Fund, which can be multi-lateral banks or UN agencies, such as the UN Development Programme (UNDP).

One of the projects approved by the GCF Board in Apia was US$57.7 million for integrated flood management to enhance climate resilience of the Vaisigano River Catchment in Samoa, with the UNDP.

As a Small Island Developing State in the Pacific, Samoa has been heavily impacted by increasingly severe tropical storms blamed on the warming climate. 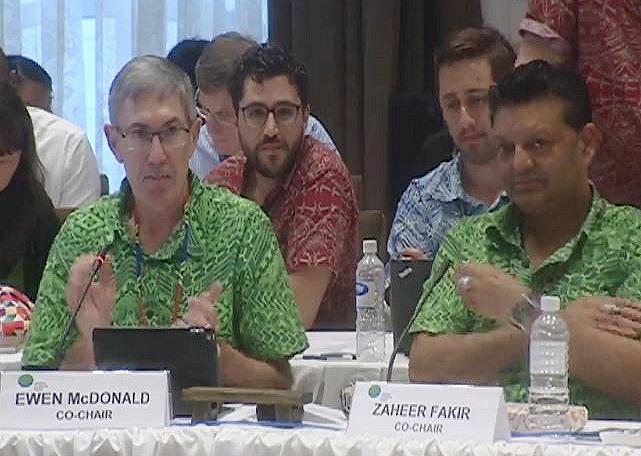 Green Climate Fund Board Co-chairs Ewen McDonald of Australia and Zaheer Fakir of South Africa join in the applause for multi-million dollar decisions to support developing countries as they mitigate and adapt to the Earth’s changing climate. Apia, Samoa, December 15, 2016. (Screengrab from video courtesy Green Climate Fund) Posted for public use

The Integrated Flood Management project, proposed by the government, will enable Samoa to reduce the impact of recurrent storm-related flooding in the Vaisigano River Catchment.

Some 26,528 people in the catchment will benefit directly from upgraded infrastructure and drainage downstream, integrated planning and capacity strengthening, including planning for flooding caused by extreme weather events, and flood mitigation measures, such as riverworks and ecosystems solutions.

Peseta Noumea Simi, who heads Samoa’s Ministry of Foreign Affairs and Trade, said the project is about improving the protection of people living near the river.

“You might be aware that during the cyclone in 2012, the extensive damage caused was as a result of the Vaisigano River flooding,” she told the “Samoa Observer” newspaper.

“And that extended from the mountain down to the ocean. So this is the basis of this program. You will also recognize that along the Vaisigano River route, we have extensive and very important infrastructure initiatives by the government including hydropower, the bridges, the roads as well as the water reservoirs up at Alaoa. So this is what gives importance to this program.“

The Vaisigano River project is one of eight proposals approved by the Board at its December meeting. And it wasn’t the only good news for the host of the biggest climate-funding meeting ever held in the Pacific region.

Of three approvals related to the Pacific, Samoa is involved in two. The second is a US$22 million grant for a multi-country renewable energy program with the Asian Development Bank (ADB).

“The program offers an excellent opportunity for Pacific islands countries to share experiences and learn from the innovation ongoing in the region,” said Anthony Maxwell, ADB principal energy specialist. “It will help finance transformation of the power grids in the region.“

The GCF board approved an initial US$12 million grant for Cook Islands to install energy storage systems and support private sector investment in renewable energy. This investment will see renewable energy generation on the main island of Rarotonga increase from 15 percent to more than 50 percent of overall supply.

“The GCF funding will allow Cook Islands to ramp up renewable energy integration onto the grid, and lower the cost of power generation,” said Elizabeth Wright-Koteka, chief of staff, Office of the Prime Minister, Cook Islands. “This will have significant benefits to our economy and help achieve the government’s objectives of a low carbon sustainable economy,“

To see all projects approved at the GCF Board’s December 2016 meeting, click here.