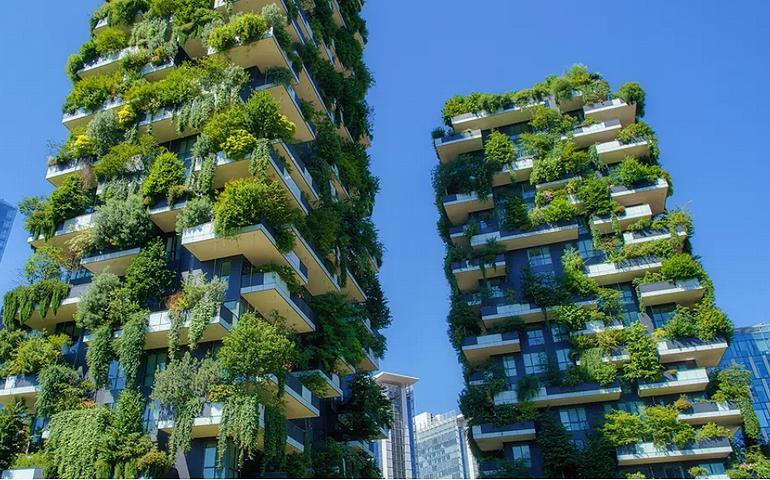 One of the biggest European redevelopment projects, Bosco Verticale, or Vertical Forest, is composed of 400 condominium units in two residential towers in Milan, Italy designed by Boeri Studio (Stefano Boeri Gianandrea Barreca and Giovanni La Varra) with input from horticulturalists and botanists. The use of heat pump technology is helping to reduce heating and cooling costs. The buildings opened in October 2014. (Photo courtesy Italia.it). Posted for media use.

PARIS, France, January 14, 2023 (Maximpact.com Sustainability News) – Energy consumption and greenhouse gas emissions in European buildings and construction have ballooned to an all-time high from lower levels during the worst of the COVID-19 pandemic. In 2021, this economic sector accounted for over 34 percent of energy demand and 37 percent of energy and process-related CO2 emissions – now the European Union is urgently activating a new strategy.

It was in 2021 that energy demands for heating, cooling, lighting and equipment in buildings grew by four percent from 2020, topping a three percent increase in demand from 2019, according to the 2022 Global Status Report for Buildings and Construction from the Global Alliance for Buildings and Construction (GlobalABC) released by UN Environment (UNEP) at the latest round of climate talks in Egypt, COP27.

This, the GlobalABC warns, means that the gap between the climate performance of the buildings sector and the 2050 decarbonization pathway is widening.

“Years of warnings about the impacts of climate change have become a reality,” said UNEP Executive Director Inger Andersen. “If we do not rapidly cut emissions in line with the Paris Agreement, we will be in deeper trouble.”

“The buildings sector represents 40 percent of Europe’s energy demand, 80 percent of it from fossil fuels,” Andersen explained. “This makes the sector an area for immediate action, investment, and policies to promote short and long-term energy security.”

The 2050 Pathways Platform is a multi-stakeholder initiative to accomplish these goals. The Platform was introduced in 2015 at COP22 in Paris by UN High-Level Climate Champions Laurence Tubiana of France and Moroccan climate scientist, entrepreneur, and politician Hakima El Haite.

“2050 pathways have a critical role to play in the transition, because having a good plan is never a sufficient condition for success, but not having one is always a recipe for failure,” said Tubiana, a French economist, academic and diplomat who was a key architect of the Paris Agreement on climate. Today, she is CEO of the European Climate Foundation and a professor at Sciences Po in Paris.

Established at the request of countries who wanted a “big tent” approach to 2050 net zero-greenhouse gas strategies, the 2050 Pathways Platform brings together governments with a network of bilateral and multilateral donors, international and national think tanks, and climate policy experts interested in long-term climate response planning. To date, 36 countries have joined the Platform since November 2016.

The European Climate Foundation maintains that Europe must change the way it heats and cools homes to avert a climate crisis and reduce its dependence on fossil fuels. Currently, energy-inefficient buildings are not renovated fast enough, and gas boilers are the EU’s most used heating technology.

In a December 2022 report, “How to Avoid Gas Shortages in the European Union in 2023,” the International Energy Agency warned of a big gas shortfall in the EU this winter but, at the same time, listed solutions to this problem.

“The European Union faces a potential shortfall of almost 30 billion cubic metres of natural gas in 2023 – but this gap can be closed and the risk of shortages avoided through stronger efforts to improve energy efficiency, deploy renewables, install heat pumps, promote energy savings and increase gas supplies, the IEA says in the report.

The report sets out practical actions that Europe can take to build on the progress that was made in 2022 in reducing reliance on Russian gas supplies and filling gas storage. But Russian supplies could fall further, global supplies of liquified natural gas will be tight, and temperatures are forecast to fall below freezing in the last week of January.

And, to be realistic, says Europe’s largest coalition of environmental groups, the European Environmental Bureau (EEB), measures adopted by governments to reduce gas and electricity consumption vary widely across Europe and seem insufficient to meet the EU’s energy-saving targets. It’s been months since European leaders agreed to reduce their countries’ demand for gas by 15 percent and electricity by 10 percent. “But the measures taken in this respect seem too patchy among EU countries,” the EEB states.

Davide Sabbadin, deputy policy manager for climate at EBB, said, “The sooner we reduce our energy usage, the quicker we reduce pressure on high energy prices, providing effective relief for households and industry. All signals tell us that filling gas storage before next year’s winter might be far more challenging. Reducing the energy demand must be the top priority for policymakers, rather than short-term measures to keep us locked into an inefficient, fossil-fuel-hungry model. The EU can definitively do more to coordinate energy-saving action among its member states.”

Pumping Heat ‘In The Media Spotlight’

Electrifying and renovating Europe’s residential buildings can cut gas imports and generate massive benefits for the economy, finds a 2022 summary report, “Building Europe’s net-zero future: Why the transition to energy-efficient and electrified buildings strengthen Europe’s economy,” by the European Climate Foundation (ECF) and the European Alliance to Save Energy (EU-ASE), based on modelling by Cambridge Econometrics. It asserts that the shift to electrified and highly efficient buildings will generate the greatest social and economic benefits for Europe.

One promising technology available right now is heat pumps – a highly efficient heating technology, which reduces household energy bills and improves a society’s energy independence. As heat pumps are already available, their high uptake could allow the EU to meet its 2030 climate goals.

A policy toolkit for global mass heat pump deployment is an ongoing project of The Regulatory Assistance Project (RAP), an independent, global, nongovernmental organization for policy innovation and thought leadership in the energy community.

RAP Senior Associate Dr. Richard Lowes of the UK told “Forbes” in an interview, “Vladimir Putin’s war in Ukraine has for the first time, put heat pumps in the media spotlight. Their efficiency means they can reduce fossil fuel demand even when they use electricity produced from fossil fuels. On electricity systems that include high levels of renewables, such as in the United Kingdom, switching from gas heating to a heat pump can cut gas consumption by around 80%.”

Dr. Lowes points out that three of the world’s largest economies already are acting in support of heat pumps.

Heat energy in the environment is inexhaustible and clean, and heat pumps are an extremely efficient way to produce heating. Because heat pumps don’t burn anything, they can also reduce local air pollution, said Lowes.

Electric heat pumps can be deployed on a large scale in Europe without jeopardising grid stability while allowing greater integration of renewable energy sources and improving energy efficiency in buildings, according to the CEOs of major energy groups, including Spain’s Iberdrola, Italy’s Enel and France’s EDF, Euractiv reported in 2021. The CEOs estimate the European electricity grid can handle 50 million heat pumps.

“Heat pumps are an indispensable part of any plan to cut emissions and natural gas use, and an urgent priority in the European Union today,” said Dr. Fatih Birol, executive director of the International Energy Agency. “The technology is tried and tested, even in the coldest of climates,” he said last November, introducing the IEA special report “The Future of Heat Pumps.”

A large deployment of heat pumps, both in individual heating systems and in district heating networks, and a high building renovation rate can halve households’ energy bills in 2050. The lowest-income households are expected to benefit most from a switch to heat pumps, the ECF and EU-ASE report.

Green jobs will be created by the uptake of heat pumps and energy renovations, many sources agree. Other goods and services produced in Europe will be needed, and some estimates predict 1.2 million net additional jobs will open up by 2050.

To meet the EU’s climate objectives, the building sector will need to achieve 60 percent greenhouse gas emissions reductions by 2030 and fully decarbonize by 2050, the report finds.

But Europe is not on track to achieve this; buildings still account for 40 percent of the EU’s total energy consumption and 36 percent of its CO2 emissions. 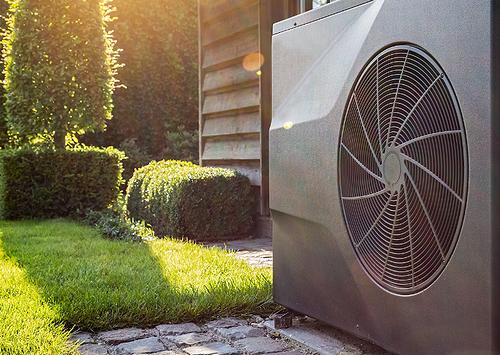 A heat pump uses technology similar to that in a refrigerator or air conditioner. It extracts heat from a source, such as the surrounding air, geothermal energy stored in the ground, or nearby sources of water or waste heat from a factory. It then amplifies and transfers the heat to where it is needed. November 2022 (Photo courtesy International Energy Agency). Posted for media use.

To reverse the trend, in 2020 the European Commission has launched the “Renovation Wave,” a strategy to upgrade the existing building stock, and has put forward legislative proposals to improve buildings’ energy efficiency and encourage heating fuel switching.

The strategy, “A Renovation Wave for Europe – Greening our buildings, creating jobs, improving lives,” identifies three focus areas: tackling energy poverty and worst-performing buildings, public buildings and social infrastructure, and decarbonising heating and cooling. Renovating both public and private buildings is mentioned in the European Green Deal as a key initiative to drive energy efficiency in the construction sector.

Mobilising forces at all levels towards these goals will result in 35 million building units renovated by 2030. The increased rate and depth of renovation will have to be maintained also post-2030 in order to reach EU-wide climate neutrality by 2050.

Some progress is being made. The French Parliament approved a new law last May requiring all new commercial buildings to have their roofs partially covered with plants or solar panels. The new requirement will apply to all new buildings in commercial zones.

The European Building Renovation market recorded a market value of US$956.88 billion in 2021 and is expected to reach up to US$1012.47 billion by 2026. The significance of building renovation is increasing as people realize that buildings are responsible for generating over one-third of all greenhouse gas emissions from the European Union.

In 2023, the focus in the EU building renovation wave will be on asbestos, one of the main causes of work-related cancers. Despite its EU-wide ban in 2005, asbestos-related risks persist.

Asbestos will be a health-risk factor in the context of the European Green Deal “renovation wave,” aiming at helping make buildings fit for a climate-neutral Europe.

The European Commission considers the Renovation Wave Initiative as an essential instrument for Europe to become climate neutral by 2050.