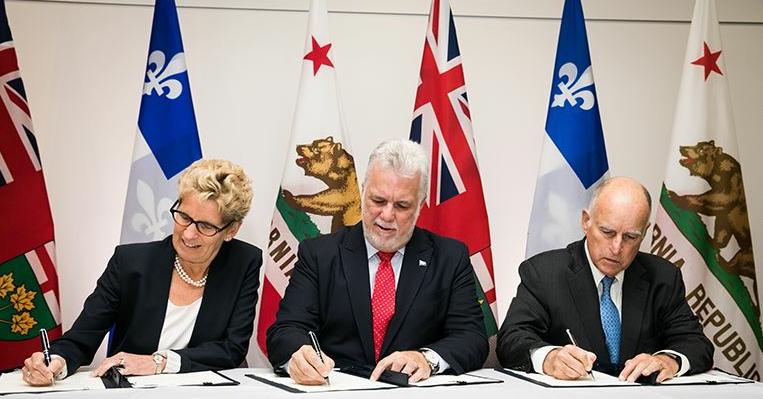 SACRAMENTO, California, September 28, 2017 (Maximpact.com News) – As President Donald Trump has abdicated his leadership on climate change by denying the legitimacy of the results produced by 99 percent of the world’s climate scientists, by defunding low-carbon efforts and embracing fossil fuels, and by declaring he will pull the United States out of the Paris Agreement, someone else has stepped in to lead on this crucial issue – California Governor Jerry Brown.

The agreement was signed in Quebec City during the 7th joint meeting of Cabinet Ministers of the governments of Ontario and Quebec.

“Climate change, if left unchecked, will profoundly disrupt the economies of the world and cause untold human suffering,” said California Governor Jerry Brown. “That’s the reason why California and Quebec are joining with Ontario to create an expanded and dynamic carbon market, which will drive down greenhouse gas emissions.”

California’s cap-and-trade program, which launched in 2012 and linked with Quebec’s program in 2014, sets a declining limit on carbon pollution and creates a market to achieve the emission reduction targets in the most cost effective manner.

Expanding the partnership to include Ontario will further strengthen this market-based system and drive additional investment in clean energy and innovation, says Brown.

A strong cap-and-trade program, together with California’s full suite of climate programs and actions, will help ensure the state can cut carbon within its borders to meet its ambitious targets to reduce greenhouse gas emissions to 1990 levels by 2020 and 40 percent below 1990 levels by 2030.

While California, Quebec and Ontario developed their cap-and-trade programs through separate legislative and regulatory processes, the three jurisdictions have worked together to ensure that their programs complement each other and provide participants in all three jurisdictions with the benefits of an expanded program.

Under the linked program, carbon allowances and offset credits can be exchanged among participants in all three jurisdictions’ cap-and-trade programs.

Ontario Premier Kathleen Wynne said, “Climate change is a global problem that requires global solutions. Now more than ever, we need to work together with our partners around the world and at home to show how our collaboration can lead to results in this international fight.”

“Today’s carbon market linking agreement will add to the success we have already seen in reducing greenhouse gas emissions in Ontario, California and Quebec. We are stronger together and by linking our three carbon markets we will achieve even greater reductions at the lowest cost.

The agreement sets forth a process for other jurisdictions to join the linked program and establishes a working model for other states and provinces that are seeking cost-effective approaches to reducing their greenhouse gas emissions.

“I look forward to continuing to work with Governor Brown and Premier Couillard on our common goals, including advocating for the adoption of carbon markets and emissions cap programs across North America and around the world,” said Wynne.

“Quebec has been active for many years in the fight against climate change,” said Quebec Premier Philippe Couillard. “We believe in concerted and coherent actions with our partners as well as in cooperation to face the challenges posed by this global challenge.”

Assuring Ontario and California of Quebec’s full cooperation, Couillard said, “We should rejoice in the progress made so far and the new milestones made today in strengthening our relations, which contribute to a more prosperous, more responsible and low carbon society.”

Known universally as Jerry Brown, Edmund G. Brown Jr. is approaching 80 years old. He was born in San Francisco on April 7, 1938. He graduated from St. Ignatius High School in 1955 and entered Sacred Heart Novitiate, a Jesuit seminary. He later attended the University of California, Berkeley, graduating in 1961 before earning a J.D. at Yale Law School in 1964.

California elected Brown Governor in 1974 and again in 1978. As Governor, he strengthened environmental protections and promoted renewable energy.

After his governorship, Brown lectured and traveled widely, practiced law, served as chairman of the state Democratic Party and ran for president.

Brown was elected to a third gubernatorial term in 2010 and to a historic fourth term in 2014. During his latest stint as governor, California has established nation-leading targets to protect the environment and fight climate change.

By 2030 the state will: reduce greenhouse gas emissions 40 percent below 1990 levels, generate half of its electricity from renewable sources, double the rate of energy efficiency savings in its buildings and reduce today’s petroleum use in cars and trucks by up to 50 percent. 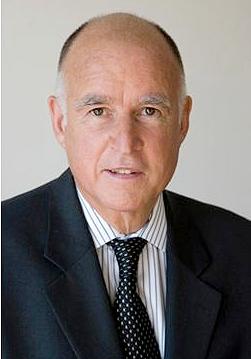 Last week Governor Brown advanced his leadership of the fight against climate change at the subnational level at events and meetings tied to Climate Week NYC, the Yale Climate Conference and the UN General Assembly.

Over the course of the week, Governor Brown met with the UN Secretary-General, opened Climate Week NYC 2017 and discussed subnational climate action from governments and the business community at events with other global leaders.

At Climate Week NYC, the Climate Group launched a groundbreaking new campaign on electric vehicles. EV100 aims to fast track the drive towards electric vehicles. By signing up, companies can use their collective buying power and influence to build demand, cut costs and remove barriers to adoption.

Governor Brown announced co-chairs for the Global Climate Action Summit , which will be held September 12-14, 2018 in San Francisco.

He highlighted state, city and business-led climate initiatives at the Yale Climate Conference and joined fellow U.S. Climate Alliance co-chairs to release a report on the progress by member states to meet their portion of the U.S. commitment under the Paris Agreement.

In response to President Trump’s decision to withdraw the United States from the Paris Agreement on climate change, Governors Andrew Cuomo of New York, Jay Inslee of Washington State, and Jerry Brown created the United States Climate Alliance. This bi-partisan coalition of states is committed to the goal of reducing greenhouse gas emissions consistent with the goals of the Paris Agreement.

In addition, the Governor participated in a wide-ranging discussion organized by the Skoll Foundation and the UN Foundation on the need to mobilize all levels of society to decarbonize the economy, signed an agreement with Denmark on water and climate issues and welcomed the Republic of the Marshall Islands and other new members to the Under2 Coalition .

Governor Brown continues to build strong coalitions of partners committed to curbing carbon pollution in both the United States through the U.S. Climate Alliance and around the globe with the Under2 Coalition.

The Governor has also launched America’s Pledge on climate change with Michael Bloomberg to help compile and quantify the actions of states, cities and businesses in the U.S. to drive down emissions.

In September 2018, the State of California will convene the Global Climate Action Summit in San Francisco, where representatives from subnational governments, businesses and civil society will gather with the direct goal of supporting the Paris Agreement.

This November, Governor Brown is expected to take part in a climate symposium organized by the Vatican and in this year’s United Nations Climate Change Conference in Bonn, Germany, ahead of which he was named Special Advisor for States and Regions.

This followed meetings in June with China’s President Xi Jinping during the Governor’s week-long trip to China and with Germany’s top environmental official, Barbara Hendricks, in San Francisco.

In recent years, Governor Brown has signed legislation establishing the most ambitious greenhouse gas emission reduction targets in North America; setting the nation’s toughest restrictions on destructive super pollutants; directing cap-and-trade funds to greenhouse gas reducing programs which benefit disadvantaged communities, support clean transportation and protect natural ecosystems; and requiring the state to generate half of its electricity from renewable sources by 2030 and double the rate of energy efficiency savings in buildings.